A chicken rice chain owner, airline CEO and church pastor have been in the news recently, apologising for their own or their organisations' mistakes. How do you say sorry like you really mean it?

Many countries, Singapore included, have seen celebrities, politicians and other public figures apologising for causing hurt and violating public trust.

Ordinary folk and leaders of organisations too may find themselves having to apologise - for inappropriate behaviour, making claims that turn out to be false or misleading, or for insensitive remarks.

As the recent slew of social media episodes (a chicken rice chain owner who insulted a taxi driver, a couple's outburst at an elderly man at a hawker centre) show, offending acts and comments can be caught on video and shared rapidly, generating public outrage.

Conversely, when someone caught in such an episode apologises and tries to make amends, as the chicken rice chain boss did by giving away packets of chicken rice to taxi drivers, that apology is also likely to receive wide public exposure. 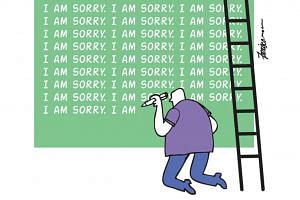 Then there is the case of the United Airlines chief executive, whose initial apology after a passenger was dragged off a flight earned him only opprobrium, and the church pastor who apologised to his congregation for "all the hurt, all the disappointment and all the painful ordeals you've been through" and for his "unwise decisions".

So what is the psychology of an apology, and how does one decide whether, how, where and what to do to apologise?

First, some common-sense observations. Whether publicly or in private, it is difficult to say sorry sincerely to someone we have offended or wronged. Being sincere requires us to say what we mean, and mean what we say. Many of us procrastinate, and then we regret not apologising earlier or at all, adding to the regret from offending in the first place.

Some apologies are effective while others are disastrous. Then, too, there is the response to the apology: Some are accepted. But others we have wronged and apologised to may be unable or unwilling to let go and move on.

SAYING SORRY IS GOOD FOR YOU

But if it is so difficult, why apologise?

Research shows that a sincere apology has concrete benefits to yourself beyond preventing retaliations or repercussions.

When we sincerely apologise, we do so because we believe it is the right thing to do, and not just because it is a social nicety or obligation. Apologising sincerely therefore fulfils our need to be congruent with our personal beliefs.

A sincere apology does not just meet a need or reduce guilt. It is empowering because we experience the courage to overcome our resistance to admit wrongdoing and say sorry. It develops self-respect and enhances self-esteem by allowing us to behave in an authentic way.

Finally, no one enjoys apologising. A sincere apology is a humbling and learning experience. It serves as a powerful reminder not to repeat the mistake in future.

How then to apologise sincerely?

Legal requirements may constrain or even dictate the wording of an apology. But many situations do not involve legal issues, and the offending party can decide whether to apologise and how to.

Research has identified the features of sincere and effective apologies. Let us call them the "Seven Rs of a Repairing Apology".

Most well-intentioned apologies only express regret and request for forgiveness. By themselves, these two features are not very effective because they are the basics expected in any apology. We need to go beyond those words and take action: recognise, reflect, take responsibility, redeem and resolve.

Research shows that sincere apologies can reduce stress and contribute to mental and physical health for both parties, especially when the apology is accepted. When we receive a sincere apology, we should let go and move on.

But the benefits of accepting apologies apply only to sincere apologies, not insincere ones. We need to distinguish between the two and understand the different psychological processes involved.

For many of us, sorry seems to be the hardest word. But some say it readily, with varying degrees of sincerity. So when responding to an apology, a reality check is necessary.

Caution is most needed when we receive crafty apologies. These come convincingly from street-smart sweet talkers, or swindlers who con people.

In crafty apologies, there is more to saying sorry than meets the eye. The apologies are not genuine. They are calculated, deceptive moves to serve some self-interest or advance hidden agendas.

Their real purpose is to induce specific feelings in the offended person or the audience to garner sympathy that is otherwise undeserved, or mobilise action that otherwise would not occur. They deny, detract and cover up motives and wrongdoings that are more severe than what is being apologised for.

Such apologies are more than insincere. They are ill-intentioned. They are manipulative strategies, and especially powerful when used by someone with a bewitching charisma but a bad character.

I suggest four ways to help discern and detect insincere apologies that are ill-intentioned.

Another reason is that when the apology is accepted and the manipulative person gets away with it, he is emboldened to offend again. Repeatedly committing similar offending acts makes further apologies ineffective and reveals the falsity of the initial apology.

Although the truth may eventually show up, much damage could be caused before that happens. So it is important to discern and not adopt the simplistic attitude that all apologies should be accepted.

It is often politically incorrect or socially undesirable to not accept an apology. We do not want to appear as "non-forgiving". But to forgive is not a virtue to be equated with mercy, compassion or gracefulness when it is done blindly.

When there is clear and severe wrongdoing, and especially when the wrongdoer is unrepentant and manipulative, uncritically accepting an apology and exalting so-called forgiveness has many unintended negative consequences.

One negative consequence is the belief that the wrongdoing is condoned or denied when it is forgiven. It reduces the moral standing of the person who forgives, and increases perceptions of moral hypocrisy when he promotes other virtues.

Another consequence is it discourages discernment and inadvertently aids more people to fall into manipulative traps.

Finally, it tarnishes the reputation of innocent others who are associated with the wrongdoer or the forgiver because they are members of the same group. The group could be one based on a common cause, a profession, a political party or a religion. Eventually, it could erode the credibility of the group's value system . This "individual to group" effect can happen easily. It is basic psychology that people are quick to make generalisations.

Scientific research can help us apologise sincerely and effectively, and repair trust violation. But it cannot provide value-based judgment in a specific case on whether it is right to apologise, what to apologise for, and when to do so.

Answers to these questions are for the parties involved to determine. They will depend on the context, including the issues, interactions and individuals involved.

But there are lessons to be learnt. Everyone makes mistakes. We all need to decide on what to apologise for and when, and learn to apologise effectively.

We should also learn to be gracious in receiving and responding to an apology, but discern true apologies from crafty ones.

Above all, say sorry sincerely, and accept apologies appropriately. It is well worth it on both ends, for the well-being of the offender and the offended.

A version of this article appeared in the print edition of The Straits Times on May 06, 2017, with the headline 'Say you're sorry: How to suss out an insincere apology'. Subscribe
Topics:
More
Whatsapp Linkedin FB Messenger Telegram Reddit WeChat Pinterest Print Purchase Article Copy permalink