Five years ago, amid talk of plans by Qantas to shift its hub for Australia-Europe flights from Singapore to Dubai, I wrote a piece saying it was a bad idea.

Singapore, which sits in the heart of the world's fastest-growing air travel market, is a more critical base for Qantas. Indeed, Australia's national carrier has repeatedly said over the years that it is focused on growing its presence in Asia.

Yet, in April 2013, the "Flying Kangaroo", wooed by a 10-year commercial alliance with Dubai's Emirates, decided to hop to the United Arab Emirates' most populous city. But just four years into the union, Qantas has decided to return to a more familiar ground.

Qantas will also add capacity on its Melbourne-Singapore sector with more flights and bigger aircraft - operating the Airbus 380 instead of the A-330.

With these changes, Qantas will no longer fly its own aircraft to Dubai, though its customers - as part of an expanded commercial tie-up with Emirates - can still travel conveniently on Emirates flights from Australia to Dubai, the Australian carrier said. From there, they can connect to other Emirates flights to Europe and elsewhere. 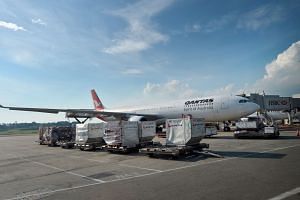 Qantas to return to Singapore's Changi Airport for Sydney-London flights

Qantas chief executive officer Alan Joyce insists that the changes do not in any way imply that Singapore is a more valued partner than Dubai. In fact, since yesterday morning's announcement, he has stressed that the tie-up with Emirates has given Qantas customers access to the Middle Eastern carriers' huge global network.

The fact remains, though, that with Qantas' decision to shift its long-haul base back to Changi, Singapore has one-upped Dubai in the race for premier air hub status. It's an important win, and not just for the glory.

While Qantas' comeback will not make Changi bigger or busier than Dubai - which handled over 83 million passengers last year compared with Changi's almost 59 million - there are real benefits for the Singapore airport.

Australia is a key market for Changi - not just as a destination but also for transit traffic.

About a third of Changi's passengers pass through on their way to their final destinations. And while actual numbers have never been given, Australia is Changi's biggest transit market.

When Qantas expands its services here from March 25, it is expected to add more than half a million passengers each year to Changi's annual traffic - not an insignificant number.

To be an effective hub, Changi must attract as many airlines as it can to fly here so that the airport is well-connected to cities around the world. This, in turn, attracts travellers who want to fly to destinations that may not be served by their own airports.

Qantas' return will give them yet another option for travel to London. It will also increase Changi's overall traffic, which has yet another advantage.

The more travellers there are, the more they spend at Changi's shops and restaurants. Because commercial takings at the airport are partly used to subsidise operational costs, this would allow Changi to set competitive fees and charges that are levied on passengers, airlines and other users.

Of course, Qantas' move will mean more competition for Singapore Airlines (SIA), for whom Australia is also a critical market. But as the carrier has always said, it is used to warfare in the air.

As a key market, Sydney was the first destination that SIA served when it started flying the Airbus 380 in October 2007.

Ten years later, SIA is said to be planning for Sydney-Singapore travellers to also be the first to experience new cabin and in-flight products that will debut on its new A-380, which arrives later this year.

Whatever Qantas does, SIA will continue to focus on the Australian market, as it always has.

As for Changi, protecting and growing its influence will continue to be challenging, with competition not just from the Middle East but also Hong Kong, South Korea and perhaps most threatening in the longer term, China.

And even as Qantas has made its decision to return to Singapore, it has also challenged Airbus and Boeing to - in five years - build a plane that can fly non-stop from Australia to London and New York. It would then take about 20 hours to get from Sydney to London, cutting total travel time by about four hours.

If this happens, Changi could once again, be faced with the prospect of a hopping kangaroo.