The news that the 72-year-old was rejoining ruling party Umno following a four-year flirtation with the opposition might have disappointed reporters, who were promised a "big announcement".

While Tan Sri Muhammad was once an Umno vice-president and Cabinet minister, he has not won an election since 1995.

In 1997 he was forced to resign as Selangor menteri besar after being charged in Australia with failing to declare the A$1.2 million cash he was carrying when entering the country.

But while Sunday's event turned out to be a damp squib, its motivations were not. Mr Muhammad was supposed to be flanked by other leaders from Selangor who were also defecting to Umno, in a bid to destabilise the opposition-run state administration.

Malaysia's richest state is a jewel which Datuk Seri Najib has long coveted. Many believe that he will secure his leadership in Umno if he reclaims Selangor, notwithstanding his failure to improve the ruling coalition's grip on Parliament and the graft allegations that have dogged him since 2015. 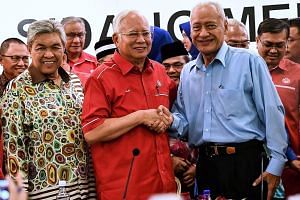 Although the plan fizzled out, efforts to win back Selangor will not, and Menteri Besar Azmin Ali knows it. The Parti Keadilan Rakyat deputy president is already breaking ranks with colleagues in the Pakatan Harapan (PH) coalition by trying to woo Parti Islam SeMalaysia, to ensure the former ally does not split opposition support and hand Umno a huge advantage going into a general election that must be held by August next year.

While PH believes it has a shot at winning federal power, a reversal in Selangor, one of two states it controls, would all but end such hopes.