The Trans-Pacific Partnership (TPP) is an agreement that helps keep the US front and centre in the Asia-Pacific and we share Prime Minister Lee Hsien Loong's hope that the United States Congress will ratify it.

On his recent official visit to the US, Mr Lee said: "Singapore fervently hopes that the US will stay engaged and maintain its indispensable role in the Asia-Pacific. In particular, we hope, and I'm sure the President shares this hope, that Congress will ratify the TPP soon."

We agree completely. The TPP is not just a Singaporean interest. It is not only about bringing economic benefits to the United States and other members either. This agreement also helps keep the US front and centre as an "indispensable" nation in the Asia-Pacific.

It hasn't even begun, yet the TPP already has been influential in the region. TPP countries - and even some that are hoping to join in the future - are changing or considering changes to their laws to meet TPP standards and rules.

President Barack Obama has now given notice to Congress that he will be sending a Bill to implement the TPP before this current administration ends. This Bill will die if the Congress does not pass the TPP before the new president and a new Congress are inaugurated on Jan 20 next year.

Given statements by both US presidential candidates, those in the region believe that if the TPP does not pass under this Congress and is signed by Mr Obama, it will be years before the US will be prepared to engage with credibility on crafting an amended trade agreement. Not approving the TPP will necessarily turn partners like Japan, Australia and Vietnam - which have faced often considerable domestic political heat over certain standards in the agreement during the nearly five years of negotiations - to those who can negotiate, sign and close a deal. And other countries, now on the outside of the TPP and looking in, will move forward without the US to engage through other initiatives with the rest of the TPP members.

The TPP clearly benefits American companies. However, Singapore-based firms will also lose out should the TPP fail to get through Congress. Tariff levels will not fall for companies trying to export goods. Services markets will not be opened. Investments will not be opened or protected to the same extent that other FTA partners receive.

The damage to US interests would be much greater than simply the loss of years of work putting together a complex agreement with a network of committed partners spanning the Pacific that is widely recognised as bringing the US economic benefits. The US will lose its pre-eminence in designing future trade and economic arrangements if it fails to join the TPP. The TPP requires that the US and Japan, plus at least four other countries, sign the deal for it to go into force. If Congress does not vote in favour of implementing the legislation needed to enact the TPP, the TPP cannot go forward - even if Singapore and the other 10 countries are ready and willing. If this happens, the TPP agreement will unravel.

American companies are already seeing the consequences of a world in which trade liberalisation occurs without the US. Australia has free trade agreements (FTAs) with Asean, China, Korea and Japan - permitting their companies much greater access with better benefits than the US gets in key sectors like agriculture and healthcare. 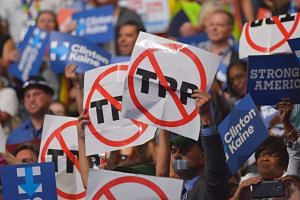 Failure of TPP will be blow to free trade and S'pore

The EU has concluded trade agreements with Singapore and Vietnam, and is negotiating with others in the Asia-Pacific, including Japan and the Philippines, giving its members greater access to some of the world's fastest-growing economies, and the most strategically important region.

Prime Minister Lee, during his US visit, said: "For America's friends and partners, ratifying the TPP is a litmus test of credibility and seriousness of purpose. We need to know that agreements will be upheld and that Asia can depend on America. Your ratification of TPP will therefore be a clear statement of your commitment and confidence in our region."

There are many ironies attached to a possible US non-ratification of the TPP. Chief among them is that without the TPP, the other Asia-Pacific nations have a Plan B, while the US does not.

Who will step in if the US steps out? Three candidates to lead on trade are China, the European Union and Australia, all of which compete directly with the US in the region. US exporters are keenly aware of the advantages lost to their competition if the US does not move ahead.

From a regional perspective, the remaining TPP members will look to the Regional Comprehensive Economic Partnership (RCEP) as the next step. This agreement lacks much of what makes the TPP so special - chapters that address business issues of the 21st century, such as those on incompatible standards, testing regulations and rules on services. The RCEP is missing the US but does include Singapore, China, Indonesia, Japan and nearly every other key US trading partner in Asia.

The European Union is pushing for trade agreements with Japan, Malaysia, Indonesia, India and others, and plans to combine together existing bilateral agreements with Asean members into a regionwide deal.

Both China and the EU use trade templates that do not match US models. Neither provides the kind of preferences to American companies, of course, that the TPP would grant.

The TPP clearly benefits American companies. However, Singapore-based firms will also lose out should the TPP fail to get through Congress.

Tariff levels will not fall for companies trying to export goods. Services markets will not be opened. Investments will not be opened or protected to the same extent that other FTA partners receive. This is true even for a place like Singapore that has many different trade agreements because the TPP provides better access to 12 markets than any previous agreement that Singapore has entered into.

Absent the TPP, firms may also lose out on provisions that will really matter going forward. For companies doing business in Asia, the real barriers to trade are often non-tariff obstacles like standards for food and food safety, product testing, labelling, and protection and enforcement of intellectual property rights. The TPP contains rules on these issues. Other trade agreements in the region do not.

Ultimately, the stakes in ratifying the TPP are not just for businesses and workers to gain the benefits of the TPP itself, but also for companies in Singapore to remain competitive. Those of us who live and work here know this first hand.

The US Congress must pass the TPP.

Steven Okun is chairman of the AmCham Singapore TPP Task Force and Deborah Elms is founder and executive director of the Asian Trade Center.

A version of this article appeared in the print edition of The Straits Times on August 24, 2016, with the headline 'PM Lee is right - this US Congress must pass the TPP'. Subscribe
Topics:
More
Whatsapp Linkedin FB Messenger Telegram Reddit WeChat Pinterest Print Purchase Article Copy permalink