Pandemics and politics: United we must stand, yet divided we run 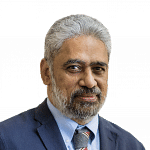 As in life, so in world affairs, what is most desirable often becomes the least possible outcome. As Covid-19 tightens its grip on the world - nearly half of humanity is under lockdown - the case for international cooperation has never been stronger. Yet, such cooperation against the virus looks less and less likely.

Almost everyone agrees that the key to managing the current crisis lies in substantive cooperation between the world's two most important powers, the United States and China. Instead of bringing them together or narrowing their differences, the war against the virus is pushing them apart. Washington and Beijing are arguing about everything - from the origins of the virus to the accountability over its spread and the potential pathways to defeating it.

The tensions between them have also infected international organisations, like the World Health Organisation (WHO), that are caught in the crossfire, and limited the prospects for forums like the Group of 20 (G-20) that were set up to deal with an emergency like the present one.

That global crises demand global solutions is common sense. But it is also quite uncommon to see sustained international cooperation amid such crises. Bemoaning the lack of cooperation is not enough; it is important to understand why such cooperation is hard to achieve.

A major source of the declining international prospects for collaboration is in the domestic politics of the world's leading powers, the US and China. The coronavirus crisis threatens to upend the domestic economic structures, with major social and political consequences for both countries.

To be sure, moments of great tragedy and calamity do compel leaders to reflect more deeply about the sources of conflict with adversaries either next door or far away. We have seen that happen in the wake of earthquakes and tsunamis.

But the mood of magnanimity tends to evaporate rather quickly. The traditional habits of thought and conventional policy impulses return soon enough to restore status quo ante. It is but rarely that disaster diplomacy ends in substantive breakthroughs.

Take for example the international response in the wake of the 2008 financial crisis. The US moved quickly to widen the Group of Seven forum to include all the major world economies. The idea behind the expanded G-20 forum was to enable better coordination of their national efforts in tackling the challenge. However, as the financial crisis eased, the expanded forum soon turned into a talk shop with limited impact.

The 2008 financial crisis also saw a profound change in the perceptions about power hierarchy in the global order. The crisis, many suggest, was an inflection point in the relations between the US and China. The Chinese Communist Party (CCP) leadership in Beijing was apparently convinced that the US was in terminal decline and that China's moment in the sun had re-emerged. As the CCP embarked on assertive policies, there was an inevitable pushback from the US over the next decade.

What we are witnessing at present is the product of the unravelling of the expansive economic integration and political bonhomie that began in the 1970s. With mutual suspicion and political contestation being the key drivers of US-China relations, it is hard to see the two governments setting aside their differences for the global good, even if their common "enemy" is a virus that is heedless of the nationality of its victims.

Much of the clamour for international cooperation tends to ignore the truism that the principal obligation of national governments - elected or selected - is to their own people. Leaders from major powers often tip their hat to the idea of global citizenship. But they are acutely aware that when it comes to the crunch, internal considerations must prevail over the international.

The natural bias amid major crises is towards taking care of yourself before assisting others. This tendency has been aggravated by the resurgence of nationalism in recent years - nowhere more intensively than in the US and China.

Even without nationalism, differences, tactical and strategic, within the ruling elites are natural when dealing with the major issues of the day. All political communities have rules by which the divisions are addressed and resolved, either publicly or behind closed doors. But major calamities test these mechanisms to the extreme.

It is not for nothing that epidemics were seen in ancient China as portending the end of dynasties. It was a little more than a superstition. Each dynasty based its claim to rule on a "mandate from the heaven". Major epidemics produce devastating effects on the economy, which in turn disturb the political equilibrium in a society. When there is a strong sense that heaven has withdrawn its mandate, the stage is set for a political rearrangement or a regime change, if you like.

Historians also point to the impact of epidemics on military and political outcomes between states from the Peloponnesian Wars in ancient Greece to the Napoleonic Wars in modern Europe.

British science writer Laura Spinney, who recently published an account of the Spanish flu that killed nearly 50 million people in 1918, suggests that the epidemic may have helped end the Great War and contributed to the social upheaval in the inter-war period, with lasting strategic consequences for the world.

Whatever the long-term impact of Covid-19, we are already in the middle of a vigorous internal and international contestation. While the Democrats and Republicans in Washington have come together to produce a massive relief package for the American people, they differ violently on President Donald Trump's strategy to beat the virus. The Democrats have seized every opportunity to berate his handling of the crisis.

We do not see such public contestation in China; but it will be surprising if everyone in the top leadership of the CCP agrees with every step that President Xi Jinping has taken in the handling of the crisis. It would be utterly wrong to presume that missteps by the top leadership in China will have no internal consequences at all.

Leaders must make difficult decisions in the fog of crises, with limited information and the inability to predict, let alone control, all the variables involved and the consequences of one's actions. Decision-making during crises is akin to war and holds the potential to disturb multiple equations within and across national borders.

There is no question the crisis has come at a difficult time for presidents Xi and Trump.

For Mr Xi, the next couple of years are of special importance. His second term as the supreme leader of the CCP comes up for renewal in 2022. Although there is no restriction any longer on the number of terms a leader can serve, this can't be taken as a foregone conclusion if the consequences of Covid-19 turn out to be serious for Chinese economy.

Well before the renewal question comes up, there is an anniversary that Mr Xi has been so eager to put his personal stamp on. It is the centenary of the CCP's founding in July next year. When he took charge in 2012, he had declared his ambitious goal to make China a "moderately prosperous society".

Although there is a sense of triumphalism in China at this moment about defeating the virus, Beijing's problems are certainly not over. It will be a long haul before things settle down and there is no telling how the situation might look.

For Mr Trump, the challenge is more immediate. The presidential election is barely seven months away. Just a few weeks ago, Mr Trump appeared to be well on his way to re-election thanks to steady economic growth and deep divisions among the Democrats. The Democrats have now closed ranks behind former vice-president Joe Biden and the US economy has been thrown into a tailspin by the virus.

Finding a winning strategy, then, is top priority for Mr Trump right now. Blaming Beijing for keeping the world in the dark and exporting the coronavirus to the world is easily understandable from Mr Trump's perspective. Calling Covid-19 the "China virus" and describing Mr Biden as the "China Joe" are also to be expected, given his penchant for slapping labels on those deemed to be threats.

China has shown no better sensibility in turning the war against the virus into a battle against the US. Accusing the US of inflicting the virus on China might seem too outrageous. But for Mr Xi, it is an important part of preventing any stigma of the virus from sticking to himself. As the coronavirus crisis casts a shadow over the political future of the two leaders, the temptation to shift the blame to outsiders is perhaps natural. Losing the war of words is not an option for either the CCP or the Trump administration.

Beyond the individual fortunes of the two leaders, larger issues are involved. The ideologues in both capitals can't let the crisis delegitimise their respective political systems.

Mr Xi wants to prove the party state has won the war against the virus at a time when the democracies are floundering.

Mr Trump can't demonstrate the success of the American model by compromising with China. Even if he has to work eventually with China, it can only be on his terms.

Some in the administration see the crisis as an opportunity to intensify the efforts to decouple America's economy from that of China. Some others see it as a necessity as well. The spread of the coronavirus has exposed the deep reliance of the US, Europe and much of the world on the production of basic drugs and medical devices in China.

It is one thing to live with economic interdependence in abstract and entirely another to accept dependence on another state, a rival and competitor, for basic health needs.

The divisions between the two countries have already consumed the multilateral system. The WHO has been a special target for the Trump administration, which believes it has been complicit in downplaying the crisis in its early stages and lulling the world into complacence. Here again, the crisis has sharpened the pre-existing concern in the US about China's growing dominance of the United Nations system.

Many in Washington and Beijing hope that ousting Mr Trump from the White House in the general elections later this year could help stabilise US-China relations and revive the world's faith in multilateralism.

But others see it as a prayer rather than a prediction, pointing to the structural reasons for the deepening hostility between the US and China and the uncertain trajectory of domestic politics in both countries.

Many are betting that there is no going back to the days when economic globalisation, free trade, open borders and multilateralism seemed irreversible. The depth and extent of change in the relations among nations will depend on the extent of impact on the economies of major nations.

Covid-19 has shaken the very foundations of the economic structures that have emerged since the 1980s. It is forcing us to take a fresh look at the balance between the state and the market, capital and labour, and the relationship between the internal and external sectors of the economy that had been taken for granted in recent decades. But the answers are unlikely to be revealed from a collective brainstorming among the world's leaders. They are more likely to come out of the inevitable shift in economic policies of major nations triggered by domestic political pressures.

A version of this article appeared in the print edition of The Straits Times on March 28, 2020, with the headline Pandemics and politics: United we must stand, yet divided we run. Subscribe