Two seemingly unrelated events that dominated headlines in different parts of the world in the past fortnight vividly illustrate the powers and burdens of technology designers.

In Singapore, the trial of Ai Takagi, co-founder of erstwhile news website The Real Singapore (TRS), revealed the various ways in which she doctored contributions from readers to fan the flames of racism and xenophobia. Capitalising on the insecurities of readers who might have feared for their livelihoods, these fabricated accounts of conflicts between locals and foreigners attracted many eyeballs, reaping reportedly over half a million dollars in advertising revenue for the website. Exploiting the viral nature by which sensational stories spread online, Takagi systematically pushed out concocted and inflammatory news reports that had significant potential to heighten local-foreigner friction.

Over in the United States, Microsoft launched to much fanfare its latest artificial intelligence (AI) creation - a robot that can respond to human interaction in online chats. This chatbot assumed the persona of an American teenage girl and was named Tay. "She" was launched on social networking site Twitter, where Microsoft demonstrated its AI capabilities by having Tay interact with Twitter users as any teen girl would. Tay dynamically responded to chats and became more intelligent over time by learning from other users. Or at least, that was the plan. The experiment descended into chaos when Tay began spewing expletives, spouting flagrantly racist assertions and endorsing attacks against feminism, amid a stream of other bigoted comments she posted. Online trolls had uncovered deficiencies in Tay's design and began feeding her abusive, offensive and discriminatory vitriol, leading her to readily echo their views. 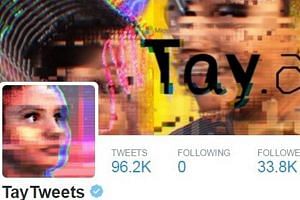 Sixteen hours and a litany of obnoxious tweets later, Microsoft aborted the experiment. Perversely, Microsoft's AI mirrored adolescent behaviour more successfully than the company realised, with Tay caving in to the adverse peer influence that teens can be vulnerable to. Furthermore, unlike Ai Takagi, who knew exactly what kind of content would provoke public outrage, Tay had not been programmed with filters to identify precisely that.

Clearly, AI was no match for Ai in this regard.

So what do these developments surrounding TRS and Microsoft's Tay have in common? In a word, values. Core societal values of peace, tolerance, mutual understanding and respect were undermined by extreme views that were released, unbridled, into public space.

Undoubtedly, the widespread dissemination of these destructive views was enabled by technology. Both events demonstrate that technology and the behaviour it facilitates can threaten the values that underpin humanity. Certainly, one could say the same about guns and genetic engineering, but our avid use of the Internet necessitates that we reflect more deeply on this question, especially in relation to everyday technologies.

In both cases, online anonymity played a critical role in facilitating the propagation of extreme perspectives. The manufactured reports on TRS were authored by an invisible hand, unseen and unverified. The online trolls, emboldened by their anonymity, could corrupt Tay with impunity. In the online environment of visual anonymity (you can't see me) and non-identifiability (you can't tell who I am), disinhibition occurs and individuals can express toxic opinions that they are less or even not likely to utter in face-to-face settings. In the online space, societal norms and conventions are less salient and requirements of decency and accountability become diminished.

Technology is therefore paradoxical in its effects - beneficent yet toxic, empowering yet crippling, amplifying yet silencing - but never neutral, despite its seemingly mechanical logic. Simply consider how technologies such as smartphones, social media and location-based services have ushered in as many advantages as they have trade-offs.

To be sure, online anonymity is not without its blessings. It offers privacy and security to those who wish to seek information and support for awkward personal problems or embarrassing health conditions. Whistle-blowers and the politically persecuted can also leverage online anonymity to advance their causes with reduced threat to personal safety.

Technology is therefore paradoxical in its effects - beneficent yet toxic, empowering yet crippling, amplifying yet silencing - but never neutral, despite its seemingly mechanical logic. Simply consider how technologies such as smartphones, social media and location-based services have ushered in as many advantages as they have trade-offs.

Departing from the premise that technology will invariably wield equivocal influence over human behaviour, how do we better imbue our innovations with values that are cherished by humanity? Technological artefacts are, after all, rooted in human imagination, forged by human ingenuity and will invariably embody and shape social, political and cultural values.

Designers of everyday technologies thus wield significant power over enabling certain behaviours while disabling others, and bear a heavy responsibility to discern one from the other. Scholars such as Professor Helen Nissenbaum therefore argue that designers must make a more concerted effort to incorporate values into their design of technological systems and objects, seeking to reflect and reconcile in their creations the values of all stakeholders. To further this goal, education must be well rounded, with emphasis on both the sciences and humanities, balancing knowledge of programming codes with appreciation for ethical codes.

Singapore is making significant strides in weaving technology into virtually every aspect of our lives. Prime Minister Lee Hsien Loong recently called for Singapore to grow its pool of engineers who can create more technological innovations to boost our productivity and enhance our quality of life. However, our designers, engineers, programmers and inventors must assiduously incorporate values into their innovation process, understanding, integrating and supporting the values that our society deems paramount. Ultimately, Singapore cannot merely be a smart nation, but must be a sentient one too.