As work becomes more precarious and workplace issues more fraught, the labour movement needs to strengthen its basic functions of workplace advocacy. Moves to consider ‘ring-fencing’ some jobs for locals are a start.

Today is Labour Day and the labour movement here is celebrating its 60th anniversary with a series of discounts for union members at the outlets it runs.

You can get hot tea and coffee for 50 cents. A range of selected "super savers" grocery items will be sold at half price until June 2. There are other deals.

As a dues-paying union member who shops at FairPrice supermarket, holds NTUC Income insurance policies and frequents NTUC Foodfare and Kopitiam foodcourts, I am happy with the discounts.

I am also mindful, on a day that commemorates labour, that unions and labour organisations have fought hard, long and well for workers' rights, all over the world. In Singapore, especially, the National Trades Union Congress (NTUC) has been a major contributor to industrial relations harmony.

But as a middle-aged worker on the wrong side of 50, in a highly disrupted industry (media), who may have another 15 years or so of work life ahead, I would have liked a more substantive programme of activities to mark the labour movement's 60th anniversary.

I was cheered to hear NTUC secretary-general Ng Chee Meng say a task force on PMEs (professionals, managers and executives) is looking at ways to protect some jobs for locals, and considering introducing an unemployment insurance scheme. These moves matter more to me than discounts.

To be fair, the discounts are nothing to be sniffed at. They amount to about $20 million and stand to benefit more than 600,000 members and their families. Mr Seah Kian Peng, group chief executive of NTUC Enterprise and FairPrice Group, said: "Through our union member deals which commemorate NTUC's 60th anniversary, we strengthen our resolve towards our social mission and generate further value for members and their families."

Discounts are always welcome, especially when incomes are falling and job losses are imminent. But while labour leaders generously give money away, I would have liked to hear more about efforts to help workers prepare for the future of work.

In particular, I hope the big questions around work, the future of work, labour rights and protection, are causing labour leaders sleepless nights, the way they do workers. What's being done to make sure our much-vaunted system of tripartism remains relevant in a post-Covid-19 world? Will consensus fray when more jobs are at risk, or when locals feel threatened by foreign hires? Or when fewer permanent full-time contracts are offered and more people get hired on short-term contracts, or part-time contracts? How can labour rights be protected for gig economy workers?

NTUC has a rich suite of programmes to help workers at various levels and across sectors. It is a key champion of raising wages in low-skilled jobs via its progressive wage model framework in the cleaning, security and landscape sectors, among others. Its e2i (Employment and Employability Institute) helps about 120,000 people yearly to reskill or with job placements. It is pushing for freelancers to be allowed to join unions. Its PME task force looks on track to make a difference.

In Singapore, tripartism has helped create conditions for decades of nearly full employment and real median wage increases that few developed countries can match. Union membership has been rising and hit 943,000 in 2018. NTUC wants to hit 1.5 million members by 2030.

What it needs now is an update to its raison d'etre to bring it squarely into a post-Covid-19 world where ongoing digital disruption meets pandemic preparedness.

The current model of consensual, not confrontational, tripartism was set after the 1969 modernisation seminar.

In the 1960s, Singapore workers routinely went on strike. After independence and the withdrawal of the British from their naval bases, economic survival required a climate of industrial peace. A series of legislation was passed that stripped unions of some of their power. Functions like recruitment, transfer, promotion and dismissal of staff were classified as management functions, and could not constitute the basis for a labour dispute. NTUC unions helped create a climate of peaceful relations.

One resolution from the seminar was to develop a workers' cooperative movement to provide essential goods and services to keep prices low for members. Thus was born the slew of NTUC cooperatives, now rebranded as social enterprises. Today, NTUC Enterprise owns or runs supermarkets, food stalls, and eldercare, childcare, healthcare and insurance services. It also runs a few golf and recreation clubs.

The move into direct services proved a winner for the labour movement, in improving its value proposition to union members through the decades of full employment when there were fewer workplace grouses. Many people of my generation for example (who started work in the booming 1990s) joined NTUC not for collective bargaining or workplace dispute resolution, but for the rebates and discounts at its many co-ops.

Employment is precarious in many sectors, across age groups.

Many companies face existential threats from technological disruption. Whether they downsize, shut down or change business, companies will shed jobs, and many people will be out of work. Unemployment for Singaporeans was 4.2 per cent in March, up from 3.3 per cent in 2019 before Covid-19.

Meanwhile, platform companies sprouting up across sectors are offering work without certainty of hours and without paid holiday leave or medical benefits. 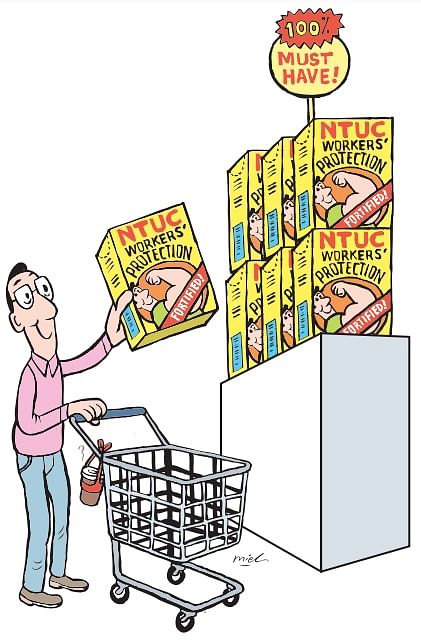 The global pandemic is also shutting down many physical offices and moving work online. This makes competition for work increasingly global as people can work remotely from anywhere, putting workers in high-cost cities like Singapore at a disadvantage.

A survey of 14,480 private and public sector organisations in Singapore found that remote working was possible for 57 per cent of the PMET ( professional, managerial, executive and technician) job vacancies. It wasn't clear if these vacancies could be filled by people outside Singapore.

Even the very notion of work is in question, as robots and automation taking over human functions can create mass unemployment.

In such an environment, workers will want a labour movement that is a watchdog to ensure employers don't cut corners in recruiting, retaining, rewarding or retrenching workers.

Consensus is well and good; but if confrontation is needed, they will want unions to confront.

A few incidents in recent years show that NTUC is not averse to quiet confrontation.

Last July, NTUC and three unions said they put a stop to unfair retrenchment practices by aircraft maintenance firm Eagle Services Asia. The unions involved were prepared to take legal industrial action - which would include going on strike. But this was not needed when the management resumed talks and changed its retrenchment practice.

In an interview last year, NTUC deputy secretary-general Cham Hui Fong cited another instance of averted industrial action "a couple of years back" over unfair practices, but did not give details.

It being May Day, we should recall that labour movements began in early 19th century Europe, especially Britain, as a way for workers to group together to bargain for labour rights with employers. Incentives like paid holiday leave, medical leave and family and maternity leave were among benefits hard won by unions and labour organisations.

NTUC to push for law change to better represent freelancers

NTUC to push for progressive wage model in higher-paying sectors

Ironically, it is precisely some of these employee incentives that are being denied to a growing pool of workers who are part-timers, temporary workers, freelancers or just generally, gig workers. Regular resident freelancers in Singapore now number 228,200 - the highest in at least five years.

The casual workforce, as this group of workers is sometimes called, is likely to grow, as companies scale down or outsource functions and as more people prefer flexible work arrangements. The group of workers who need help getting labour protection will grow.

In the United Kingdom, unions are growing their membership numbers during the pandemic, as fear of redundancies and workplace safety concerns rise amid the pandemic.

What this means is that the labour movement has to go back to its roots as a champion of workers' rights.

Beyond taking up individual disputes, and protecting labour rights, the labour movement should also organise itself to become a credible voice and workers' advocate, and a policy partner on labour issues.

Singapore is fortunate to have a government that is highly pro-worker - just witness the multibillion-dollar programmes to co-pay wages for employees, and give generous income support to the self-employed this pandemic.

But there is no substitute for a worker-centric labour organisation devoted to championing workers' rights in a free market economy.

For decades, the NTUC has had a symbiotic relationship with the ruling People's Action Party, with the NTUC leader also given a Cabinet post.

This shifted when Mr Ng lost his PAP MP seat in last July's general election but remained NTUC secretary-general. Mr Ng's ambiguous position - in PAP leadership ranks but outside the Cabinet - gives him leeway to adopt positions which might be more autonomous.

As a union member, I would like to see NTUC develop its intellectual capabilities to be a more effective workers' advocate, even as it works with the Government and employer groups to create a pro-worker and pro-business environment.

For example, the labour movement could track a few indexes to measure workers' welfare each year. One example could be the wage share of the gross domestic product. It could also track wage inequality, looking at the ratio of median-to-CEO pay in different sectors. This could form the basis of recommendations on wage increases or sharing of profits with employees, which affects wage share of income.

It can devise a pilot study of minimum wages in a particular sector and test out whether a sectoral minimum wage is a better way to raise wages at the bottom than the progressive wage model.

When free trade agreements are signed, the labour movement should have a position on their impact on workers.

In the recent debate between doctors and insurance companies on health insurance benefits, the labour movement could have stepped up to speak up for workers (many of whom are patients).

As workplace issues become more fraught in a rapidly changing economy, workers will need a strong champion by their side. Union members like me look forward to NTUC taking up (metaphorical) cudgels on our behalf. Even as we enjoy 50-cent coffee.