It was supposed to be a fortnight when the "Save Malaysia" movement gained momentum for a popular revolution, with its 45 main proponents from across the political divide speaking to grassroots politicians and civil activists at the March 27 conference to kick-start the ouster of embattled Prime Minister Najib Razak.

Instead, it quickly petered out, with two public rallies fizzling out to underwhelming crowds just a stone's throw from the iconic Petronas Twin Towers, where long-serving former premier Mahathir Mohamad once held court on the 86th floor as the adviser to Malaysia's biggest company, oil and gas firm Petronas.

On the other hand, Datuk Seri Najib scored far more telling victories: A parliamentary probe cleared him of criminal wrongdoing in the long-running 1Malaysia Development Berhad (1MDB) controversy, and he gained the public support of two key Umno stalwarts that dealt a body blow to Tun Mahathir's efforts to cajole the party he had led for 22 years to turn against his successor.

One Umno elder was another former premier, Tun Abdullah Badawi, who was appointed on March 25 to replace Dr Mahathir as Petronas adviser. Mr Abdullah had handed over the reins to Mr Najib in 2009, having succumbed to attacks by Dr Mahathir. In reprising his attacks against a sitting premier, Dr Mahathir is finding Mr Najib a harder, faster and stronger foe than the many rivals he has sunk over the past three decades. 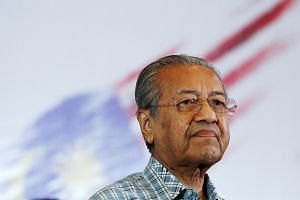 The other Umno stalwart was Malaysia's longest-serving MP Tengku Razaleigh Hamzah, himself touted as a prime ministerial-hopeful. Datuk Seri Razaleigh sat alongside Dr Mahathir last October in condemning Mr  Najib's abuse of power to fend off criticism over graft allegations.

But on March 24, he signed a "Kelantan Declaration" by Umno leaders from the north-eastern state, expressing support for Mr Najib's leadership. He also denied claims that he had spearheaded an attempt to convince ruling coalition Barisan Nasional (BN) lawmakers to revoke the parliamentary majority the Prime Minister now securely enjoys.

While Mr Abdullah's appointment is more of a slap in the face of Dr Mahathir and symbolises the extent of the current premier's powers, the co-opting of Mr Razaleigh closes off the main avenue for further revolt within the ruling Umno. The Gua Musang MP has been the leading compromise prime-ministerial candidate for the opposition since it first hatched plans to grab defecting MPs and form a government in 2008.

Sources told The Straits Times that the influential Kelantan royal - who in 1987 nearly defeated Dr Mahathir for control of Umno - had been counted on to deliver as many as 10 MPs from the ruling coalition.

But Mr Najib, at his most secure among the ruling elite since allegations that billions were missing from state investor 1MDB became widespread a year ago, will still need to face the electorate in a national vote that must be held by 2018. It is here that the Public Accounts Committee's recent findings on the state investor may yet hurt him.

Several offshore transactions remain unexplained, and these are most closely linked to the up to US$1 billion (S$1.4 billion) deposited in his private accounts that he says is made up of donations from the Saudi royal family.

The bipartisan parliamentary panel also called for the removal of provisions that make Mr Najib's approval a requirement for any major decision in 1MDB, having heard in their inquiry that the company's management repeatedly utilised the Prime Minister's powers to bypass its own board as well as officials from the finance ministry, which owns 1MDB.

With public support waning over hurting pockets and disquiet over whether the Premier used 1MDB - where he heads the advisory board - to enrich himself and fund election campaigns, it's time he got down to the business of governing. He can ill afford to drop the ball on the economy and the quality of life issue as he keeps one eye on the campaign to oust him.

Analysts note that it is bread and butter issues that have driven away support even from Umno's traditional vote bank of rural Malays. At the end of last year - one of the most difficult for the economy since Mr Najib took power seven years ago - a survey by respected pollster Merdeka Centre found only 31 per cent of Malays were happy with the government: the first time that Malay support fell below 50 per cent. Less than a quarter of all Malaysians were happy with the administration.

The government last year introduced the unpopular Goods and Services Tax (GST) and cut subsidies. Related industries struggled as the crucial oil and gas sector was brought to its knees when petroleum prices fell by two-thirds from mid-2014.

"He should use his moment's respite to restore his technocratic standing - settling debts and boosting industry. He can count on a fractious opposition, an ethnically polarised electorate and a forgetful public," Professor William Case of the City University of Hong Kong's Asian and international studies department told The Straits Times.

But with both private and public finances squeezed from the oil crash, and the GST taking its toll on domestic consumption, Mr Najib is struggling to find fiscal room for manoeuvre. The administration is now forced to tighten scrutiny of tax evasion and monetise spectrum licensing for telecommunications, with other similar "money from thin air" plans in the works.

The Straits Times understands that the ruling establishment is gathering feedback on a possible snap election this year, given the disarray within the opposition.

If the BN can squeak by while there is no viable alternative, it will give the Prime Minister a five-year berth, instead of just two, for global economic conditions to improve so he can work on pledges to improve the well-being of low-income earners, who make up the bulk of the population.

"Mahathir has no impact at this point. It's a mistake for an Umno leader to be in bed with DAP," said a top government official, referring to the former strongman's decision to work with the opposition Democratic Action Party, portrayed for decades as anti-Malay by the pro-government media.

But having won the first rounds of the battle against Dr Mahathir & Co in the past year, Mr Najib will probably feel he can make even more headway in the short term against the sputtering campaign to depose him. If the proponents of "Save Malaysia" continue harping on abuses of power, and fail to convince the public that their daily lives will be better off with a new leader, it won't make a bit of difference to the all-important rural vote.

"Mahathir is simply having a taste of his own medicine," said University of Tasmania's Asia Institute director James Chin, referring to the former premier's self-admitted dictatorial tactics to stay in power for over two decades.