President Donald Trump's favourite Twitter hashtag is #MAGA, which of course stands for "Make America great again". His critics often complain that this implies America is not great now, whereas, in fact, it is much better than ever in terms of crucial metrics such as the number of community organisers in Chicago, the shooting range - sorry, spiritual home - of the Obama years.

But Mr Trump's supporters know just what he means: Make it the 1980s again. For those older age groups that broke decisively for the Republicans last November, this is one last chance to turn the clock back to when they and their country were in their prime.

Last Friday's inaugural address by Mr Trump was thus fascinating both for its similarities to Mr Ronald Reagan's 1981 inaugural and for its differences. Both painted a picture of economic stagnation. Where Mr Trump spoke of "rusted-out factories scattered like tombstones across the landscape", Mr Reagan lamented "idle industries... unemployment, human misery and personal indignity".

Both Mr Trump and Mr Reagan made clear that the time was up for malaise. "This American carnage stops right here, and stops right now," said Mr Trump. "Let there be no misunderstanding," declared Mr Reagan. "We are going to begin to act, beginning today."

Both blamed America's economic troubles on the federal government. "Politicians prospered, but the jobs left and the factories closed," said Mr Trump. Thirty-six years ago, Mr Reagan declared: "Government is not the solution to our problem; government is the problem."

And both identified themselves as populists. "What truly matters is not which party controls our government," said Mr Trump, "but whether our government is controlled by the people."

Mr Reagan used similar language: "Our concern must be for a special interest group that has been too long neglected... 'We the people'."

Likening Mr Trump to Mr Reagan is a dangerous thing to do. But my point is not that they are the same. It is that their circumstances are similar. The left despised Mr Reagan as they despise Mr Trump. Both men found fame on the screen before entering politics. Both succeeded a Democrat who was seen as weak on foreign policy.

It is not accidental that Mr Trump has talked about a summit with Russian President Vladimir Putin, perhaps in Iceland. Reykjavik was the scene of the most famous of the meetings between Mr Reagan and Soviet leader Mikhail Gorbachev in 1986.

Yet, this is not "morning again in America", as Mr Reagan's 1984 television ad put it. In Mr Trump's America, it feels more like twilight - the twilight of the era of economic globalisation that the Reagan administration kicked off, for the most striking feature of Mr Trump's inaugural address was its overt protectionism. "Protection will lead to great prosperity and strength," said Mr Trump, once again using the 1930s isolationist slogan "America first". His said his administration would apply "two simple rules: Buy American and hire American". 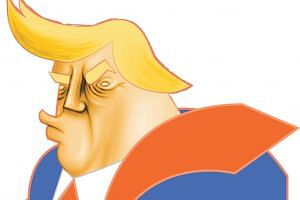 Trump is not our man, says Russia

Like all presidents, Mr Trump will be judged by how far he makes good on his pledges. In one of his debates with Mrs Hillary Clinton, he talked of raising the United States growth rate "from 1 per cent up to 4 per cent" and perhaps to "5 per cent or 6 per cent". He intends to achieve this not only through protectionism but also through tax reform and deregulation, though neither was mentioned last Friday.

On foreign policy, Mr Trump is an avowed realist who asserts "the right of all nations to put their own interests first", and has no intention of imposing the American way of life on anyone. The sole exception to this is "radical Islamic terrorism, which we will eradicate from the face of the earth".

It is important to distinguish between the real and the imaginary obstacles Mr Trump faces. In the latter category are the leftist hooligans who ran amok in Washington last Friday, liberal journalists who insist Hitler has come to power and Hollywood stars who cannot stop whining.

The real obstacles for Mr Trump are as follows. First, voters - especially the independents and late deciders who voted for him last Nov 8 - are fickle. Polls show that his approval rating has fallen over the past month, which almost never happens between an election and the inauguration. No president has entered the White House so unpopular.

Second, key Republicans, especially in the Senate, feel little loyalty to Mr Trump. If the investigations into Russian meddling in the election turn up compromising evidence, do not expect Mr John McCain or Mr Ted Cruz to shed tears at the prospect of Mr Mike Pence following in the footsteps of Mr Gerald Ford. And even if "Wettergate" goes away, Senate leader Mitch McConnell and House Speaker Paul Ryan will largely control the direction of the administration.

Third, precisely because this is not the 1980s, the economy may not deliver. The Federal Reserve expects growth of between 1.9 per cent and 2.3 per cent this year, and slightly less next year. That is half of Mr Trump's target. Meanwhile, Congress may pass tax cuts but raise no additional revenue, leading the deficit to balloon. The Fed will then raise interest rates.

Finally, there is China. In 1981, the Chinese economy accounted for less than 3 per cent of world output. Today, it is about 18 per cent. "America first" has a ring to it in a speech, but a whole library of economic history implies protectionism could backfire badly.

With all respect to Mrs Theresa May's argument for a "global" Brexit, the other big speech last week was Chinese President Xi Jinping's defence at Davos of globalisation. "Pursuing protectionism is like locking oneself in a dark room," Mr Xi said. "While wind and rain may be kept outside, that dark room will also block light and air. No one will emerge as a winner in a trade war."

Today, the artist of the deal begins to get acquainted with what could be his two biggest foes. One is Washington's ruthless political class, personified by Frank Underwood, the anti-hero of political drama House Of Cards. "The road to power is paved with hypocrisy and casualties," says Underwood in one scene. "The president is like a lone tree in an empty field: He leans whichever way the wind is blowing."

Mr Trump's other big foe could be China. The Art Of War was written by Sun Tzu 25 centuries before The Art Of The Deal. "So it is said that if you know your enemies and know yourself, you will not be put at risk even in a hundred battles," writes Sun. "(But) if you only know yourself, but not your opponent, you may win or may lose."

No one should underestimate Mr Trump. But MAGAlomania alone will not be enough if he underestimates his enemies.