South-east Asian states should understand the region's strategic realities. They should focus on building relations, and respond with resolve and restraint, after the Permanent Court of Arbitration ruling on the South China Sea.

Today, the Permanent Court of Arbitration (PCA) will issue its ruling on the Philippines' case against China's territorial claims in the South China Sea. Many worry about China's possible response to what is widely expected to be a ruling against its favour, and the implications for the region's already-choppy strategic waters.

This international legal confrontation comes amid the region's descent into a maritime insecurity spiral since the April-June 2012 stand-off at Scarborough Shoal between Chinese maritime security forces and the Philippine Navy. That incident ended with Chinese control of the disputed feature and Manila initiating legal arbitration proceedings in The Hague.

The following year, tensions escalated between China and Japan over the Senkaku Islands, and China declared an air defence identification zone over parts of the East China Sea in November 2013, triggering fears of a similar move in the South China Sea. In mid-2014, the state-owned China Offshore Oil Corporation placed a giant oil rig close to the Paracel Islands disputed by Vietnam.

Since mid-2015, the US military has conducted overflights and three publicised freedom-of- navigation operations in the South China Sea, to challenge China's maritime territorial claims.

Meanwhile, Indonesia and Malaysia have responded more strongly to incursions by Chinese fishermen and security agencies in their maritime territories, and Asean has again demonstrated apparent disarray on the South China Sea issue in recent months. Today's legal ruling, regardless of the result, will be difficult to enforce. To forestall an even more intense security dilemma in the South China Sea, regional policymakers should not lose sight of four vital underlying strategic trends.

First, the power asymmetry and economic interdependence between China and South-east Asia will continue to grow. While this does not mean that China's smaller neighbours should give up their territorial and resource claims, out of national interest they do necessarily have to sustain relationships with China that are wider than just the South China Sea disputes alone.

Second, the United States is no longer the only great power operating in maritime South-east Asia. As China's military capability and economic interests expand, it wants to secure access to the region's sea lanes, territories and economic zones. This obliges both Washington and Beijing to find mutually acceptable rules for maritime usage, if only because neither wants to go to war over rocks and islands per se.

Third, China is most likely to continue on its path of national development within the existing international order, rather than by forging a new order - because it has benefited enormously from it, and its key economic partners sit within it. Ultimately, because China's successful domestic economic transformation could be undermined by regional instability, we may expect the Chinese leadership to temper the excesses of its territorial claims.

For a rising power like China, the downside of accepting the existing order is having to give less powerful states more regard than their capabilities alone deserve, such as by respecting unfavourable international legal rulings. Yet, the upsides are significant, because many existing international rules also favour the more powerful - for example, as China develops more long-range naval capabilities, its leaders and military too will appreciate the right to "innocent passage" in others' territorial waters and to military activities in their exclusive economic zones, which they currently oppose for the US.

Fourth, the most dangerous element of the South China Sea disputes is not island-building, territorial claims or freedom of navigation, but rather intense competition over rapidly declining fishery resources in the South China Sea. Armed disputes over fishing grounds have long been fairly common in the area, but these are now exacerbated by large-scale commercial fishing.

Where does this leave South-east Asia the morning after the PCA ruling? If it delivers, as many anticipate, an authoritative judgment against the legal basis of China's claim on territorial waters within its "nine-dash line", the Philippines (and other claimants) will secure important moral high ground in the disputes. 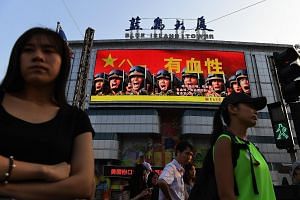 Yet, the judgment by itself will also not wipe clean the South China Sea slate; the region will still face the same knotty problem of seemingly irreconcilable territorial and resource claims.

Therefore, all parties should seize the opportunity offered by this legal juncture to regroup and refocus on the wider strategic picture.

The Asia-Pacific region will have to live with the South China Sea disputes for a long time to come. Effective management of these disputes will entail three essential elements:

•Relationship
As South-east Asians well know, China is not going to go away. But this region is adept at creating complex and delicate relationships with powerful states so as to be able to survive and prosper in their shadow. Focusing on the relationship means acknowledging and upholding the PCA ruling, while resisting the temptation to beat China over the head with it. This entails leaving it some room for manoeuvre so that Beijing is able to find a way to step out of the spotlight. More urgently, South-east Asia needs to work with the US and other partners - Japan, India, Australia - to convince Chinese leaders about the value of stabilising China's relationship with the region, which is also more comprehensive than just the South China Sea disputes alone.

•Resolve
Because of the intractable nature of the rival territorial claims, all parties have to live with higher levels of tension in the South China Sea going forward. Credible and intelligent resolve will be required to prevent localised disputes from spilling over into large-scale armed conflict and to deter aggression by rival claimants. In this regard, there is widespread support from South-east Asian states for the US military presence in the South China Sea, and for continued assistance by the US and its allies like Japan to boost maritime surveillance and defensive capabilities of claimants such as the Philippines and Vietnam. Regardless of differing views about the right to "innocent passage" by military craft within other states' territorial waters , the US will act to uphold that principle. But intelligent resolve requires that freedom-of- navigation operations are not deliberately politicised and publicised in order to castigate China. If the PCA rules against China's claims to territorial waters associated with its artificial islands, the legal point would be won, and in principle the question of freedom of military navigation becomes moot. In that context, politicising such routine operations in international waters would paradoxically legitimise China's sovereignty claims, by suggesting that China's sovereignty claims have merit. Moreover, everyone should expect to extend to Chinese forces the same right to innocent passage in regional and international waters. Note also that deterrence policies will elevate tension, because shows of force tend to generate similar responses. For instance, the military elements of the Obama administration's rebalance to maritime East Asia were met by China's militarisation of the South China Sea disputes, and both sides have upgraded maritime military exercises in the region to rival displays of strength. Ultimately, coercing China into halting its island building or resource exploitation will require actions like blockading Chinese forces or destroying Chinese construction - offensive actions that are likely to trigger war. For the South-east Asians whose lives, lands and seas will be the actual theatre for such a conflict, a more attractive bet will be trying to bring about voluntary limits to these claims.

•Restraint
The PCA ruling should not detract from the longstanding conundrum of how to agree on a code of conduct for the South China Sea. Indeed, developments since 2012 make it clear that we need an even more comprehensive code. In order to prevent accidental conflict escalations, some form of agreement such as the Code for Unplanned Encounters at Sea (Cues) is needed. As the Singapore Government has suggested, for the South China Sea, Cues will have to cover not only naval incidents but also encounters between coast guards. To cultivate restraint by claimant states in pursuing their rival territorial claims, the Asean-China South China Sea Code of Conduct (CoC) remains the most promising avenue. But a negotiated moratorium of activities under the CoC will now have to cover an expanded list of activities, including blockading features occupied by others and island construction. Given the trend of building islands that may be significant enough to generate claims to territorial waters, the CoC will also have to grapple with defining such features and delineating disputed and undisputed areas. Furthermore, the urgent problem of managing conflicting resource claims, especially fishing grounds, will need to be tackled either within the CoC process or independently of it. Regulating restraint in the South China Sea is a very tall order, which requires South-east Asian leadership. The most important response South-east Asian states must have to today's ruling is to make constructive political hay from their moral high ground. One assured way to do this would be for Asean to push forward with agreeing among itself the outline for a CoC consistent with international law that all its member states can first commit to upholding. Having demonstrated unity in restraint, regional states can then hope to persuade China and other players to sign up.

•The writer is the Shedden Professor of Strategic Policy Studies at the Australian National University.