Lately, there has been much talk of a lack of "social mixing" across class lines. Certain neighbourhoods are over-represented by those with high income, and some schools have acquired a narrow student body composition of a disproportionate number of children from wealthier families.

We hear that people are friends primarily with others of similar class backgrounds, and that they are rarely drawn to those in different levels of society. Some surmise that this is bad as the privileged ones will not develop empathy for those not equal in status. It is implied that a key solution to inequality lies in greater mixing.

This is misleading. The lack of mixing is one way that inequality manifests in our society, but it is an effect, not a cause, of class division. The main mechanism shaping the development of friendships is not preference, but circumstances - how people find themselves in the same space. To address the problem, we must consider how those circumstances are generated.

Watch children play and you will see that their radar for similarities and differences, and their openness towards other kids, are in contrast to adults' more closed-minded and tribal habits. They make friends with whoever happens to be in their space. Thus, one major and entirely arbitrary reason for my friendships with certain secondary school classmates is that, being about the same height at age 13, we were assigned to sit near one another.

If the networks that many Singaporeans develop in school are class-biased, it is not because we are drawn to people like us and repelled by those unlike us in class background. Rather, we became friends with people who were, simply put, there. The problem is structural, not cultural; a matter of architecture, not taste.

How do people come to be in the same space? Why are classrooms - and, therefore, people's personal networks - class-segregated spaces?

Besides height, what else explains who sat next to me at age 13? We were in the Special stream, taking Chinese as a first language. Not being among the top scorers in our PSLE cohort, we were in a class somewhere in the middle of our school's hierarchy. Two years later, on further sorting, we became science-stream students with a specific subject combination. Based solely on prowess in memorisation, it was determined that we were suited to studying the subjects that would lead us eventually to junior college and then university.

The obsession with entering certain schools cannot be alleviated by finding more ways to do so; instead, elite schools must be made less attractive. This is done when the rewards that are reaped from attending these schools are reduced, while the rewards from going to neighbourhood schools are enhanced.

How do children come to be around one another and, thus, make friends? Because they are streamed into the same space. Why are kids from certain class backgrounds increasingly streamed into certain spaces? Because class background, which buys tuition and enrichment programmes outside school, increasingly aligns with how one performs in school and is rewarded at the workplace.

The design of systems, not people's individual tastes and preferences, explains the lack of social mixing. This lack is the effect of a highly stratified education system, not its cause.

How do we expect mixing to reduce inequality? I have not seen this question seriously addressed.

Perhaps the idea is that empathy is necessary for more support for redistribution. Perhaps we want all schools to be experienced as good schools.

To solve problems, we must identify causes. In the case of schools, the cause lies in a system that sorts and differentially rewards students, increasingly demanding from students capacities that are developed through private resources outside school. In many schools, kids are streamed into specific classes, or subject combinations, increasing their chances of sitting next to people of similar class backgrounds.

There is now intense discussion about elite schools. We should not obsess over Raffles Institution (RI) or other schools deemed elite. Our current state is neither the fault nor the immediate responsibility of the kids currently in these schools. It is neither healthy nor fair to focus unduly on them.

Fixating on a handful of elite schools distracts us from the big-picture problems that result from the logic of differentiation and hierarchisation deeply embedded across our education and other systems. 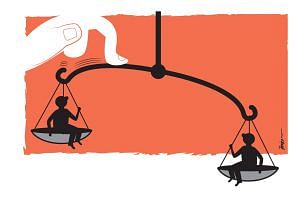 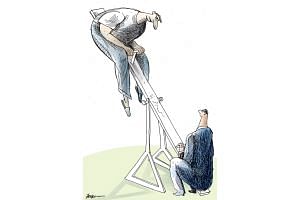 Reducing inequality in Singapore: A level playing field is no walk in the park

Instead, attention should be on the problem of different outcomes - in wages, in meeting needs, in well-being - that follow from separate and hierarchised educational pathways.

Whatever number of children from lower-income households RI takes in, there will always be more kids from higher-income ones, as long as the overall system of sorting and hierarchising exists, as long as there are narrow, class-biased criteria for what counts as merit, and as long as adult well-being is deeply linked to education pathways.

The obsession with entering certain schools cannot be alleviated by finding more ways to do so; instead, elite schools must be made less attractive. This is done when the rewards that are reaped from attending these schools are reduced, while the rewards from going to neighbourhood schools are enhanced. With a more egalitarian spread of rewards, parents will have fewer incentives to send their kids to just a handful of elite schools.

Targeting social mixing, treating it as if it is the cause of inequality rather than a symptom, is problematic. It risks allowing an urgent problem to continue intensifying.

Education Minister Ong Ye Kung stated recently that the education system needs to move towards recognising multiple strengths and being less stressful. I agree. To allow parents, students and teachers the space to change their habits, this rhetoric must be accompanied by decisive structural moves away from the current high level of sorting, differentiating and hierarchising in schools.

Only then can kids of all backgrounds, with myriad strengths, find themselves sitting next to each other in classrooms.

•Teo You Yenn is an Associate Professor and Head of Sociology at Nanyang Technological University, and author of This is What Inequality Looks Like (Ethos Books, 2018).

A version of this article appeared in the print edition of The Straits Times on June 07, 2018, with the headline 'Lack of social mixing is a symptom of inequality, not a cause'. Subscribe
Topics:
More
Whatsapp Linkedin FB Messenger Telegram Reddit WeChat Pinterest Print Purchase Article Copy permalink