Returning after years overseas, a writer finds life at Farrer Park has much to offer that should not be lost

It is such a delight to wake up on Sundays to the sound of laughter and cheering drifting up to my flat from Indian migrant workers playing cricket down below on Farrer Park fields.

The words are not discernible but the spirit of joy is loud and clear, even from my 19th-floor Housing Board (HDB) flat.

They play cricket in their flip-flops, while their friends sit along the perimeter of the field, under the shade of raintrees, to watch the game. It reminds me of languid summers in England when men in white did the same thing. And also of life in my former kampung.

Farrer Park, located between present day Little India and Pek Kio, was named after R. J. Farrer, who was municipal assessor and later president of the municipal commissioners in the 1920s. The first racetrack, called Serangoon Road Race Course, was established at Farrer Park in 1842 and was subsequently renamed the Singapore Sporting Club before it became the Singapore Turf Club. In 1933, it was moved to the Bukit Timah Race Course.

An airstrip was also created in the historic racecourse grounds. On March 16, 1911, Singapore aviation history began when a British Bristol Box-kite biplane took off from this racecourse. In December 1919, this was where the first aircraft landed in Singapore (apart from exhibition flights).

What used to be the grandstand for the racecourse became a sport house after the move to Bukit Timah. Playing fields were created and opened to the public. Today, the playing fields are still being utilised for football, baseball and cricket, and can be booked via the office in the grounds, the Sports Council or ActiveSG webpages.

On weekends, various associations use the fields to compete in baseball and other sports. It brings back memories of my Kampong Potong Pasir days, playing rounders and hantam bola (throwing the ball to hit each other), with my neighbours in our sandy yard. Playing games together does generate kampung spirit.

This is so much in keeping with Farrer Park's historical roots as a sports hub. In 1956, the Farrer Park Athletic Centre was opened. Facilities included a stadium with a seven-lane track, tennis courts and several playing fields that could be used for soccer, rugby and hockey.

A swimming pool was added to the centre in 1957. The pool is still standing and evokes a feeling of nostalgia in me, as it was the first public swimming pool I swam in as a student.

Today, it is used for training athletes. Swim champion Ang Peng Siong runs an eponymous swim school there. He first represented Singapore in swimming at the 1977 South-east Asia Games in Kuala Lumpur, where he won a silver medal.

I hope these fields will never be built on. I would consider it a travesty if that happened, since so much history is represented by these green spaces. In our bid to generate wealth by packing in more buildings, we have to be sensitive to what the place had meant to people and its heritage roots.

Today, multi-storey HDB blocks are all over Little India, Farrer Park and Pek Kio, among the heritage low-rise terrace shophouses and some private bungalows and condominiums.

I landed on my feet when I bought a resale HDB flat in the area. Having recently returned from a long stay in Britain, I am pleased to find familiar names in many of the road names which have been called after English counties, including Gloucester, Dorset, Kent and Cambridge; and including counties I had lived in - Hampshire, Surrey and Sussex. Someone said that the area used to be called Little England colloquially, which seemed an auspicious reason why I should end up here in my retirement years.

And what's more, this area takes me back to my kampung days when people were friendly and warm.

Here, I greet people in the lift, in the shops, wet market and hawker centre as I would have done in my village. Okay, some of them might look at me a bit suspiciously but more often than not, people return my greeting with a smile, or at least a nod. I had not thought that I would hear the rousing wake-up call of a rooster ever again when I returned to this city, but when the residents' committee (RC) volunteers acquired a chicken coop, hens and rooster for our community garden, I relive my kampung ambience.

Kampung spirit is definitely not lost in these parts. Residents get together at Pek Kio Community Centre for activities such as karaoke, archery and music.

At our Farrer Park enclave of HDB flats, we have our own RC premises where we play bingo or other board games regularly. There's a library and reading sessions for children, besides "Molly", the mobile library, turning up every month.

We have a playground for children, an outdoor gym for seniors and a badminton court for the more active. On Saturdays, several bird lovers with their myriad of colourful, talking parrots and parakeets bring them down to rest on specially created branches at the open-bird sanctuary for others to admire and listen to. 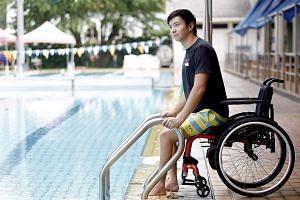 Green-fingered residents plant papaya, banana, lime, pandan and flowering shrubs in a spirit of togetherness in our community garden.

Living in the HDB heartland has an advantage of community like in a kampung. It is up to each of us to reach out to be friendly and to convey warmth.

When I moved in, my five neighbours were having their annual neighbours' get-together along our corridor and they invited me. On New Year's Eve, I returned the hospitality by ordering halal pizza and other foods for them. Being a senior on my own, it is so wonderful to have caring neighbours.

We are lucky to have Farrer Park MRT station, on the North East Line, right on our doorstep with linkways from almost every block section so that one need not get wet in the rain or walk in the hot sun. We even have our own school and neighbourhood police post, hotel and even a hospital.

The silver generation is well looked after, with a senior activity centre; and there are health screenings for us. Garden benches are located at various places for seniors to rest in between blocks. Our local MP does regular walkabouts and has breakfast with residents.

The People's Association has sent out officers to explain government policies and rulings and how we can get grants to help us make our lives more comfortable. I was offered a 90 per cent grant to fix non-slip flooring and put grab rails all over my flat.

Despite the many blocks of flats, this area is beautifully landscaped with magnificent raintrees, palm trees and shrubs to give it a rustic feel, though we are minutes away from the bustling metropolis. We are spoilt for choice for fresh produce in the wet markets at Tekka in Little India and Pek Kio market in Pek Kio.

As for food, we are in a food haven, with Indian food at Little India, a selection of Thai and Chinese, retro English, French and Italian bistros and, of course, Pek Kio food centre, where you can still have a meal for less than $5. You can get chye tow kueh for $1.50 and nasi lemak for $2.

It is good to be home.

•Josephine Chia is a Peranakan author who writes both fiction and non-fiction, and who is interested in preserving the past through literature.

A version of this article appeared in the print edition of The Straits Times on April 24, 2017, with the headline 'Kampung spirit that lives on in an HDB estate'. Subscribe
Topics:
More
Whatsapp Linkedin FB Messenger Telegram Reddit WeChat Pinterest Print Purchase Article Copy permalink