Developments in the Middle East have affected Islam in South-east Asia for centuries, and continue to do so today. The Jakarta blasts highlight the growing influence of the Islamic State in Iraq and Syria in this region, and portend more terrorist acts and acts of political violence.

Jakarta was rocked by two bomb explosions in its business and shopping district last Thursday, accompanied by an attack on a police post and a Starbucks cafe using improvised grenades and home-made handguns.

Four attackers and four civilians were killed, and more than 20 people injured. The Indonesian police as well as the propaganda machinery of the Islamic State in Iraq and Syria (ISIS) have claimed that followers of ISIS were responsible. Although the intention was to cause mass casualties like the Paris attacks in November last year, the lack of training and inadequate weapons resulted in minimal damage.

One significant lesson which could be drawn is the importance of developing societal resilience. Ordinary people as well as celebrities and politicians in Jakarta sharply criticised the attacks. Unlike in previous attacks from 2002 to 2009, I received a stream of messages on social media condemning the attacks, drawing attention to the incompetence of the perpetrators, forwarding jokes which undermined the intentions of the attackers and stressing their solidarity with the victims. If the intention was to cause ordinary people to cower in fear, the attackers failed.

ISIS claimed responsibility for the attacks. The Indonesian police chief said the attacks were planned by ISIS in Syria through Bahrun Naim, an Indonesian national. Bahrun is now in Syria but spent a year in jail in 2011 for illegal possession of weapons.

In follow-up raids, 12 people were detained in West Java, East Java and East Kalimantan. Weapons and ammunition were seized. Interrogation of the suspects is now taking place to ascertain if they are linked to the attacks in Jakarta.

For South-east Asians, the ISIS claims of responsibility are significant. A recent study by RSIS (the S. Rajaratnam School of International Studies) discussed the establishment of Khatibah Nusantara, a dedicated South-east Asia military unit within ISIS which uses Malay/Bahasa Indonesia as a language for communications and formed a separate fighting unit in Syria.

Khatibah Nusantara captured five Kurd-held territories in April last year. Led by an Emir, identified as Abu Ibrahim al-Indunisiy, the unit appears to be led mainly by Indonesians but Malaysian Malays are also active within the group. This development highlights ISIS' intention of building a regional network intended to support the establishment of a province (wilayah) of ISIS in South-east Asia.

The emergence of ISIS and its claims to have established a caliphate have therefore had an impact on South-east Asia. The threat will continue over the next decade. Hence, it is important to understand how ISIS rose to prominence.

The American anti-Baathist policy following the overthrow of Saddam Hussein in 2003 resulted in the removal of civil servants who had served Saddam's administration as well as the exclusion of military and intelligence officers from the new administration set up in Iraq. This decision is critical in understanding the effectiveness of ISIS in Iraq. Today, former military officers and bureaucrats from Saddam's Iraq are the core of ISIS in Iraq, which controls vast swathes of territory in northern and western Iraq.

In Syria, President Bashar al-Assad financed, armed and trained Al-Qaeda activists who crossed the border to attack the Americans from 2005 until the American withdrawal from Iraq. Growing numbers of Al-Qaeda supporters pledged allegiance to ISIS following the proclamation of a caliphate by Abu Bakr al-Baghdadi and the establishment of the Islamic State on Ramadan on June 29, 2014.

ISIS now controls significant territory in eastern Syria. American government officials claim that Mr Bashar's forces attacked moderate Muslim oppositionist forces and avoided confronting ISIS. The reality is that ISIS represents the alternative to Mr Bashar's cruel regime but his forces concentrate on the weaker of the forces opposing his regime. An escalating civil war among rival Islamic sects, the Sunnis and the Shi'ites, is taking place and no easy options exist.

One consequence of the failed Western policy in responding to the "Arab Spring" has been the emergence of unstable regimes throughout the Maghreb. With the overthrow of Libyan leader Muammar Gaddafi, who had been domesticated and no longer posed any threat, Libya has now emerged as an arms supermarket for the region and beyond. Besides North Africa, arms from Libya have flowed into the Sahel, increasing the threat from Boko Haram militants. 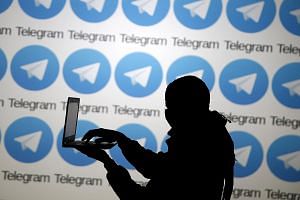 Telegram's secret chats and bots a boon for ISIS

Even if concerted action by Western powers and their allies results in the re-taking of ISIS-held territories in Iraq and Syria, the idea of the Islamic State has captured the imaginations of sympathisers seeking a return to an imagined pristine way of life in the seventh century. Libya could easily morph into the new centre for the caliphate.

Three conclusions may be drawn regarding the impact of these developments on South-east Asia.

First, trends in the Middle East have exerted a growing influence in recent years. Competition between an Al-Qaeda-offshoot, the Al-Nusra Front, and ISIS, has been replicated in the region. Singaporeans have joined the growing numbers of South-east Asians who have journeyed to Syria and Iraq to participate in the conflict. The claim of the ISIS-proclaimed caliphate to oversight over Muslims around the world has strong emotional appeal and resonates with many Muslims, even in South-east Asia.

While the number of such adherents is small, the willingness to engage in armed attacks and cause mayhem on the streets results in regional governments paying close attention to those influenced by the effective propaganda of ISIS spread on social media.

Although Shi'ite adherents in the region are minuscule, there will be pressure in the region for strong action against Shi'ite Muslims, reflecting the rising tensions between Sunni and Shi'ite in the Middle East.

Such demands will not necessarily be linked to support for ISIS. In Malaysia, Brunei and Indonesia, government-linked religious institutions have been active in taking action against Shi'ite followers.

While Muslims are a minority in Singapore, for ISIS, Singapore is seen as the heart of the archipelago. When the Al-Qaeda affiliated Jemaah Islamiah earlier developed a network to establish an Islamic state (Darul Islamiah Nusantara) linking Malaysia, Indonesia, southern Philippines and southern Thailand, it included Singapore as the Republic lies at the centre of the region. With the rise of the Islamic State, a more potent threat will exist in the decade ahead.

Second, it would be helpful to recognise that this is not a new threat. The challenge to Muslim religious leaders in the region arising from more radical versions of Islam emerging in response to conditions in the Middle East has been a recurrent theme in South-east Asian history.

In 1803, Wahhabi-inspired returned Minangkabau pilgrims from West Sumatra launched the padri revolts against the traditional elite (uleebalang) and Sufi-inspired leaders in the matriarchal society of West Sumatra.

They attempted to imitate the takeover of Mecca and Medina by an alliance of supporters of a reformist Salafi preacher Muhammad ibn Abd al-Wahhab and a local leader Muhammad bin Saud (who later formed the House of Saud in the future Kingdom of Saudi Arabia).

In the 19th and 20th centuries, modernist Muslim teachings were spread by books and periodicals published in Singapore by scholars who had returned from the Middle East who questioned the accommodation which had been made with the more traditional Sufi practices in the region as well as the incorporation of earlier Hindu and animist traditions in local practices. These scholars and religious teachers sought a purification of the religion and a return to the practices of Islam in the golden age of the seventh century.

Third, acts of terrorism and political violence in the region will occur. Governments are now more alert but it will be difficult to eliminate all threats by ISIS followers in the region operating as a clandestine movement.

While there has been a rise of "lone wolf" attacks in the West, attacks in the region have been by organised groups so far. Such attacks will not overthrow governments. If regular attacks occur, there will be a sense of insecurity and a threat to public order. Members of the public will have to get used to a larger police presence, precautionary measures such as the inconvenience of baggage checks and searches of vehicles and the closer monitoring of contacts with religious militants. The use of preventive detention will increase.

These developments will result in a significant increase in expenditure on internal security.

The risk is that governments in Muslim-majority states may adopt policies intended to win over those who view the religious agenda of ISIS positively, even if they disagree with its methods, resulting in increasing religious intolerance in the region.

•The writer is Distinguished Fellow, S. Rajaratnam School of International Studies, Nanyang Technological University. He was Singapore's Ambassador to Indonesia from 1986 to 1993