Question: When Singapore suddenly became independent in 1965, what did its leaders talk about incessantly?

All of the above?

Yes, but there was an underlying theme, a common thread binding them together.

You might not know it and it wasn't obvious at the time.

But looking back now, it is clear they were obsessed with the Singapore identity.

The founding leaders, especially Mr Lee Kuan Yew, talked non-stop about it - what sort of country it was and what it should become.

A Singapore that isn't clear or which does not have a national consensus on its identity will find it more difficult to overcome the challenges of a rapidly changing world. If we are not clear about who we are, how to decide what we want to do as a nation?

It dominated their speeches and shaped almost every aspect of Singapore's development, including the economy, defence, foreign relations and politics.

Then, when progress and development came and survival was no longer a pressing concern, they stopped talking about it.

And Singapore's identity became less clear, which is a problem.

But I am getting ahead of the story.

Why do I say identity was such a prominent subject in the early years?

You only have to read the speeches they made then.

"We made this country from nothing, from mudflats… But I say to you: Here we make the model multiracial society. This is not a country that belongs to any single community: It belongs to all of us… Over 100 years ago, this was a mudflat, swamp... Ten years from now, this will be a metropolis. Never fear!" 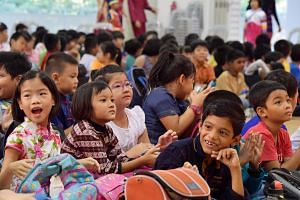 Another example: "Some people think that just because we are a small place, they can put the screws on us. It is not so easy... If they could have just squeezed us like an orange and squeezed the juice out, I think the juice would have been squeezed out of us... But it was a bit harder, wasn't it? It was more like the durian. You try and squeeze it, your hand gets hurt."

The Singapore identity they conceived was this: It was a newly independent country, vulnerable because it had no natural resources and was situated among hostile neighbours, with a multiracial people completely dependent on the outside world for a living. Even the water from its taps came from a foreign country. So it had to find a way of being open and relevant to the world, the people had to be exceptionally hard-working, organised and disciplined with a strong leadership. There was no other way. Work hard, stay united or perish.

Everything else flowed from this identity.

It wasn't just a matter of speech or an exercise in political imagination.

It shaped public policy in very concrete ways, in the way the economy was developed, in defence and security, foreign relations and politics.

Then, when Singapore became more developed and successful, the focus on identity disappeared.

Speeches by ministers and others today and for some time now are almost wholly focused on policies - what to do, and less about who we are or what we want to become as a people.

What has brought about this change?

Is identity no longer an important issue now that survival is not in question and Singapore has succeeded beyond many people's expectations?

Whatever the reason, I think the result is that Singaporeans are less clear about their identity as a nation.

Perhaps this is inevitable as Singapore society is no longer as homogeneous as it used to be, there are more interest groups, the class divide is growing and the Internet and social media have enabled people to assume multiple identities beyond the traditional categories of race, language and religion.

Globalisation, technological changes and immigration have accelerated these changes, especially in the last 15 years.

It is also more difficult today for the Government to prescribe a given identity and expect people to accept it willingly.

One example: Making Singapore into a global city comparable to London or New York with its lifestyle options attracting wealthy and highly skilled workers.

This might have been a possible vision for the city state to aspire to become given the many qualities Singapore possessed: a liveable city with a high level of public safety, respect for rule of law and excellent communication facilities.

But many Singaporeans would not have been able to identify with it and would feel out of place in it.

Indeed there was a political backlash when the number of foreigners working here increased rapidly as a result of the Government's overly liberal immigration policy in pursuit of that vision.

So, what is the identity Singaporeans would be comfortable with and which would define the Singapore they want now and in the future?

I believe the answer is less clear today than it was 52 years ago.

Experts who study the subject say identity is a difficult concept to grasp, that it is amorphous, fluid, changing, and always contested.

That was the view of many of them at a conference to discuss the issue which I attended last week.

People have multiple identities associated with their work, interests and social affiliations apart from their racial and religious identities.

But the experts also said a national identity can be empowering and inspirational, enabling a people to have a larger sense of purpose beyond their immediate concerns.

A Singapore that isn't clear or which does not have a national consensus on its identity will find it more difficult to overcome the challenges of a rapidly changing world.

If we are not clear about who we are, how to decide what we want to do as a nation?

This question is relevant in the economic sphere - about jobs and skills - as it is in politics - about the sort of society we want to aspire to become.

Identity isn't just a fuzzy notion to call up during feel-good moments.

It shapes policy and a country's approach to solving its problems, as it did in the early years of independence.

I hope there will be a deeper discussion on it, especially among younger Singaporeans, including on sensitive subjects such as race, language and culture.

Don't wait for another existential threat to the country to do it.

• The writer is also a senior fellow at the S. Rajaratnam School of International Studies, Nanyang Technological University