Given the ongoing tensions between the United States and China, it is a safe bet that the Shangri-La Dialogue (SLD) that kicks off this weekend will include another round of US-China barb-trading. But beyond the expected headlines this will generate, it is worth thinking about what rising US-China competition means for South-east Asia and how the region can navigate it.

South-east Asia is no stranger to managing changes in major power relations.

Asean was founded in the midst of the Cold War between the US and the Soviet Union. And South-east Asian states have had to recalibrate their own approaches amid changes in US-China relations, be it the full normalisation of ties in 1979 or in the aftermath of the Tiananmen Square massacre in 1989.

But fears about US-China competition have intensified over the past few years. The combination of China's growing assertiveness under President Xi Jinping and America's chequered reliability, heightened under President Donald Trump, have raised questions about whether both sides will be able to accommodate each other's interests and how this may affect the future evolution of the regional order.

Rising US-China competition is now showing signs of crystallising into confrontation. While this is by no means inevitable, efforts to manage aspects of relations, including the quest for a trade deal, obscure a broader reality where the outlines of wider, long-term US competition are being drawn out across a range of areas, including economics, security, technology and values.

Some of the dynamics of rising US-China competition will no doubt be on display at this year's SLD. Indeed, the fact that China's Defence Minister will be at the forum for the first time in nearly a decade, and that the US is expected to lay out specifics on the defence aspect of its Free and Open Indo-Pacific strategy, sets up the potential for US-China fireworks at a high level.

For South-east Asia, heightened US-China competition today is a worrying prospect for security, sovereignty and prosperity.

While competition between major powers is commonplace in international relations, if not properly managed, it can upset regional stability, force countries into false choices in their alignments, and result in unrealised cooperation and missed opportunities.

Additionally concerning is the reality that while South-east Asian states would ideally be able to exploit US-China competition for their own gain, a series of other challenges today may limit their ability to do so. Stresses in domestic politics, fraying Asean unity and uncertainty about the future direction of both China's assertiveness and US reliability are all complicating factors in this respect.

But that does not mean that managing heightening US-China competition in the coming years is beyond the ability of South-east Asian states. Indeed, there is still much that the region can do to both shape the nature of that competition in a more positive direction as well as better insulate itself from potential negative fallout.

On emerging areas of competition such as 5G, there is still little international understanding about how South-east Asian states are viewing this domain, with individual actions being viewed simplistically as leaning either towards or away from China, when, in many cases, options are still being weighed and the competitive environment is still being shaped. 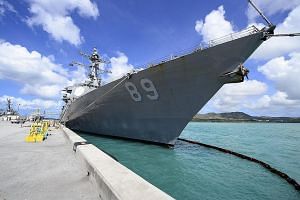 While countries such as Thailand and Singapore have been more outspoken about the criteria they are using to consider alternatives, greater clarity on the part of other South-east Asian states would help contribute to a better understanding of the broader regional environment beyond just the prism of US-China rivalry.

Second, South-east Asian countries should intensify efforts to engage other major powers beyond the US and China to work out more inclusive solutions to regional challenges. On issues such as infrastructure, engaging with actors such as Japan can help put the focus on addressing Asia's real development needs rather than US-China debates about aspects of Beijing's Belt and Road Initiative.

Third, regional states must be active in ensuring that South-east Asia remains central to ongoing conversations about shaping the future of the regional security architecture.

Recent efforts by countries such as Indonesia to distil a South-east Asian vision of the Indo-Pacific in response to Washington's articulation of its Free and Open Indo-Pacific strategy is a good example of this in practice.

Fourth, the region must reinforce regional and international rules and norms that can help manage US-China competition, even if Washington or Beijing is reluctant to do so. That includes strengthening Asean-centred institutions that are critical to the rules-based order as well as reiterating the importance of norms such as the freedom of navigation in the South China Sea.

Fifth, South-east Asian countries should accelerate efforts to integrate among themselves to mitigate divisions that may arise with rising US-China rivalry. Particular attention should be paid to developing links between the rest of South-east Asia and the Mekong subregion given the integration challenges therein, and this can be advanced under the Asean chairmanships of Thailand this year and Vietnam next year.

Sixth, South-east Asian states should better insulate their countries from the negative effects of major power penetration, which can range from rising US protectionism or Chinese influence operations. That involves not just reacting to individual developments but also cultivating alternatives, building resilience, raising awareness and planning ahead for contingencies.

To be sure, this is easier said than done. It will require South-east Asian states to operate beyond narrow self-interest, and to think comprehensively about the full range of tools available to them. But given both the importance of US-China relations to South-east Asia as well as the difficulty of managing competition between the two sides, such an immense effort is certainly warranted.

During his last keynote address at the SLD in 2015, Prime Minister Lee Hsien Loong usefully framed the challenge for South-east Asia when he said that while competition between major powers may be unavoidable, the question is what form this competition will take.

If they play their cards right, South-east Asian states need not consign themselves to the role of hapless bystanders or pawns. Collectively, they can try to shape the course of heightened US-China competition while better managing its effects.

• Dr Prashanth Parameswaran is a fellow with the Wilson Centre's Asia Programme and a senior editor at The Diplomat Magazine.

A version of this article appeared in the print edition of The Straits Times on May 31, 2019, with the headline 'How South-east Asia can navigate Sino-US competition'. Subscribe
Topics:
More
Whatsapp Linkedin FB Messenger Telegram Reddit WeChat Pinterest Print Purchase Article Copy permalink