How much are we aping a dress code which doesn't make sense in our hot climate? We deserve a bespoke version of appropriate dressing here. The recent pushback on a dress code suggestion for tertiary institutions is a lively way to continue such a conversation.

He's baking in the Singapore sunshine.

Sir Stamford Raffles wearing a tailcoat, stuffed shirt... I mean, ruffled shirt, and close-fitting trousers. In our sometimes horrid, often torrid weather, the statue of our nation's founder is practically glowing in the heat.

Soldered to his form are clothes more suited to his motherland, Britain, with her beautiful cold, cloudy skies.

He apparently had an opinion on appropriate outfits - at least of those worn by his second in command, Singapore's Resident William Farquhar - and at least one letter was sent about it.

Firing my perhaps overheated imagination, I wondered: What would Raffles have thought of the letter sent to The Straits Times about our tertiary students attending classes in shorts and slippers?

ST Forum writer Pavithran Vidyadharan caught some heat recently for saying that "attending lectures and tutorial classes wearing slippers, shorts and T-shirts… does not seem like an appropriate way to dress", and that "by implementing a dress code, we would be demonstrating to the world that we are a disciplined society".

That got a lot of people's knickers in a twist. 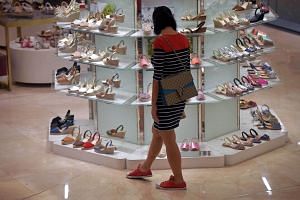 Why I am wearing old clothes this Chinese New Year

ST Facebook reader Harris Chai commented: "I'm sure the lecturers would rather have more engaged students who participate in class than well-dressed but boring, silent mug robots."

Others thought that dressing up is about respect.

ST Facebook reader Anjo Wong wrote: "The writer merely mentioned that shorts and slippers should be replaced with shoes and trousers to be more appropriate for lessons and give the lecturers a level of respect. Every place should have basic rules."

This other reader, however, had more specific requirements.

Mr Adam Kee said that long pants and covered shoes should be compulsory while attending lectures, and that jeans should be allowed, and "for girls, skirts from slightly above the knee to anything below should be ok".

Hide your thighs, girls. They will blind students and make them flunk out of school. Birds will fall out of the sky. The economy will have a meltdown.

Guys, we don't want to see any skin below the waist, or the planet will burst into flames.

So what would Raffles have thought of this kerfuffle over what to wear?

The Spectator noted in a recent write-up about a book on Farquhar that as he interacted with the locals almost to the point of assimilation, he "dispensed with his uniform in favour of looser garments".

"The growing distaste that Raffles felt towards Farquhar even extended to the Resident's appearance," said a piece about another book, Singapore: A Biography, by Mark Ravinder Frost and Yu-Mei Balasingamchow. "In March 1823, Raffles commented to Farquhar on his 'departure from the usual etiquette in dispensing with the Military Dress of his rank'. The next month, he told Farquhar that he had written to Calcutta on the matter and was awaiting the Company's judgment."

He claimed he was "required to wear his uniform when he acted in his capacity as military commandant. Presumably, he felt that when acting as Resident, he should be allowed to forgo clothes that made him uncomfortable in the local humidity".

If Raffles were our letter writer, would ST readers have insisted Farquhar should have sweated buckets for queen and country?

DRESS CODE FROM A COOLER CLIMATE

When it comes to the jacket, tie and trousers look, how much are we aping a dress code which makes sense in a colder climate, but not in ours?

Before you throw a shoe at me, let me say there are still settings where lots of people are uncomfortable with ultra-casual wear. Let's negotiate with one another on this.

Weddings, work, worshipping and wakes: Casual wear is okay if the people behind them give us the nod.

Also, if you're sporting the three-piece look because you think it's gorgeous, that's great.

I wear waistcoats and boots because I like how they look, and they keep me warm in frigid air-conditioned rooms.

Other times, I'm in our "national costume" of the T-shirt, shorts and slippers combo. If it's boiling hot, however, and you feel forced to sweat in a jacket, tie, starchy shirt and trousers due to Sir Someone From A Cold Country's idea of formality, it feels faintly ridiculous, and vaguely colonising.

Short-sleeved shirts not formal enough? According to whom?

According to people from a cooler climate, who associate seeing more skin, or looser clothing and lightweight fabrics with their summer holidays, with being off-duty?

Barring the odd cool spell, it's hot all year round here. We deserve a bespoke idea of what constitutes appropriate dressing here.

The recent pushback on the suggestion of dressing up for tertiary classes feels like we're continuing such a conversation.

It's not about banging on some ancient post-independence drum, chucking Western-style wear in favour of traditional national costumes. Hello, T-shirts are from the West. It's about evolving towards sensible warm-weather clothing choices.

Keep our minds and the doors to the national wardrobe open, and add diverse looks to what's considered apt for more formal settings.

With global warming hotting up, might fashion designers here blaze the way in warm-climate formal fashion for the rest of the world? Spring-summer and autumn-winter collections may give way to an eternal summer on runways.

DRESS SHORTS FROM A WARMER CLIMATE

Look, for example, at how Sir Other People From The Same Cold Country dealt with the semi-tropical climate of British colony Bermuda. Yes, Bermuda of the shorts.

According to a Conde Nast Traveler write-up, the men there - who could be heading into Parliament or on their way to the boardroom - wear shorts as part of formal outfits.

"Its origin dates back to the beginning of the 20th century, when British military officers stationed on the island found that wearing long trousers in the hot tropical climate was almost unbearable. They were given permission to snip their uniform pants off at the knee, and thus the Bermuda short was born."

Look at The Guardian reporting last year on the British Parliament, that "after some of the hottest June days on record - when even Ascot permitted men to remove their jackets during the royal race week - the Commons Speaker, John Bercow, who has until now been seen as a stickler for correct dress, has indicated to the Tory MP Peter Bone that the convention requiring male MPs to wear jackets and ties may be abandoned".

In Singapore, we have seen politicians without ties and jackets in Parliament.

Look at photos of Myanmar politicians in elegant traditional wear paired with slippers in Parliament, and meeting foreign dignitaries.

How about it? Shorts in Parliament? Wearing slippers to meet dignitaries? T-shirt, shorts and slippers combo a national costume?

(Ducking to avoid being hit by a formal shoe.)

How about first leaving our tertiary students to study in peace, wearing T-shirts, shorts and slippers in the cool, "bo chup" Singapore way.

A version of this article appeared in the print edition of The Sunday Times on February 18, 2018, with the headline 'How about T-shirt, shorts and slippers as national costume?'. Subscribe
Topics:
More
Whatsapp Linkedin FB Messenger Telegram Reddit WeChat Pinterest Print Purchase Article Copy permalink