The two leaders inaugurated an industrial area in Kendal, Central Java. Kendal industrial park is some 25km from Tanjung Emas Port in Semarang, the third largest deep sea port in Indonesia after Tanjung Priok (Jakarta) and Tanjung Perak (Surabaya). The new park is developed by a joint venture between Sembcorp Development and Indonesian developer PT Jababeka, and designed to be a manufacturing hub for garment, automotive parts, food and beverage, cosmetics, and so on. Kendal offers strategic location, cheap land, cheap labour and better infrastructure than in other parts of the country.

The location of the industrial park hints at a new direction for Singapore companies, which are venturing beyond the two most popular investment destinations of Jakarta and Batam. The latter seems to be losing its competitive edge in recent years due to protracted legal uncertainty caused by the Batam regional authority challenging the administrative authority of the Batam Development Authority. Meanwhile, Jakarta and its surrounding areas have seen significant minimum wage hikes which have reduced their attractiveness to labour-intensive industries.

Four memoranda of understanding were signed to enhance cooperation in the digital economy, hospitality and tourism, and a smart city development. Singapore firms have the competitive advantage in these areas and are well placed to help Indonesia develop. After two decades of close economic partnership, it is timely that the two leaders reviewed the progress of bilateral ties, identified potential challenges and explored ways to address them and further cooperation.

Given the rising global and regional uncertainty, the two leaders need to communicate so that their countries can work jointly to respond to regional and international developments more effectively. As such, it is important for the two countries to promote mutual cooperation, in particular to address issues that have caused recent tensions - for example, transboundary haze, airspace management and tax amnesty.

Clearly, Singapore-Indonesia economic ties have reached a level that is too significant to overlook. Bilateral trade grew significantly from US$10.4 billion in 2000 to US$41.5 billion (S$58.7 billion) last year. For years, Singapore has been Indonesia's top foreign investor. Last year, Singapore-realised investment reached US$5.9 billion or 20.2 per cent of total foreign direct investment (FDI) realisation in Indonesia. Likewise, Indonesia's outward direct investment to Singapore has increased from $638 million in 2010 to $2.4 billion in 2014. 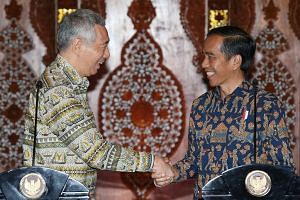 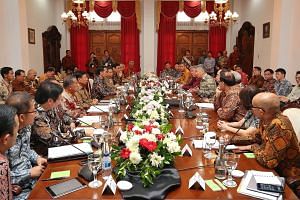 Even though economic ties between Singapore and Indonesia are expected to remain strong, challenges remain and a key one is the growing trade deficit on the Indonesian side. Its net trade balance has changed from a surplus of US$2.8 billion in 2000 to a deficit of US$8.5 billion in 2014. The turning point came after the 2008 global financial crisis. Most of the deficit comes from the oil sector as Indonesia imports most of its oil and fuel from Singapore.

One way to address this trade imbalance is by increasing investment from Singapore to Indonesia. However, that would first require Indonesia to improve its business climate. The World Bank's ease-of-doing-business report this year ranked Indonesia 91 out of 190 countries. The report puts Indonesia among the top five most improved nations, together with Brunei, Kazakhstan, Kenya, and Belarus, with regard to improvements in the ease of doing business.

However, on the ground, there remains much room for improvement. Businesses still struggle with illegal levies, cumbersome bureaucracy and regulatory overkill by regional governments. The government's effort to reform the bureaucracy remains a work in progress. There are manpower and infrastructure constraints that hurt the country's ability to use comprehensive IT systems to implement e-government. That is one area in which Indonesia can tap Singapore's experience and expertise to expedite licensing processes and streamline bureaucracy.

The hope is that yesterday's meeting between the two leaders will translate into real actions and enhanced cooperation that boosts future growth in both economies. Indonesia remains an attractive investment destination to Singapore due to its relatively high GDP growth of 5-6 per cent in the next few years, which in turn will grow the number of middle-income consumers who aspire to higher living standards. A second reason is Indonesia's efforts to attract more foreign investments by making it easier for investors to do so.

What Singapore offers Indonesia are expertise and financial resources to support both manufacturing and services through the use of modern technology. The hope is that Singapore's new venture in Central Java will pave the way for more such investments in other parts of Indonesia.