The outlook for Asean integration is mixed, with a slowing China and nationalistic instincts curbing prospects.

Some months ago, these pages were illumined by an interesting exchange between two distinguished Singapore diplomats over the future of the Asean project. Barry Desker, former head of the Trade Development Board and erstwhile envoy to Indonesia, argued that looking beyond 2015, the key concern was that Asean integration remains an illusion.

K. Kesavapany, former envoy to Malaysia and ex-chairman of the General Council of the World Trade Organisation, countered that, all things considered, Asean's integrative processes were working well.

Last month, when the Asean summit in Kuala Lumpur formally declared the establishment of the Asean Community at year's end, Mr Kesavapany would have had reason to feel vindicated. 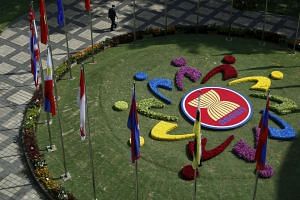 Asean Economic Community: Get the latest news and in-depth analyses

The idea of an Asean Community was agreed in 2003, at which point the thinking was that by 2020 this should rest on three pillars - an Asean Political-Security Committee, Asean Socio-Cultural Community, and the Asean Economic Community (AEC). Subsequently, Asean heads decided to move up the AEC to end-2015, with the less-developed Asean states given more time to fulfil their commitments.

Now that the hour is upon us, statistically at least, the AEC looks more or less "realised", going by Asean's data.

Of the 506 targeted measures to be achieved between 2008 and 2015, Asean states have implemented 92.7 per cent of the boxes that needed to be ticked for achieving a competitive region and a single market and production base. If an additional 105 measures, including deferred targets, are included, this would drop to a still-decent 80 per cent.

Jayant Menon, lead economist at the Asian Development Bank's Office for Regional Economic Integration, says the cocktail of multilateral and unilateral measures to reduce barriers has made Asean one of the most integrated regions in the world - a "shining example of how regional integration is fully compatible with globalisation".

So far, so good. Asean does have a good story to sell, even if many of its own citizens are not fully aware of it.

Having emerged relatively unscathed from the sub-prime crisis, the grouping, in 2013, passed China in attracting foreign direct investments. It is home to two of the last big frontier markets - Vietnam and Myanmar. Opportunities for foreign investors abound in more mature markets. Malaysia's Economic Transformation Programme, for instance, aims to elevate it to a rich nation by attracting more than US$440 billion (S$622 billion) in investments by 2020. Thailand's new seven-year investment promotion strategy tweaks its zone-based investment promotion strategy in favour of one that focuses on value-creation investments and R&D. For the astute entrepreneur and company head, there is potential for ample corporate reward.

Meanwhile, intra-Asean investments and trade are expanding healthily. More and more Asean firms are beginning to feature in the Forbes Global 2000 list. The region also has started producing its own transnational companies, with names such as Olam International and Air Asia. Thailand's CP Group is invested in all Asean nations except Brunei.

That said, most of the progress thus far has come from the easy pickings. Fuller integration is a mountain yet to be climbed. Of the 7.3 per cent of the measures due by 2015-end and not achieved, among the most difficult is the mobility of human capital, particularly the free movement of highly-skilled labourers, according to the ASEAN Integration Report 2015.

Likewise, many "sensitive" reforms, such as in agriculture and services, remain to be tackled. There is little standardisation of investment regulations and many industries continue to be protected. Two years ago, Singapore's DBS Group walked away from a plan to buy Indonesia's Danamon Bank after Jakarta stalled the bid, even though DBS was buying the stake from a Singaporean company. Other, less visible, barriers abound. Try getting a medical practitioner's licence in Thailand or Indonesia.

If all this were not enough, several pulls and pressures are looming that could test the Asean project severely. When the original Asean 5 nations were in their high-growth phase, external conditions were largely benign. The United States was the security guarantor and top market, regional disputes had not gained the salience they have today, and Japan and the US were the main providers of capital. China's rapid growth steadily opened up a lush new market, especially profiting commodity exporters.

Today, in addition to the pollution clouds Indonesia liberally exports to its helpless Asean neighbours in the dry months, the environment is more toxic generally.

China, Asia's No. 1 economy, has slowed. This is hurting several economies in the region, including Singapore. Some wonder if China may slow more and what effect this would have on the world. This week Fitch Ratings published a report that hypothetically examined the credit implications of a shock China slump to 2.3 per cent growth in the 2016-2018 period.

China has also set the stage for a yuan devaluation by benchmarking its money to a basket of foreign currencies, rather than the US dollar alone. Should its economy slow more, devaluation is a lever Beijing may feel compelled to pull.

Unlike a security crisis, which draws friends and foes together, making the concessions necessary for economic integration is easier in a rising tide than in a receding one. Already, it is instructive to see how Indonesia, Asean's biggest nation by territory and its No. 1 economy, has reacted. With all that heft, Indonesia ought to be Asean's natural leader. Yet, with its commodity exports in a funk and faced with mounting current account deficits, Jakarta has raised import tariffs on items such as cars, plastics and textiles. Apparently oblivious to the irony, shortly after he'd raised these duties President Joko Widodo demanded of visiting British Prime Minister David Cameron that the United Kingdom lower its tariffs on Indonesian goods.

Bernardo Villegas, a Filipino economist and trustee of the Makati Business Club, cites rising nationalism in key countries such as Indonesia as a threat to Asean integration. Some countries, he says, are taking two steps forward and one step back. It needs hardly any mentioning that his own country bans foreign ownership in key industries such as utilities, never mind the pain its citizens endure on that account. Just look at the power situation in Manila and how expensive broadband connectivity in the Philippines tends to be.

So, while Asean needs to watch out for a slowing China, it also must prepare for China's rebound, particularly through improving productivity. China's labour pool is not only not growing but it has also started to shrink, a reason it has allowed itself to become the top importer of automation equipment. Should the massive Chinese economy manage to continue growing at more than 5 per cent as its leaders project, it would mean an enormous leap in productivity that would hurt the competitiveness of many Asean economies, some of which have been compelled to raise minimum wages without improving the efficiency of labour.

All the big Asian markets - China, India and Indonesia - are also using their muscle to lengthen their supply chains at home. This is the essence of Prime Minister Narendra Modi's Make In India programme and a reason China is beginning to import less. This "onshoring" phenomenon will not only damp intra-regional trade but also has special impact on Asean because a grid system of manufacturing makes little sense if Indonesia's Mr Joko or the junta governing Thailand are reluctant to share their markets.

Besides, competition for the investment dollar is getting tougher. Amid a flight of capital from emerging markets, new magnets such as India are emerging. Foreign direct investment into India now outstrips the money going into China and even the US. The evolving geopolitics of the Indo-Pacific region is such that Japanese investor attention, for the conceivable future, will be substantially on India. To an extent, American investments too.

At the same time, China's surpluses which fund its geoeconomic initiatives could be hurt if Beijing has to spend billions on shoring up its stock markets and currency.

Meanwhile, many Asean states are not improving their chances of winning investments by being soft on religious extremism, ignoring widening racial divides and corruption, allowing perceptions of political risk to rise.

Beyond are other developments of relevance to the Asean project. Only four Asean states - Brunei, Malaysia, Singapore and Vietnam - are members of the Trans-Pacific Partnership (TPP). By current assessments, Vietnam is slated to be one of the big beneficiaries of the TPP. This week, at a conference organised by Vietnam's foreign ministry to promote awareness of the AEC, Ms Pham Chi Lan, a top Vietnamese trade economist, mused aloud on the competing merits of the AEC and TPP. "Which one is more beneficial for Vietnam? I think many people will choose TPP," said Ms Pham, a former secretary-general of the Vietnam Chamber of Commerce & Industry.

The coming months will tell us whether, in the scramble for investor attention, the need to put a floor under slumping growth and the pressure of electoral politics, Asean leaders will have the wisdom to take the broad view over the parochial.

For every centrifugal instinct in Asean that warms Mr Kesavapany's heart, there is a centripetal pull that plays towards Mr Desker's melancholic prognosis. It would be a pity if Mr Desker ended up wishing this was one assessment he had got wrong.