In just one year, spurred by a global pandemic, the world has undergone a dramatic change, marked by widespread and systematic changes to how we live and work.

However, as countries around the globe work towards bringing the virus under control, many are beginning to reimagine a future post the pandemic.

To better understand what this “post-pandemic” world will look like, especially in the context of the Asean region, one of the fastest evolving digital economies in the world, we surveyed 86,000 people from six Asean countries.

This Asean Digital Generation Report is the latest edition of a continuing collaboration between the World Economic Forum and Sea, a Singapore-based global consumer internet company, since 2017. In examining the group’s experience during the pandemic and future outlook, we found these five common trends that will be key to preparing the future for Asean.

A long road to the new world

Reaching the post-pandemic world will be no easy feat. Nearly 70 per cent of respondents expect the pandemic to last beyond 2021, with 39 per cent expecting it to last for 3 years or longer and 13 per cent believing the pandemic would never end. However, once it does, nearly two-thirds think that life will be significantly different compared to pre-pandemic times.

This is perhaps not surprising given the significant impact the pandemic has had on their lives. Some 60 per cent of people reported a decline in income and savings, with over 40 per cent saying it was a significant deterioration. Beyond its economic impact, many respondents, particularly women, reported declines in social, mental and physical health outcomes during the pandemic.

Despite these challenges, many respondents were able to deftly adapt to their changing circumstances, with 27 per cent of them having created new businesses during the pandemic. This trend was strongest among those in the wholesale and retail trade sector, with 50 per cent of them doing the same.

A future with better healthcare, a more caring society and greater technology adoption

The Asean digital generation’s hopes and fears clearly reflect the challenges they faced during the pandemic as discussed above.

The respondents foresaw a future with better health and hygiene, a more caring society and greater adoption of digital technologies, citing these as the most likely things to happen in a post-pandemic world. Notably, respondents ranked the possibility of a more caring society very highly, perhaps reflecting how different communities have bonded to support one another during these challenging times.

On the other hand, they were also particularly concerned about future economic crises, future pandemics and a rise of misinformation, citing them as their three biggest worries post the pandemic. 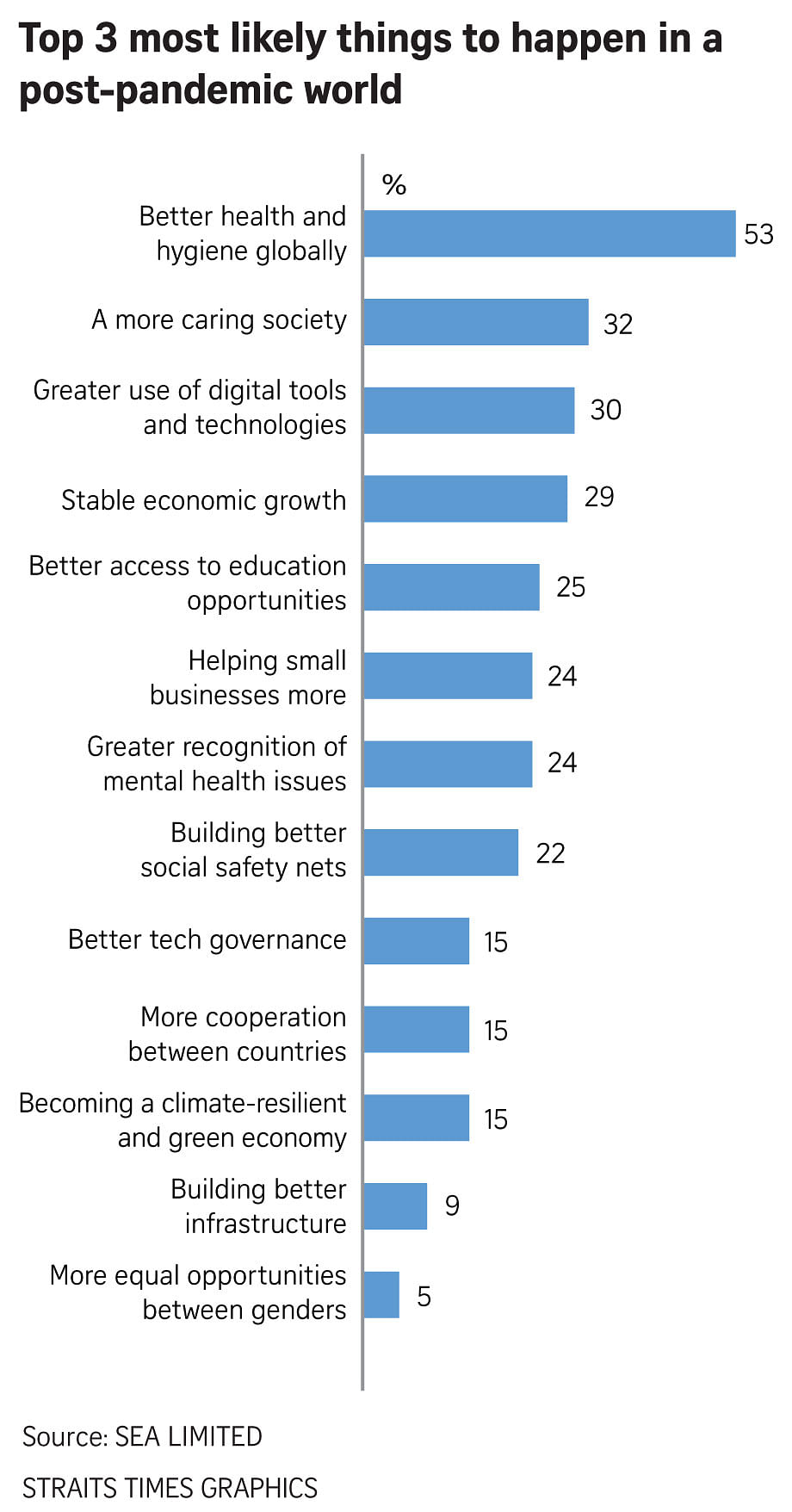 Digitalisation as a driver of economic recovery

One consistent finding throughout the survey was how the respondents believe technology will play a vital role in supporting their own livelihoods as well as the economy at large. This is particularly true for those that were harder hit by the pandemic.

For example, 85 per cent of respondents, especially women and owners of MSMEs, consider digitalisation as important to economic recovery.

We also asked respondents about their current and intended future use of digital tools across the different aspects of their lives (e.g., in their work, study, finance and personal lives). We found that, on average, around 43 to 66 per cent of respondents wanted to digitalise their lives more. For MSME owners, the desire was even greater at 51 to 76 per cent.

Interestingly, we also found evidence that digitalisation benefits from the “flywheel effect”, whereby the more digitalised you are, the more likely you are to desire further digitalisation.

Notably, 70 to 86 per cent of respondents, who are already active digital users, would like to increase their level of digitalisation. This is a stark difference compared to the 15 to 32 per cent of those who were less active users.

A potential explanation for this is that as people use digital tools more, their benefits become more apparent, which then incentivises them to use them more.

Conversely, those who do not partake in digital tools have less exposure to their benefits and are thus less incentivised to increase adoption.

The need to tackle barriers to digital adoption

To identify these barriers we asked respondents about the factors preventing them from digitalising further and what can be done to best promote digitalisation in the economy.

In both cases, over half of the respondents cited access to affordable and quality internet as their top constraint. The issue of internet access is also a consistent theme seen in most countries, not only at the regional level.

Another key barrier identified was their level of digital skills, including a lack of confidence and understanding of where to use them. This barrier is particularly acute for the relatively less active digital users, who are still in the initial phases of technology adoption and thus have yet to understand its benefits.

For more active users, concerns shift away from digital skills and towards trust and security.

Given the cross-cutting nature of these barriers, tackling them would require a multi-stakeholder approach at both country and regional level to ensure better coordination among governments, private sector players as well as civil societies.

We asked Asean’s digital generation what they think the three most important skills will be for the post-pandemic world. While the ability to use technology topped the charts, it was closely followed behind by soft skills, such as creativity & innovation, self-discipline and resilience & adaptability.

During the pandemic, significant digital skill transfers occurred.  Furthermore, these transfers were intergenerational, as youths (aged 16-35) were more likely to be “teachers”, while those older tended to be “learners”.

Perhaps, there could be more programs to further support these types of skills transfers between the digital natives and those less digitally adept within communities.

The survey also found that, in general, the digital generations are not very confident in the skills they deem as important for the future. For example, while 38 per cent of respondents thought creativity and innovation as an important skill, only 26 per cent considered themselves proficient.

This highlights the urgent need for further upskilling and reskilling initiatives to ensure that this digital generation is equipped for a post-pandemic world and beyond.