The dead are on the move.

Half-empty rows of niches grin like skulls with teeth, broken and missing.

Families had the ceramic-like niche covers smashed, so workers can pluck out urns. These are moved to the next resting place.

I am standing looking at the cavities in the walls of the Mount Vernon Columbarium pagoda. I am on a floor high enough to be near the crown of a beautiful tree by the building. The tree and I are wreathed in smoke floating from burnt paper offerings by its roots.

As announced by the Housing Board in 2013, the columbarium will be cleared to make way for the development of the Bidadari estate.

My father's niche and those of others, and the pits for burning offerings, will make way for flats, playgrounds and pits for barbecuing chicken wings.

Waiting for years since and worried that it could be the last I saw of it, I hurriedly doodled the pagoda framed by trees during Qing Ming Festival last year. Ants crawled up my legs as I ate up the verdant sight - perhaps they were wondering if I was a strange little tree or a fresh offering like the roast meat and rice in front of the niches.

However, as another tomb-sweeping festival and another death anniversary came and went this year, I hovered on the edge of uncertainty.

According to The Sunday Times, the Government's 325,000 niches are about half-filled, and private columbarium operators say there are enough niches for three to four decades. But that is just uncertainty postponed. My family has been thinking about scattering his ashes at sea. A home under the waves would be the end of moving the remains again in some years.

In Singapore, death is forever but you cannot say the same for the dead resting in one place as the living claim space for condos and air bases.

Exhumations done en masse are common here as they are part of a policy that requires those who have been buried for 15 years to make way for new interments.

Over the years, the Bukit Brown Cemetery exhumations done for a new road have been hotly debated.

More recently, The Sunday Times reported that some 80,500 Muslim and Chinese graves in Choa Chu Kang Cemetery will make way for the expansion of Tengah Air Base, as announced by the authorities last month. This, in turn, is to accommodate the relocation of Paya Lebar Air Base from 2030. 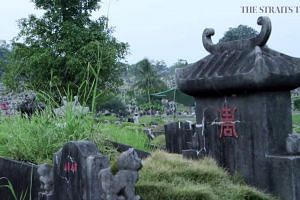 Bittersweet day as bones, and memories, are dug up at Choa Chu Kang Cemetery

The news has left youth development officer Shah Reza, whose grandfather's remains have to be moved, wondering in The Sunday Times report: "Will we have to bury our loved ones on islands some day?"

We want some precious things to remain untouched, to be a question answered, a case rested.

This uncertainty hung in the air like smoke when I grabbed a cab one day to get to Mount Vernon. The driver chattily exclaimed, his family, ah, had to move his uncle's ashes too. But, wah, his daughter scored a flat at the Bidadari estate - in high demand among house-hunters.

In May this year, The Straits Times reported that more than 1,700 applicants were vying for over 370 five-room flats in Bidadari's Woodleigh Hillside - nearly five buyers for each unit - then. ERA Realty key executive Eugene Lim said: "The demand is expected because Bidadari is often touted as the next Bishan."

The next Bishan - where Chinese burial grounds made way for an in-demand HDB estate in the 1980s.

The next Tiong Bahru ("new cemetery" in a mix of Hokkien and Malay) - where graves made way for Singapore Improvement Trust housing projects in the 1920s and 1930s. It is now an old-school cool place for chwee kueh, culture and coffee.

I saw a place for the dead coming to life in the eyes of the taxi driver, in his uninhibited joy over his child clinching a flat there. Wah, it's like striking lottery, you know. Wah, very expensive, but hard to get, you know.

I was actually feeling grim as the cab ride was from a funeral to the columbarium for my father's death anniversary rites. But I started to "wah" and "ah" because the cabby's happiness was infectious.

A home for his daughter to have children of her own perhaps, the extended family gathering around a barbecue pit - a place for the living.

One last "wah", and I arrived at Mount Vernon. Looking at the tree which stood by my father's niche for decades, I thought that it would be calming to scatter his ashes at the foot of it, but the sea it may have to be.

For those not bound by religious and traditional rituals, perhaps we can find meaning by exploring less usual ones.

Years ago, I read about egg-shaped caskets that biodegrade once they're buried, and the ashes or bodies will provide nutrients to trees planted above them.

Italian designers Raoul Bretzel and Anna Citelli call it Capsula Mundi ("world's capsule" in Latin), and their website says that the trees, chosen in life by the deceased, serve as "a memorial for the departed, and as a legacy for posterity and the future of our planet". "Family and friends will continue to care for the tree as it grows. Cemeteries will acquire a new look and, instead of the cold, grey landscape we see today, they will grow into vibrant woodlands."

CNN said in a report in May this year that the designers were launching the first version of their product, which is only for ashes.

I like the fantasy of becoming a part of a tree.

Feed my remains to trees, so I can remain in one place, and one day have nothing left to move.

Even if the authorities later want to plant apartments where my tree would be, that's okay.

Grow something good from my cuttings and seeds. Turn my tree into useful things like food or floorboards, but maybe not a coffin, please.

"A lot of energy goes into producing these materials (the wood, synthetic cushioning and metals of traditional coffins), which are used for a very short time and then buried. They're not going to break down very fast," University of Tennessee associate professor of biosystems engineering and soil science Jennifer DeBruyen told CNN.

Her thoughts on cremation? "It's a very energy-demanding process."

I'll tell you what's an energy-demanding process: Uncertainty about what to do next for the dead.

For now, until the thought of rows of trees replacing rows of niches and tombstones grows real, I have a fantasy of the pagoda tree staying even as condos sprout in the area.

A green, living memorial for the remaining remains and the departing departed.

A version of this article appeared in the print edition of The Sunday Times on August 06, 2017, with the headline 'Feed my remains to trees, stop moving me around when I'm dead '. Subscribe
Topics:
More
Whatsapp Linkedin FB Messenger Telegram Reddit WeChat Pinterest Print Purchase Article Copy permalink