The current dengue outbreak comes on the back of a rising Aedes mosquito population and lower immunity among people. But the chances of getting dengue today, compared with the 1960s or 1970s, are much lower.

Q What causes dengue outbreaks to rise or fall?

A Dengue was first reported in Singapore in 1901, and it became a major public health issue in the 1960s and 1970s, claiming children as its main victims. Dengue is transmitted through interactions between humans, vector mosquitoes and dengue viruses. The rise and fall of dengue is thus driven by many factors that influence the probability of contact between a mosquito vector and an infected or susceptible person. Thus, an outbreak can be driven by a decrease in the immunity of the human population, an increase in the mosquito vector population and/or an increase in the epidemic potential of the virus.

There are four serotypes of the dengue virus, and outbreaks in the previous 15 years have been associated with a switch in the predominant circulating virus serotype.

This happened in the outbreaks in 2005, 2007 and 2013. As infection with one serotype confers immunity to only that specific serotype, a victim of the disease remains susceptible to the other three serotypes. An outbreak involving one serotype would thus result in a significant proportion of people becoming immune, lowering the rate of transmission in the community until a new serotype emerges.

Q What is the cause of the current outbreak?

A There is currently no evidence of a switch in serotype, and the main virus circulating in Singapore is a strain of dengue serotype 2 that has been dominant since 2016. But the population in the community of the main vector of dengue - the Aedes aegypti mosquito - has increased by almost three times since the last major outbreak in 2013.

The very warm weather in the past few months has further helped both the mosquitoes and the virus inside them to multiply faster, increasing the chance of virus spread. 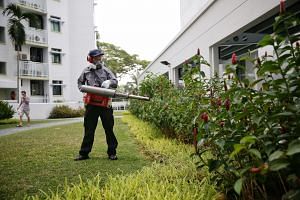 Over 9,000 dengue cases reported so far this year

This is against a backdrop of declining dengue immunity among the resident population.

Together, the three factors - high vector population, high temperature and low immunity in the human population - are the most likely contributors to the ongoing dengue outbreak.

More areas of Singapore, including areas with no outbreaks, have large populations of the Aedes aegypti mosquito. With the ambient temperature expected to remain high for weeks to come, dengue transmission will continue unless every individual takes action to remove all stagnant water to deprive the Aedes mosquito of its breeding habitats.

Q Has the dengue situation worsened in Singapore in the past decades?

A Dengue was first brought well under control in the late 1970s. Though it appears that dengue transmission has intensified in the past two decades, the same study mentioned above estimated that Singapore residents are six times less likely to get a first dengue infection today compared with in the 1970s, and 10 times less likely than in the 1960s.

As a result, just about 16 per cent of youth (aged 16 to 20) in Singapore have had dengue before, a relatively low level when compared with other tropical endemic cities (50 per cent to 98 per cent among 20-year-olds).

The study also estimated that from 2005 to 2009, only one in 14 infections was notified, compared with one in six infections from 2014 to 2017. Together, these suggest that the general increase in the number of people diagnosed with dengue in the past two decades is most likely due to an improving healthcare system, equipped with better and cost-effective diagnostic tools.

Q Will dengue worsen in the future?

A Singapore is not alone in its fight against dengue. As reported by the World Health Organisation (WHO), our neighbouring countries, such as Cambodia, Malaysia, the Philippines and Vietnam, are also facing the challenge of dengue outbreaks this year, with more than 500 deaths reported in the region as of the middle of last month.

Today, more than half of the global population reside in cities. The main vector of dengue, the Aedes aegypti mosquito, thrives in urban settings, exploiting the extensive network of man-made infrastructure. It breeds in artificial containers and dwells mainly indoors, sheltered by the roofs and walls of cities. In addition, climate change will expand the geographical territory of the mosquito vectors, viruses and epidemics.

In Singapore, the challenge will be further intensified by the low prevalence of protective antibodies in the population. Many from Generation X (born between the 1960s and the early 1980s), who have benefited from the successful vector control regime, will soon become older adults with no or single exposure to dengue.

A large group of people will thus be at risk of acquiring their first and second dengue infections at an age when they may already be afflicted with underlying chronic diseases.

Being infected by dengue for the first or second time is often more symptomatic than the third or fourth time, and studies conducted by Tan Tock Seng Hospital and elsewhere have shown that some underlying diseases, such as diabetes, could further complicate the outcome of infections.

Q What are we doing about it?

A The most effective solution is to keep the population of Aedes mosquitoes low as part of our efforts to build a resilient city.

Singapore's dengue control programme, which is aligned with the WHO's Integrated Vector Management strategy, has evolved in the past decade.

In addition, risk-based pre-emptive search-and-destroy operations and heightened preparedness for outbreaks have been undertaken by the NEA, thanks to the set-up of an Aedes surveillance system using Gravitraps, virus surveillance via advanced molecular tools, and the use of big data to help identify high-risk periods and areas.

The Inter-Agency Dengue Task Force, set up in 2005, has strengthened efforts among stakeholders.

The programme is also well supported by the grassroots networks and dengue prevention volunteers, who have reached out to residents to remind all to do the five-step Mozzie Wipeout.

The results are promising. The continual release of male Wolbachia-Aedes aegypti mosquitoes has resulted in up to a 90 per cent suppression of the urban Aedes aegypti population at the study sites in Yishun and Tampines, which have expanded almost four times in size since the first phase of Project Wolbachia Singapore started in 2016. EHI is currently developing strategies and automation to scale up mosquito production and releases, to enable larger-scale deployment. This will take some time.

Q How important is the role of the community?

A Although the above efforts have been effective in moderating the magnitude of dengue outbreaks, dengue control will continue to be dependent on the efforts of the whole community. Dengue prevention could be hindered by a lack of awareness of potential and actual mosquito-breeding habitats, or infrastructure that is inadequately maintained, resulting in hidden "containers" with water, accessible to Aedes mosquitoes, but not to us.

It is like a chain of links, which is only as strong as its weakest link. A single mosquito-breeding habitat in a home can compromise the health of multiple people in the neighbourhood. A disposable cup littered along a walkway, as harmless as it may seem, can pose the same danger.

Fundamentally, keeping out Aedes mosquitoes relies on good environmental management through refraining from littering and practising good housekeeping and maintenance habits, and the role of every individual and organisation cannot be overemphasised.

• Associate Professor Ng Lee Ching is director of the Environmental Health Institute of the National Environment Agency. She is also an adjunct associate professor at the School of Biological Sciences, Nanyang Technological University.