Hold her hand in public, knowing
that your bodies will always belong

to a stranger's potential violence. Be cast
from your home, her deathbed, your place

of worship. Bow to values you're told
make your country possible. Work

towards a slice of survival that defies
who you are: cancer, sin, a disease

invisible. Get featured in the national
press, but only if you cut yourself

into pieces, your lived experience into trite
verse: no one here reads poetry anyway. Tania De Rozario is a visual artist and writer engaged with issues of gender, sexuality, loss, longing, and representations of women in Horror.

Her work won the 2011 Golden Point Award for Poetry, was shortlisted for the 2014 Singapore Literature Prize, and has been showcased in London, Spain, Amsterdam, Singapore, New York, India and San Francisco.

She is an associate artist of The Substation, and runs EtiquetteSG, a multidisciplinary collective that develops and showcases art, writing, film and music made by women. 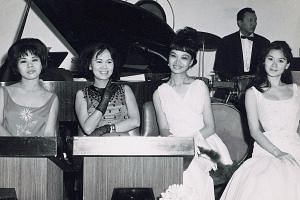 The 'lancing' girls from a glitzy world

Tender Delirium (Math Paper Press, 2013) Her first collection of poetry and short prose comprising selected works written over the course of a decade.

This anthology was co-produced by EtiquetteSG, a multidisciplinary collective run by her.

• The poem in the Rhyme And Reason series is brought to you in partnership with the National Arts Council.