Sometimes, a part of your life must end fully before the next one begins.

In the middle of 2013, Mr Amardeep Singh, regional head of pricing and risk management for Asia-Pacific and Australia for the American Express card division was one exhausted man. The 25-year Amex veteran's career was just peaking but the previous years had been extremely harrowing, thanks to being one of the key staff identified to give depositions before the US Justice Department (DOJ), which was investigating credit card companies to see if they had been artificially pushing up prices.

Tasked with defending his department, Mr Singh was aware that any slip on his part could result in a US$4 billion loss for his firm. The US depositions began just when he had relaxed a bit after a hectic time juggling the responsibilities that followed a significant promotion, a new superior and an intensive executive MBA programme with the Chicago-Booth School of Business that Amex had sponsored him for.

In the event Amex was let off by the DOJ without penalty. Mr Singh was savouring the moment when a new problem arose, this time in Australia. The central bank there announced a regulatory review, to take place in 2013, and it was clear that to present a convincing case, Mr Singh and his department would have to be based there.

Unwilling to leave Singapore, where he has been a naturalised citizen for over a decade, Mr Singh told the firm that while he would transfer his knowledge to the other staff, he would prefer a payout and leave the firm to stay in Singapore.

"I took my golden handshake from American Express and it was a decent one," the 51-year-old turbaned Sikh told me recently. "My career had been extremely satisfying but there is only so much you can do. I wanted to rest for a few months and get my health back. My blood pressure was up, and the stress had aggravated my skin problems."

As he regained his health, Mr Singh, a trained engineer, began dabbling in spirituality and musicology, reading Hindu and Sikh scriptures. He was already an accomplished photographer, contributing to Asian Geographic and other titles.

Then came the epiphany.

His late father had moved from Muzaffarabad in Kashmir to Gorakhpur, an Indian town bordering Nepal, just before the bloody Partition of India in 1947 that saw the birth of Pakistan as a nation for the subcontinent's Muslims. Mr Singh's mother, who died when he was just a boy, was from Abbotabad, a garrison town in Pakistan. 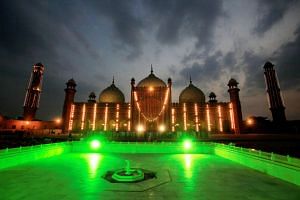 The pain of separation: Recalling India and Pakistan's birth traumas

In that cataclysmic event which saw the slaughter of hundreds of thousands as Sikhs and Hindus moved East to India while Muslims moved West to the new country of Pakistan, several of his relatives had perished. His own mother-in-law had lost both her parents in the killings. His reading of history had told him how the Sikh empire had at the height of its glory extended from Punjab all the way to the Khyber Pass and Kashmir, even mounting a failed expedition to Tibet.

Now, much of the Punjab had become Pakistan territory, emptied of Sikhs and Hindus, with the eastern part in India, with nary a Muslim in sight. In the new India, few had any real idea of the feats of their ancestors, or how large their footprints had been.

Mr Singh decided he would travel to Pakistan to visit some of those spots, including his parents' birthplaces. He says he had no hesitation travelling to a land that many Indians, and those born in India, consider hostile. Educated at the elite Doon School, he had from young been encouraged to take week-long treks in the mountains and valleys of the lower Himalayas. Neither travel, nor hardship, were unfamiliar to him.

That first visit to Pakistan in 2014 would be followed by a longer, second one last year and lead to two spectacular pictorial books on the forgotten Sikh spiritual and cultural heritage. Indeed, Mr Singh is spending most of this month travelling around the world to speak on his quest and its fruits, appearing at literary events and others organised by the Sikh diaspora that stretches from Australia to Canada.

"I didn't go to Pakistan to make a book, I was merely making a journey," says Mr Singh. "Looking back, I think I was being prepared for this all along... the 19th century accounts of British travellers that I had consumed so avidly, my delving into spirituality, and the photography lessons I took."

Given the fraught bilateral ties between Pakistan and India, tourist visas are difficult to obtain for Indians seeking to visit Pakistan, but he had Singapore papers now, which helped somewhat. Granted permission to visit, he looked down at his red passport to see the visa stamped was valid only for a 10-day stay. Something in the visa officer's Punjabi dialect suggested he just might be from Abbotabad, his mother's birthplace. Using that tenuous connection to his advantage, Mr Singh pleaded for, and secured, a 30-day entry.

"I landed in Lahore and the journey just took off. I visited 36 cities and villages in 30 days," he recalls. "I didn't know where I was staying next. Sometimes, I used Sikh gurdwaras as a hub. Other than my flight cost, it didn't cost me more than $2,000. People embraced me. Except for car hires, and gifts, I wasn't allowed to spend anywhere. It was the cheapest trip of my life."

The first book, Lost Heritage: The Sikh Legacy In Pakistan, was a result of that 30-day visit. For the inexperienced Mr Singh, getting the heavy volume published was no easy task. Funding it alone was out of the question and he would have to get it printed, and posted from India, to save on costs.

Fortunately for him, Mr Harjit Bhatia of Asia Growth Capital Advisors in Singapore spotted the value of his work, guaranteeing purchase of 1,000 books. In a fortnight, Mr Bhatia had rounded up several more of his friends and associates to support the work.

Today, Lost Heritage, with a maximum retail price of US$95 (S$126), has sold more than 6,000 copies and is in its fourth print run. Between January and June 2016, says Mr Singh, he spoke about the book at 74 events around the world.

Mr Singh briefly sought to go back to corporate life, joining Singapore start-up SingX, promoted by a former Amex colleague with dreams of creating the "Airbnb of money transfers".

It would not last. In December 2016, he was invited by the Pakistan Academy of Letters to speak at its literary festival and Mr Singh put in a request for an extended stay, this time for two months. His intention was to visit areas he had not hitherto explored, such as Balochistan, and do more detailed studies in the Punjab itself. Many of the places he wanted to visit were historic forts that were now military encampments.

Again, luck played a hand: A senior military figure who had been earlier posted to Australia as defence attache had heard him speak there and been moved by his passion for his work. Using that link, Mr Singh tracked him to his current posting in Sialkot, Pakistan.

In Pakistan, the army calls the shots. The wheels of bureaucracy turned. When the literary festival ended, he was told he'd henceforth be a state guest. A few days later, he got the necessary permissions. Every day, two Land Rovers with military escorts would show up at his door to take him wherever he wanted. In one historic place, now used as an interrogation centre by the Special Branch, the armymen got into a flaming row with the guards blocking their entry. Mr Singh was eventually allowed inside. Another spot he got to visit was close to the super-secret atomic facilities at Kahuta. In Skardu, Baltistan, locals told him he was the first Sikh to visit the area since the 1947 Partition.

"My army security was now getting engaged and equally enthusiastic about my quest. They were learning things about their own country that their textbooks did not tell them," says Mr Singh.

He was himself surprised to find four million "Nanakpanthis" - people who follow founding Sikh guru Nanak but without the trademark turban and long hair - mostly around Sindh province, in a syncretic way of life that embraces traces of the Hindu pantheon as well. In the old Punjab, many gurdwaras even had Muslim singers.

"The Nanakpanthis worship in gurdwaras. They are better Sikhs than most of us," he says. "Sikhism was an all-inclusive, reformist movement. Today, Sikhs had forgotten how their forefathers thought and lived. Those clues lie in Pakistan, in the remnants and the relics. They don't live in the marble and gold that are the hallmark of our gurdwaras around the world."

Now that his quest is complete, will he return to corporate life once the whirlwind book tours are done? Unlikely, says Mr Singh, although financially it would merit consideration. The man who once travelled business class now looks for the cheapest fares and his whole family has adopted a frugal lifestyle. Whatever he does next, he says, will be in the creative space.

"Life is to be lived once and I want to live it on my terms," Mr Singh told me. "No one will know me for what I did at Amex for 25 years. But what I have done with these books will live for generations. I know I have left something behind."

• The Quest Continues: Lost Heritage - The Sikh Legacy In Pakistan will be launched in Singapore at 5pm on Jan 27, at the National University of Singapore Society Kent Ridge Guild House.

A version of this article appeared in the print edition of The Sunday Times on January 07, 2018, with the headline 'Ex-Amex exec Singh is on a heritage trail'. Subscribe
Topics:
More
Whatsapp Linkedin FB Messenger Telegram Reddit WeChat Pinterest Print Purchase Article Copy permalink