WASHINGTON • In the early days of his presidential campaign last year - at a time when no one gave Mr Bernie Sanders even the glimmer of a chance of mounting a challenge - the Vermont senator actually praised his rival, former secretary of state Hillary Clinton.

"I've known Hillary Clinton for 25 years. Maybe I shouldn't say this. I like Hillary Clinton. I respect Hillary Clinton," he said to CNN, in the sort of folksy frank nature that was supposed to be the trademark of his campaign.

Fast-forward to today and it's clear whatever warm feelings he may once have had for his rival have all but evaporated. 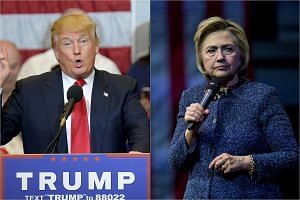 In the lead-up to this week's high-stakes primary in New York, there have been allegations of fraud, name-calling, protests and a televised debate filled with both candidates yelling over each other.

The fighting may not be anywhere near the chaos over at the Republican Party - so far no attacks on the attractiveness of spouses or size of genitalia - but there is enough animosity to suggest that the Democratic Party is not about to get the smooth nominating process it expects. And that may well make the general election more competitive.

On the Clinton side, two controversial moments stand out. The first came after Mr Sanders gave an interview to the tabloid New York Daily News where he failed to back up many of his big ideas with policy specifics. The Clinton campaign took the transcript, sent it lock, stock and barrel to supporters in an e-mail arguing that the senator lacked substance.

Then last week, former president Bill Clinton appeared to mock Sanders supporters in an interview with NBC, again insinuating a lack of substance.

"I think it's fine that all these young students have been so enthusiastic for her opponent and (he) sounds so good: 'Just shoot every third person on Wall Street and everything will be fine'," he said.

Though he stressed it was a joke, Mr Sanders and his supporters took umbrage and criticised the former president for disparaging, instead of encouraging, young voters.

That's not to suggest behaviour on the Sanders campaign was any better.

In fact, some observers argue that it was Mr Sanders who took the simmering tensions to another level when he said that Mrs Clinton was not qualified to be president because of her initial support for the war in Iraq and the donations she receives from Wall Street. It was the first proper personal attack of the campaign, even if it might have started based on a misunderstanding.

Mr Sanders launched the attack against Mrs Clinton because he thought she had similarly said he was unqualified. That subsequently turned out not to be true, but the senator only sort of walked back his comments.

From that point on, Mr Sanders and his supporters appeared to double down on the characterisation of Mrs Clinton as a corrupt politician.

When he delivered the line - a statement about how universal healthcare "will never happen if we continue to elect corporate Democratic whores" - the enthusiastic crowd erupted in cheers.

Many Clinton supporters took umbrage at a remark they saw as a thinly veiled offensive slur directed at the former secretary of state.

Over the weekend came a worse indignity for Mrs Clinton. As her motorcade headed towards a fund-raiser in California with actor George Clooney, Mr Sanders' supporters lined one section of the road and threw dollar bills at her car as she passed.

Then on Monday, the Sanders campaign sent out a letter accusing Mrs Clinton of breaking campaign finance laws, which prompted another exchange of angry e-mail between campaigns.

To be clear, none of this back and forth is appearing to have an effect on the general direction of the race. Mrs Clinton remains the heavy favourite to win the nomination and after her dominant victory in her home state of New York on Tuesday, it now looks impossible for Mr Sanders to overhaul her delegate lead.

Yet, the senator can still cause some real damage to Mrs Clinton and the Democratic Party's hopes at large if this angry bickering continues.

Polls show that the #BernieorBust movement - the group of Sanders supporters who say they won't vote for Mrs Clinton if she is the eventual nominee - is sizeable.

A McClatchy-Marist poll released last week found that 25 per cent of Sanders supporters would not support Mrs Clinton if she became the Democratic Party nominee. In contrast, only 14 per cent of her voters said they could not get behind the Vermont senator.

A Pew Research poll released a week earlier was even more alarming. While that survey agreed with the McClatchy-Marist poll on the proportion of Clinton supporters that would reject Mr Sanders, it found that 46 per cent of his supporters wouldn't vote for Mrs Clinton.

More alarming still for the party is the notion that Mr Sanders also seems to be poisoning the well for Mrs Clinton among independent voters.

According to The Wall Street Journal, 35 per cent of independent voters had a positive view of the former first lady, while 54 per cent had a negative view. This week, those numbers are 20 per cent and 62 per cent respectively.

It may well not matter if the Republican Party doesn't get its act together, but Democratic Party leaders certainly do not want to take chances.

Of course, it isn't as if the party has never had to come together after a fierce primary contest before. It is one of the quirks of the American system that the first half of the presidential race features different members of the same party arguing why their someone is a bad choice for president only to spend the second half arguing why he or she really should be voted in.

In 2008, Mrs Clinton was in a bitter contest with then senator Barack Obama that went nearly all the way to the nominating convention, yet the party was none the worse for wear at the general election.

That party unity was aided largely by Mrs Clinton quickly endorsing Mr Obama and working to support him for the rest of the campaign.

A CLASH OF IDEOLOGY

Something feels different this time.

In pursuing his political revolution, Mr Sanders has sought to invalidate the establishment and cast Mrs Clinton as the archetype of that corrupt establishment. He has also cast himself as uncompromising on his principles.

With that as his core campaign message, how could he turn around at the end of it without sounding like a sell-out?

It is one thing for Mrs Clinton to say she will work with Mr Obama to help achieve the goals they both share, but Mr Sanders and his supporters have no easy justification for plugging back into a system they swear is corrupt.

In that sense, though the mess in the Republican Party has helped obscure the Democratic Party's problems, the Democrats have a similar if less severe unification challenge - one based on reconciling two conflicting identities and ideologies.

This does not necessarily mean the party cannot ultimately come together but it does suggest that, unlike in 2008, the candidates themselves have only bit parts to play in healing the rift they created.

Certainly the opposing party will always help. Either Mr Donald Trump or Mr Ted Cruz on the other ticket will help Mr Sanders swallow his disdain for Mrs Clinton and vote for her, in much the same way Republicans argue that a Clinton candidacy will motivate their base.

The party will also have to look to party leaders currently standing on the sidelines. If one is wondering why the likes of President Barack Obama and influential Senator Elizabeth Warren have yet to pick a side in the race, it may be they realise they will be needed to unite the party later. Both remain extremely popular figures and by staying objective now, they boost their chances of making a difference later.

For now, though, they have to hope that the Clinton-Sanders war doesn't leave them with too much to do.