Two writers offer different views on the impact of the impending carbon tax on the oil sector in Singapore.

In his Budget speech, Finance Minister Heng Swee Keat announced plans to charge a carbon tax from 2019 as part of the Government's efforts to cut greenhouse gas emissions.One question that arises is where Singapore's proposed carbon tax sits in the larger picture of the Paris Agreement on climate change, signed by over 170 countries.

The carbon tax will be applied to large "direct emitters" which cause more than the equivalent of 25,000 tonnes of CO2 (carbon dioxide) greenhouse gas emissions annually.

According to the National Climate Change Secretariat (NCCS), there are around 30 to 40 large direct emitters such as oil refineries, petrochemical manufacturers, power plants and large energy-intensive manufacturing plants. The Government will have consultations with industry and solicit public feedback in the lead-up to 2019.

It is well established among economists that market-based instruments such as carbon prices - imposed via taxes or some form of cap-and-trade scheme - are far superior to direct regulations that governments may impose, such as technical or engineering performance criteria for appliances, machinery, buildings and cars.

Greenhouse gas emissions are best controlled by putting a price on such emissions, and allowing markets to find the lowest-cost solutions to reducing emissions.

Yet, efficiency is relative: If the emissions policy of a country raises local costs, another country will gain a trading advantage by adopting a more lenient policy or choosing to "free ride". Thus, production may move offshore to the cheaper country with lower (or nil) standards, and global emissions will not be reduced.

This leads to perhaps the most fundamental policy question for the proposed Singapore carbon tax: Will Singapore's role as Asia's premier oil and petrochemicals business hub be compromised by the proposed tax? 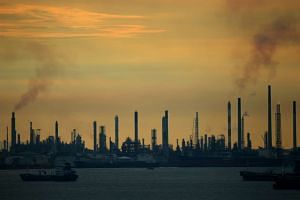 Singapore's local oil-refining capacity is 1.4 million barrels per day. It supports a range of economic activities, including physical and derivatives oil trading, bunkering, insurance, brokerage, banking, risk management and price discovery. It is one of three global oil-refining centres, alongside the United States' Gulf Coast and the Rotterdam oil-refining areas.

Not only is Singapore a major exporter of refined oil products, but it offers over-the-counter derivatives and price reporting that puts Singapore alongside - in global importance - the oil futures markets of New York and London.

Power generation, oil refining and petrochemicals manufacturing are estimated to account for about three quarters of total CO2 emissions in Singapore.

The power-generation sector, which produces a non-traded good (electricity), can pass on its costs to the end user.

Unlike the power sector, however, the oil-refining and petrochemicals sector operates in highly competitive international commodity markets. "A barrel of gasoline made in India is the same as the barrel made in Indiana", as a US industry association of oil refiners and petrochemical producers puts it.

The US oil-refining and petrochemicals industry, like its Singapore counterpart, competes directly with other companies in the industry from around the world.

In Asia, for example, India's export-oriented Reliance oil-refining complex in Jamnagar, Gujarat, is a single company with an over 1.2 million barrels per day capacity. Unsurprisingly, Reliance is a leading competitor in the Asian (and global) refined products markets.

Other major Asian players in the "East of Suez" refined oil-products market would include Asian national oil companies such as Thailand's PTT, Malaysia's Petronas, as well as South Korea's and China's oil behemoths. The Middle East national oil companies, with their export-oriented, state-of-the-art oil-refining and petrochemical complexes, constitute yet another set of formidable competitors.

At a planned carbon-tax rate of S$10-S$20 a tonne, the Government estimates costs equivalent to a US$3.50-US$7 per barrel increase in crude oil prices.

The carbon-tax costs imposed on Singapore refiners could range from US$4.8 million (S$6.7 million) to US$9.7 million per day. Asia's large refined oil-products markets are keenly competitive and a handicap of US$3.50 per barrel in operating costs would seem to be unsustainable in a competitive market where margins are thin.

A level playing field would require Singapore's competitors to credibly adopt similar carbon pricing policies at a minimum. Ideally, a follow-on to the Paris Agreement would be a global sector agreement for the international oil-refining and petrochemicals industry with clear, transparent and enforceable rules.

Without a level playing field, Singapore's pioneering oil and chemicals businesses could be hobbled from competing squarely in regional and international markets.

•The writer is a consultant in the energy sector and author of a recently published book, Singapore Chronicles: Energy.