The standard - matched by no other in the world - is six times better than Singapore's. Last year, our network achieved 133,000 train-km between breakdowns.

If that is not ambitious enough, Mr Khaw wants operators SMRT and SBS Transit to hit the target by 2020 - just four years from now.

At first glance, it looks impossible. It brings to mind other lofty targets which we had set for ourselves, such as the one to reach the World Cup finals by 2010.

But as they say, you have to set high targets if you want to get somewhere.

Mr Khaw put it well when he said: "When organisations need to be transformed... I think we need... (to) set clear stretch targets, motivate the troop, aim high."

Taipei Metro itself is a prime example of this. Before it attained its current status, its reliability was anything but sterling.

In 2003, its mean distance between failures was around 100,000 train-km. In a report "The building of a safe and reliable metro riding environment", Mr Tan Gwa-guang, president of operator Taipei Rapid Transit Corp, noted that "a series of operational accidents in the second half of 2003 had a major impact on passengers and received widespread negative media attention".

The report said this spurred the operator to launch an organisation- wide project to improve. Quality circles were formed. These met weekly to analyse failures and identify potential problems. Between 2008 and 2011, these groups came up with 211 plans to improve reliability. With the backing of high-ranking executives, all were implemented. 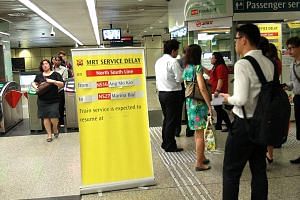 Long way to catch up with Hong Kong's rail reliability 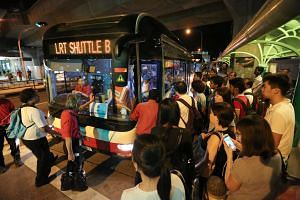 Fix the power first, then train upgrades and replacements

Rail breakdowns: Where does the buck stop?

Most interestingly, a cash incentive scheme was established to reward rank-and-file work teams which are able to outperform others in keeping glitches at bay.

Platform screen doors were erected, starting with the busiest stations. Track intrusion alarms were installed. These had an immediate impact on the number of disruptions caused by people falling onto tracks.

Can Singapore operators do the same? Clearly, Mr Khaw wants them to.

Much has already been done in recent years (including erection of platform doors and replacement of rail sleepers), and there are some results to show for it. The mean distance between failures has more than doubled from 58,000 train-km in 2011, even if part of this is attributable to increased train runs and an expanding network.

After all, as the denominator (train-km) increases, the failure ratio will naturally look rosier.

As the rail network is still growing, and as more new trains are injected into existing lines, the denominator will continue to increase.

But to rely solely on this to bring down the number of disruptions will be akin to a man trying to address his expanding waistline by buying bigger trousers.

So, the question is, does Singapore have what it took Taipei to scale the reliability charts?

For sure, it will have a tougher time than Taipei. Firstly, Taipei's system is nationalised. There is only one operator, and it is the government. There are two private operators in Singapore, each answerable to its own shareholders, and each operating a system that is significantly different from the other. So, even if the Government and operators can work seamlessly together, we have a huge duplication of resources.

When (or if) the Government manages to convince operators to switch to the new rail financing framework, things will be somewhat easier. Because then, the Government will decide when to replace assets. And it will (hopefully) set clear targets for the operators, with suitably large carrots and an even bigger stick to spur them on.

Secondly, will operators here have the single-mindedness demonstrated by Taipei Rapid Transit? As long as they remain listed entities with shareholders to answer to, they will continue to have to juggle opposing objectives.

These significant differences make it doubly hard to attain its level of reliability. Yet, Hong Kong still shines. Last year, MTR clocked a mean distance between failures of 360,000 train-km. But more impressively, it had only eight major disruptions (those lasting more than half an hour) for the year - compared with 29 for Singapore, and 39 for the significantly older and higher-capacity Tokyo Metro (2014 figure).

These disruptions also seem to be the hardest kind to reduce, as seen in Singapore's case.

Hong Kong's MTR, however, has been able to do so admirably. Its sterling track record speaks for itself - the company has transit operating contracts in cities such as Beijing, Shenzhen, Melbourne, Sydney, London and Stockholm.

So, while Taipei's mean distance between failures is an excellent target to aim for, Hong Kong's accomplishment is no mean feat.

And while no system in the world is exactly alike, ours probably has more in common in form and function with Hong Kong's than Taipei's.

Having Taiwan's reliability standards, and Hong Kong's low number of major disruptions, is the way to go for Singapore's rail operators.