WASHINGTON • Washington could soon bypass Portland, Oregon, as the American city with the highest share of bicycle commuters, due in part to growing competition among bike-borrowing programmes.

But while the city embraces its innovative bicycling culture, long-time riders argue that the capital still lacks the infrastructure to support it.

Transportation planners in the capital are in a bind. Commuters from the surrounding suburbs almost double Washington's daytime population to a million people, and subway delays, car accidents and motorcades are a source of regular gridlock.

Three new programmes - Mobike, LimeBike and Spin - do not require any: A frame-mounted lock immobilises the bicycle until a rider scans a barcode with a smartphone camera to activate it. When finished with a trip, the rider can leave the bike anywhere legal.

But critics worry most about beginner urban riders navigating the segmented nature of the city's bicycle lanes: They begin and end seemingly at random, forcing cyclists to veer into four-lane roads stippled with potholes and urban grit. Buses and hurried traffic push them into the right-most lane, where doors of parked cars can swing open unexpectedly, catapulting cyclists.

"I take the least intrusive route possible, and I still can't prevent getting 'doored'," said Mr Marcus Greenberg, a bicycle commuter of four years, lamenting that drivers curse him onto the sidewalks while pedestrians curse him onto the roads. "Without a bike lane, you're the minority - everybody hates you. You flip over your handlebars, and the driver wants you to pay for the dent your head made in their Prius."

Critics worry most about beginner urban riders navigating the segmented nature of the city's bicycle lanes: They begin and end seemingly at random, forcing cyclists to veer into four-lane roads stippled with potholes and urban grit.

One barrier to consistent bike lanes is what riders call "bikelash", or local resistance to bicycle-lane installation when it threatens parking availability.

Another barrier is the prioritisation of "levels of service", an engineering measurement for the rate at which a motor vehicle can be moved through an urban intersection to minimise congestion.

Such was the case on Grant Circle in north-west Washington, where a recent plan to install a protected bike lane was scratched because it would have narrowed the motor vehicle path to one lane from two.

"In urban bicycle route planning, the joke is: We can do absolutely anything we want - as long as it doesn't inconvenience a single driver in a single place for a single second," said Mr David Cranor, chairman of the D.C. Bicycle Advisory Council.

Critics argue that both priorities are short-sighted and overlook the city's long-range plan for decreasing urban congestion: getting more citizens on bikes.

In several European cities, biking incentives are programmed right into the traffic signals. Automated "green waves" allow bicyclists - who have their own well-marked lanes and traffic lights - to maintain a 20kmh pace without encountering red lights, despite traffic controls on car lanes. 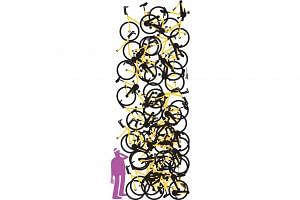 Bike-sharing: Time to crack down on free-riding?

Ms Tamara Evans, advocacy director at the Washington Area Bicyclist Association, said: "We'd like to see this city be much braver about saying to people, 'Look, this is the most sustainable transportation plan. It's cleaner, it's healthier, and we're just going to build this.' "