Beijing and Tokyo aren't going to carve each other's names on trees, but a new phase of bilateral ties is in sight

Since returning to power at the end of 2012, Japan's Shinzo Abe has made several visits to China. So, when Japanese and Chinese officials cheered his trip to China last week as the first "official" visit to China by a Japanese prime minister since 2011, they were talking it up more than a little.

What's true is that for the first time in seven years, a Japanese premier travelled to China for the specific purpose of holding formal bilateral talks.

Be that as it may, the three-day tour last week got the world's attention and deservedly so. The two declared a "turning point" in their relationship, signed US$2.6 billion (S$3.6 billion) in business deals and, importantly, appeared ready to work towards a measure of convergence between China's signature Belt and Road Initiative and Japan's push for "quality infrastructure", part of its Free and Open Indo-Pacific Strategy.

"It was not a smooth ride," Chinese President Xi Jinping told the visitor. "But with our joint effort, the relationship has become more normalised. A healthy relationship between China and Japan serves the basic interests of both countries."

Remarkably, it wasn't that long back that Chinese officials were referring to Mr Abe as an "unwelcome person".

Watching visuals of Mr Abe shaking hands with Mr Xi on the sidelines of the Beijing-hosted 2014 Apec summit, Mr Richard Armitage, the former US deputy secretary of state, is said to have remarked that it looked like Mr Xi and Mr Abe "were smelling each other's socks".

This time, though, Mr Abe was toasted and feted. The worries about US unilateralism and protectionism that Mr Xi shared with him gave the encounter the air of a meeting of equals rather than one of a baronial master receiving an errant underling - which was how Chinese Foreign Minister Wang Yi handled his Japanese counterpart not too long ago only to discover that Mr Taro Kono could give back as good as he got.

Perhaps the Chinese even wished Mr Abe could stay longer. He couldn't, and that was because friend and ally Narendra Modi, the Indian Prime Minister, was due in his hometown the next day for the annual summit of Japan-India premiers.

Indeed, in some ways, the Beijing trip was about Mr Abe playing catch-up with Mr Modi.

The Indian leader had travelled to Wuhan, China, in May to talk peace with Mr Xi after a particularly tense time in bilateral ties, including an eyeball to eyeball confrontation between troops in a Himalayan valley.

Those ruffles were brought on by Chinese worry about the developing US-India embrace and, on the other side, a variety of Indian complaints, including aggressively assertive Chinese behaviour along their un-demarcated boundary and, of course, uncertainty about US policy and intentions.

The lengthy "vision document" Japan and India unveiled at the end of Mr Modi's visit speaks of starting joint exercises between their armies (their navies are already deeply interlinked), negotiations towards allowing the Indian military and the Japan Self Defence Force to use each other's bases for logistics support - and, tucked away in the statement, an innocuous reference to collaborating on "smart islands". 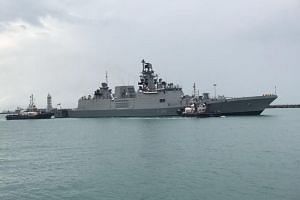 India, Japan and US to hold war games in US territory for the first time

China and Japan ink $3.6b in deals as ties warm during Abe visit

This is euphemism for the rapid development of the Andaman and Nicobar chain of islands, India's toehold in South-east Asia and a key strategic chokepoint for the vital Malacca Strait.

It is a testament to the shifting sands of history, not to speak of loyalties and friendships, that these islands were occupied by Japan during World War II.

Mr Modi's extended meetings with Mr Xi, some very public, were equally about signalling to the Donald Trump administration to not take India for granted; Mr Abe's Beijing trip could well have had a similar purpose. That said, improved Japan-China ties is positive not just for East Asia but also the wider continent, and timely.

The decision of Mr Abe's predecessor in 2012 to nationalise the uninhabited Senkaku islands, which the Chinese call Diaoyu, poisoned the chalice that passed into Mr Abe's hands at the end of that year. As the protege of former prime minister Junichiro Koizumi, whom the Chinese looked upon as a revisionist and whose annual visits to the Yasukuni Shrine they found revolting, Mr Abe's return to power, enduring popularity and apparent durability creased many a brow in Beijing. His stated determination to revise Japan's post-war Constitution only fuelled their worst fears.

In his 2018 New Year's "reflections", a confident Mr Abe had waxed on about this being the year of executing his plans, assumedly including his election pledge to update the Constitution and remilitarise.

"We will transition the policies we pledged during the 2017 general election into execution, one by one," he had said then. "Looking squarely ahead to 2020 and beyond, the Abe Cabinet is determined to press forward vigorously with reforms towards building a new nation, hand in hand with the Japanese people."

But a year can be a long time in global politics. Weeks into the New Year, his friend "Donald's" boorishness and go-it-alone ways left Mr Abe appearing flat-footed, his diplomacy in tatters.

He was not consulted beforehand while Mr Trump accepted North Korean leader Kim Jong Un's offer of direct negotiations and then was blindsided by Beijing's assertion of influence on the Korean question with Mr Kim's very public kowtow to President Xi.

Mr Abe's trip to see Mr Trump in April, the second time he was received by the US leader at his Mar-a-Lago resort, saw Mr Trump sport the air of a host who'd had to reluctantly accept his house guest to keep up appearances.

Close observers of the US-Japan relationship noted that this second Mar-a-Lago summit had been a turning point for Japan: It seemed to dawn on Mr Abe that upholding the international order now fell to him and the US could not be counted on to be in the game.

What's more, at his Senate confirmation hearings for the position of Secretary of State, the spy chief Mike Pompeo, observers noted, twice said the upcoming summit between his boss and Mr Kim was meant to tackle the North Korean nuclear threat to the US. Indication, if any, that the same concerns extended to US allies, who too faced the identical threat, came in a cursory way - at least from Mr Pompeo. 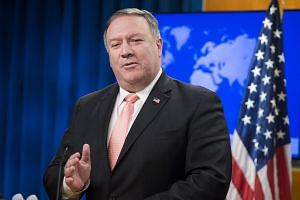 These lessons have gone home and Mr Abe has read his cards well. At the end of the day, regardless of the tightness of the US-Japan defence relationship, it would be foolish to leave his nation's security in the hands of unpredictable American leaders.

The timing, too, is correct. In the Japanese assessment, the Chinese national psyche tends to swing between periods of great ebullience and deep despair. The latter trait is more in play now as the Chinese economy slows, stocks and the currency take a hammering as the US turns to contain its rise in myriad ways and global pushback is mounting against its signal foreign policy overture, the Belt and Road Initiative.

This tempers Chinese behaviour and Japan figures it could gain from emollience, just as when it stepped in with investments and tacit diplomatic support when China was in the international doghouse after the 1989 Tiananmen Square incident.

Mr Abe has also learnt from Mr Modi's handling of China that while it is important to keep Japan's friends close, you have to keep your foes and rivals even closer. Where their strategic competition goes, very little has changed on the ground, or the waters for that matter.

Last month, Rear-Admiral Tatsuya Fukuda, who led Japan's Fourth Escort Flotilla through a landmark deployment in South-east Asia and Sri Lanka, told this writer that the PLA Navy continued to act assertively with Japanese vessels transiting in the East China Sea. The PLA Navy was more relaxed in the South China Sea, he added, perhaps because Beijing is confident it controls those waters to its satisfaction.

It will be a while then before China and Japan start carving each other's names on gingko trees. While Mr Abe has done everything in his power to not rock the alliance with the US, swallowing more than one insult from its louche leader, the Beijing trip also serves notice to Washington in the gentlest way that Japan should not be taken for granted - just as Mr Modi signalled to Washington in May.

On the other hand, should the deal-loving Mr Trump strike some sort of grand bargain with Mr Xi, Japan would be better positioned to deal with China by having proactively improved ties.

The real issue, though, is probably worry about the fallout from sinking US-China ties. Almost everything points to a looming confrontation between the entrenched superpower and the rising one, a tussle that could endure long after Mr Trump leaves office.

The Japanese archipelago is dotted with US military facilities - from the three air force bases to dozens of smaller installations. This makes parts of Japan - whose role in their defence alliance is to protect US facilities on its shores and maritime waters - a legitimate target for Chinese strikes in times of conflict.

As for himself, Mr Abe must be fully aware of his nation's limitations on confronting China, including the issues that come with a shrinking population. Recruiting capable young people into the Japanese military is no easy task; most would rather have all-day access to their smartphones than peer through binoculars, or keep watch on the radar, to make a living.

While there is growing interest in the military, and more and more young Japanese men do wear facial hair - regarded as a sign of machismo-this probably is more of a fashion statement than signs of a growing militaristic temperament. The country remains deeply wedded to its pacifist instincts.

Under the circumstances, Mr Abe has a duty to move Japan out of harm's way to the extent he can. And this is what he probably sought to accomplish in Beijing last week.