A run along the scenic Charles River in Cambridge, Massachusetts, is a good way to get a sense of perspective.

The river runs through the heart of the university town where the Ivy League college of Harvard is located, twisting and winding its way along.

Look ahead and you might spot lovely spires rising on the horizon, seemingly just ahead.

But as you make your way forward, it soon becomes clear that this is an illusion. Those buildings lie deceptively around a bend in the river, farther afield.

So, too, it often is with life and affairs of the world, with simplistic straight-line projections into the future often being confounded, amid the ebb and flow of events.

Take, for example, the seemingly unstoppable rise of Japan in the 1980s that sparked much consternation in the United States, or the much-trumpeted End of History idea in the 1990s, which predicted the eventual and inevitable rise of liberal democracies everywhere.

Both ended in ways that were not foreseen, with events turning out quite differently from what was anticipated.

So, pondering the future calls for what I term "ebb and flow" thinking, rather than charting lines from where we are today to where we must be, going by current trends.

In my view, there is nothing inevitable about the rise of China, the decline of the US, or an eventual clash between the two.

Nor is the present global world order cast in stone. Rather, such geopolitical trends are likely to ebb and flow over time, with events that might take us by surprise and even be beyond the control of key players. 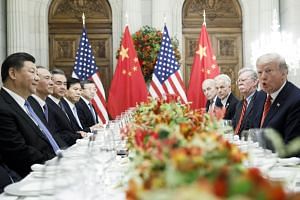 Indeed, even the recent sudden turn in Sino-US ties over their trade dispute, or wider contest for global influence, was not something that many had envisaged not so long ago.

Many Western commentators had asserted with great certainty that with economic reforms would come political liberalisation in China, making it "more like us". Their dismay that this has not happened now explains some of the angst about the rise of China in Washington circles.

Some commentators in China take this further, noting that the present world order was framed by Western powers when China was weak. But, as with all things in life, such an order is impermanent and not fixed in time.

A reordering of global rules and reform of some of its key institutions is called for, as China rises and takes its rightful place among the great powers of the world. But less clear is just what this new global order and its institutions might look like.

The idea of G-x also recognises that the world can no longer be dominated by just one or two countries. While China hawks might wish to see Beijing reassert itself as the dominant player in Asia, others such as Japan and India are unlikely to accept such a regional hierarchy.

Certainly, a reordering of global rules and reform of some of its key institutions is called for, as China rises and takes its rightful place among the great powers of the world.

But less clear is just what this new global order and its institutions might look like. The G-8 or G-20 groupings seem outmoded to some, with suggestions that these might be replaced by a G-2 world, in which the US and China might work together to sort out the world's challenges, such as climate change.

In today's world, this however, is unlikely to be accepted by other key countries such as Japan, India, Russia or Asean, all of which will want a say in global decisions that affect them.

Time magazine's editor-at-large Ian Bremmer has argued instead that we now live in a G-Zero world, in which no country or alliance of nations is able, or willing, to step up to take charge and bear the political, financial and military burden of global leadership.

More likely, he contends, the world will muddle through or leave major issues unattended for lack of a consensus.

In a recent discussion with him, I offered another view. Rather, my sense is that we have moved into a rather fluid, even volatile, G-x world, where x represents a variable.

Differing coalitions or networks might emerge to address specific issues, balancing interests and shifting over time. For example, just when everyone thought that the Trans-Pacific Partnership agreement was dead, a coalition of countries, led by Japan, emerged to give the pact a renewed push.

Then there is the US-led Free and Open Indo-Pacific idea, which has emerged partly in response to the unease in several countries in Asia over China's more muscular assertions of power in this part of the world.

The idea of G-x also recognises that the world can no longer be dominated by just one or two countries. While China hawks might wish to see Beijing reassert itself as the dominant player in Asia, others such as Japan and India are unlikely to accept such a regional hierarchy.

Agreeing with this view, Mr Bremmer notes: "In North America, it is still mostly G-1, with the US dominating. In the Middle East, it is G-x, with several countries competing, which hate each other. In Asia, it is increasingly G-1, which is getting more and more uncomfortable for some."

Similarly, those in Washington who would like to see a "decoupling" between the West and China, or are promoting the idea of a "clash of civilisations", might also face a push-back.

Rather than the old Cold War idea of alliances or blocs seeking a traditional balance of power, the future might more likely be one of shifting G-x networks, with like-minded countries coming together to tackle pressing common challenges, even if they also compete on other fronts.

The challenge then will be to create the conditions and mental frameworks to make such shifting G-x alliances more durable, and stable enough to allow for a world that, as former US president John F. Kennedy once put it, is "safe for diversity".

A version of this article appeared in the print edition of The Sunday Times on May 19, 2019, with the headline 'A world where events 'ebb and flow''. Subscribe
Topics:
More
Whatsapp Linkedin FB Messenger Telegram Reddit WeChat Pinterest Print Purchase Article Copy permalink