Singapore faces twin challenges as new Asean chair: at a time of great changes in the international environment, it has to set directions for the grouping while charting its own course

One of the memorable moments of Singapore's chairmanship of Asean a decade ago came soon after troops in Myanmar fired with automatic weapons on crowds of civilians who had been demonstrating in Yangon for democracy.

Buddhist monks were in the forefront of the protests, which took place in September 2007 and led to the shooting which claimed several lives. Asean foreign ministers gathered in New York for the annual United Nations General Assembly came out to say they'd expressed their "revulsion" to their Myanmar counterpart, both over the fatalities and the use of such violent force. They said they were "appalled" by the use of automatic weapons and urged the release of pro-democracy activists, including Ms Aung San Suu Kyi.

The language contained in the statement authorised by the chair was startlingly blunt for a grouping that prides itself on consensus and non-interference in each other's internal affairs. But a point had been made: if the situation demanded it, the code of non-interference would be challenged in practice, if not in principle.

Life was a mite easier then, of course. To start with, it was a different Asean. The great rift that surfaced in 2012 - when Cambodia wrecked the annual Asean summit to unabashedly stand with China's interest over a reference to the South China Sea dispute - was yet to happen. Nor had the Rohingya issue in Myanmar - which opened fault lines between Muslim and non-Muslim Asean - loomed so large. Al-Qaeda, not the Islamic State in Iraq and Syria, was seen as the focal point of global terror.

In the wider neighbourhood, North Korea, today's big migraine, was still involved in the Six-Party Talks mechanism and even indicating that it could shut down its nuclear facilities in exchange for fuel and normalised ties with Japan and the United States.

And on the economic front, globalisation was not under challenge as it is currently. No one could have imagined a man like Mr Donald Trump in the White House. China and Indonesia were yet to embark on policies that actively sought to lengthen their domestic supply chains. Indeed, India, raised on an economic policy of self-reliance, had recently inked a landmark Comprehensive Economic Cooperation Agreement with Singapore, seen as a watershed step for its economic engagement with the wider world. The global financial crisis, which led China to the conviction that its moment had arrived and America's decline inevitable, was yet to acquire gale force.

This week, as Singapore once again took the rotating Asean chairmanship, the people whose responsibility it is to see the 10-member group come through the year intact, if not enhanced, will likely have a tougher task than their counterparts of a decade ago.

They will be doing so at a time when Asean's external environment is in flux as never before, presenting a dual challenge of setting directions not only for the grouping, but also for their own self as a nation that traditionally enjoyed a close strategic friendship with the United States and is now swiftly building on its excellent ties with China. 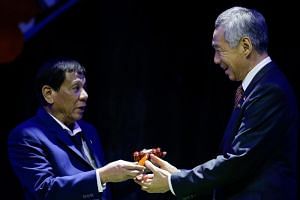 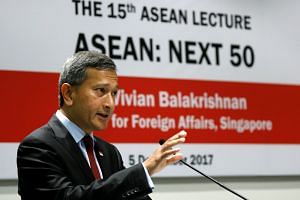 The latest National Security Strategy (NSS) issued by the US on Dec 18 last year, and the Australian Foreign Policy White Paper issued a few weeks before, all point to a period of great turmoil as an era of confrontation looms in Asia.

"For decades, US policy was rooted in the belief that support for China's rise and for its integration into the post-war international order would liberalise China," says the NSS, without mincing words. "Contrary to our hopes, China expanded its power at the expense of the sovereignty of others. China gathers and exploits data on an unrivalled scale and spreads features of its authoritarian system, including corruption and the use of surveillance."

Repeatedly calling out China on all fronts, the NSS, for the first time, puts the "Indo-Pacific" region ahead of the Middle East in the section discussing the regional implications of American policy. It also promises the American people a military so overwhelmingly powerful that its soldiers will "never be in a fair fight".

Navigating these treacherous waters will not be easy.

Much of Asean, like Australia, is pondering the dilemma of having to balance the US for security, and China for prosperity. China's punitive actions on the economic front with the Philippines and South Korea have brought these countries to heel, although both remain formal allies of the US.

At the same time, China's implied diplomatic line, that the region is overwhelmingly dependent on its markets, is beginning to be questioned in some capitals even as a growing body of reportage suggests that the projects grouped under President Xi Jinping's trademark Belt and Road Initiative may not be as altruistic as Bejing cranks them up to be.

That said, there is also no certainty that the American NSS will translate into action, or that the tax cuts ordered by President Trump will not bloat the US budget deficit further, crimping its appetite for global engagement.

Even as the US turns inward-looking, it is doing so while backing a bunch of surrogates seemingly ready to step up to the plate: Japan, Australia and India. Beyond, the European Union, one of Asean's most vital partners for investment and trade, is stirring as a defence cooperative quite apart from the US-led Nato.

As Prime Minister Lee Hsien Loong said in his New Year message, the external environment will remain uncertain in 2018 thanks to tensions on the Korean peninsula, threats posed by terrorists and a yet-to-be fully articulated US approach to Asia.

All this will weigh on policy. In mid-year, as Singapore yields its current position as Asean's key interlocutor with China, it is set to take on the same role for Asean with the EU. Brussels will doubtless pressure it for help to get a seat at the East Asia Summit, and it has an increasingly strong case to do so.

Yet, the more swiftly the EU is seen melding in military terms, the less willing will Beijing be to countenance having its presence in key Asean-led councils. Indeed, it could impact Beijing's appetite to sign with Asean a binding code of conduct on the South China Sea, even as it has already altered the status quo substantially to its advantage. When it comes to the South China Sea, the EU, the US, Japan and India have outsize expectations of Singapore for the year. They might do well to temper some of that.

For its chairmanship, Singapore has identified its key twin goals as "resilience" and "innovation", the latter a nod to the swiftly changing technology landscape marked by the rise of additive manufacturing and the digital economy.

The resilience part - encompassing security, financial and economic resilience-will prove the heavier going. Indeed, there will be times when it may have to make some tough calls, even if they are nations with which its strategic ties are deepening by the day.

Balancing the competing pulls - staying true to its policies of backing a rules-based international order and a pluralistic, multi-ethnic society at home, and trying to dyke the holes that outsiders might seek to punch in the Asean wall - is by no means going to be a walk in the park.

It is a matter of relief for Singapore that new Asean Secretary-General Lim Jock Hoi, who took office this week for a fixed term of five years, is from a country with close ties to Singapore - Brunei. Datuk Paduka Lim is an accomplished diplomat who is also well-versed on trade issues.

As during its last stint as Asean chair, Singapore could find Myanmar to be a party-spoiler this time round as well. This will likely happen as the region realises that the peace deal between Bangladesh and Myanmar on the Rohingya issue was really a time-buying mechanism for Ms Suu Kyi which the military has reluctantly endorsed.

As a small country, Singapore has to be friends with everyone, but at times it needs to advance its own interests

In time, when it comes to executing the agreement, the problems will resurface and Myanmar's sincerity will be called into question. While "revulsion" may not be appropriate this time round, it might make sense to ready phrases such as "deep dismay" and "immense disappointment".

Asean centrality would be meaningless if it is left to the foreign policy heads of China or the EU, or even the Pope, to take the high ground on a focal issue such as the Rohingya.

North Korea will be another headache for Asean, regardless of that country's recent peace overtures to the South. The Asean Regional Forum (ARF) is a rare multilateral forum through which the North engages its neighbourhood, since all other avenues have been closed off to it. Diplomats who attend ARF meetings say they serve as a means for Pyongyang to accept feedback on the quiet, even as it is helped to present its own core concerns to the wider region.

Singapore's Foreign Minister Vivian Balakrishnan was candid when he pointed out recently that "we are not short on divisive issues".

And he was probably speaking as much from necessity as choice when he said Singapore's preference would be to have "less rah-rah and less formal meetings and more quiet time for our leaders to sit and talk without an audience, without a gallery, to sort things out".

No one is in any doubt that the list of issues is indeed long.