The film anthology 7 Letters is a success. Critics like it. So do audiences, who have given it good word-of-mouth. Tickets for every screening at Capitol Theatre and the National Museum have been snatched up. The demand is so good, the film will get a limited run in seven Golden Village cinemas later this month.

7 Letters works as entertainment, but also as a piece of art that Singaporeans can hold up as a proper SG50 tribute - definitely not a fishcake with an SG50 sticker.

Composed of short works from seven film-makers, it stands between the "artsy" and the lowest-common denominator type of comedy or horror work.

What's interesting - and disheartening - about the local movie scene is how rare mid-brow films like 7 Letters are.

Our films tend to go straight into the arthouse and festival circuit, or into mainstream cinemas. Festival films sometimes trickle into local cinemas, but these get a small number of screens and a short run.

When done right, mid-tier films combine the best of both worlds - substance with mass appeal - as 7 Letters obviously does.

Most Best Picture Oscar winners are middlebrow - think this year's Birdman, last year's 12 Years A Slave, or The King's Speech (2010). 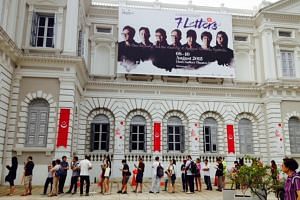 7 Letters, the acclaimed SG50 film project, to get theatrical release for one week

In Singapore, the field is sharply divided between the arthouse professionals (the Eric Khoos and the Anthony Chens, though they might dispute that label) and the kings of the commercial (the Jack Neos and the Gilbert Chans).

Why does this happen? Seven lessons can be extracted from the making of 7 Letters, and how it found that magical Middle Path.

1. GIVE ARTISTS A BUDGET AND A DEADLINE

The seven film-makers in 7 Letters had a fixed sum given to them by the Media Development Authority (MDA). They had to scramble to get their films ready, which did not give them time to raise more funds. They worked with what they had, and their sponsor, the MDA, gave them free rein over their stories.

Compare the 7 Letters' hands-off approach with what commercial film-makers have to do: they get some funding, then find they need more, as they want to include more eye candy like bigger fight scenes.

Sponsors step in, wanting their products or message in the film. Scenes are re-written to include banks, soft drinks and watches. Anything that anyone might find offensive is removed, because sponsors do not want to be associated with controversy.

A PG or PG-13 rating - the most inclusive and, therefore, the most profitable of the range - is the target. Bit by bit, a promising middlebrow work melts into run-of-the-mill sludge.

7 Letters has an unfair advantage in that it contains seven short films. Don't like one story set in a Housing Board flat? Wait 20 minutes, another one will come along, set in a bungalow or a kampung.

But it offers one lesson: mix it up. A sameness pervades the SG50-linked period drama 1965, now in cinemas, where, by some miracle, all key events happen on the same street, the same generic Geylang-Chinatown-Katong (GeyChiKa?) set seen in too many television shows because everyone shoots on the same Infinite Studios backlot on Batam. See also the "TV look" problem below.

5. FIND ONE ANGLE, THEN SELL IT

7 Letters has no stars, no big action scenes. But it has one central idea: Singapore film-makers creating love letters in film, to Singapore. As hooks go, it is rather weak, so the team behind it cleverly opted to keep screenings small and exclusive, and so let word-of-mouth do the work. Queues formed when shows were added. Tickets were gone in three hours.

The middlebrow crime thriller Unlucky Plaza was given a limited cinema release in April this year; as word-of-mouth spread, helped by a social media campaign, its run was extended. The film's marketing was anchored in one clear idea in its tagline: "S*** hits the fan in the world's safest city".

The social drama 1965 was at first thought to be a Lee Kuan Yew biography (with, at one point, Hong Kong actor Tony Leung attached to play Mr Lee); some thought it was a political drama about the expulsion of Singapore from Malaysia in 1965. By the time it was released last month, confusion reigned.

6. CAST FOR THE PART, NOT THE DEMOGRAPHIC

Promising middle-ground local movies are ruined because someone decides that one actor is more popular and so has to be hired over someone more suitable.

This leads to bizarre situations, such as in one recent comedy when a 60-year-old, the star of the movie, was paired as husband and wife with a 30-year-old actress.

Singapore films are rife with bad or lazy casting: daughters who look as old or even older than their mothers, skinny model types playing coffee shop assistants and the same elderly character actor - "that guy" - playing the durian seller or taxi driver in every television show or movie.

Arthouse film-makers here frequently break casting rules to broaden local appeal. They throw television actors or singers into roles which are too abstract to handle, create random cameos so stars walk in and out, include pretty faces who cannot act, or use English-speaking actors in Mandarin-speaking parts. By riding on star power or sex appeal, they hope to create mid-brow work, but end up making a mess because they refuse to own their arthouse status.

The "look" of Singapore movies used to be its weakest point. Too many habits were imported from television soap opera productions - static cameras, medium close-ups, characters yakking while planted around a dining table and flat, white, shadowless lighting. That "TV look" is starting to give way to better shot planning, more fluid framing, editing and lighting.

In 7 Letters, the beauty of the moving image is taken more seriously than ever before, thank goodness. Visuals are not frills, and cinematographers and sound engineers are as much artists as anyone on set.

My wish for SG50? More such quality mid-brow films please.