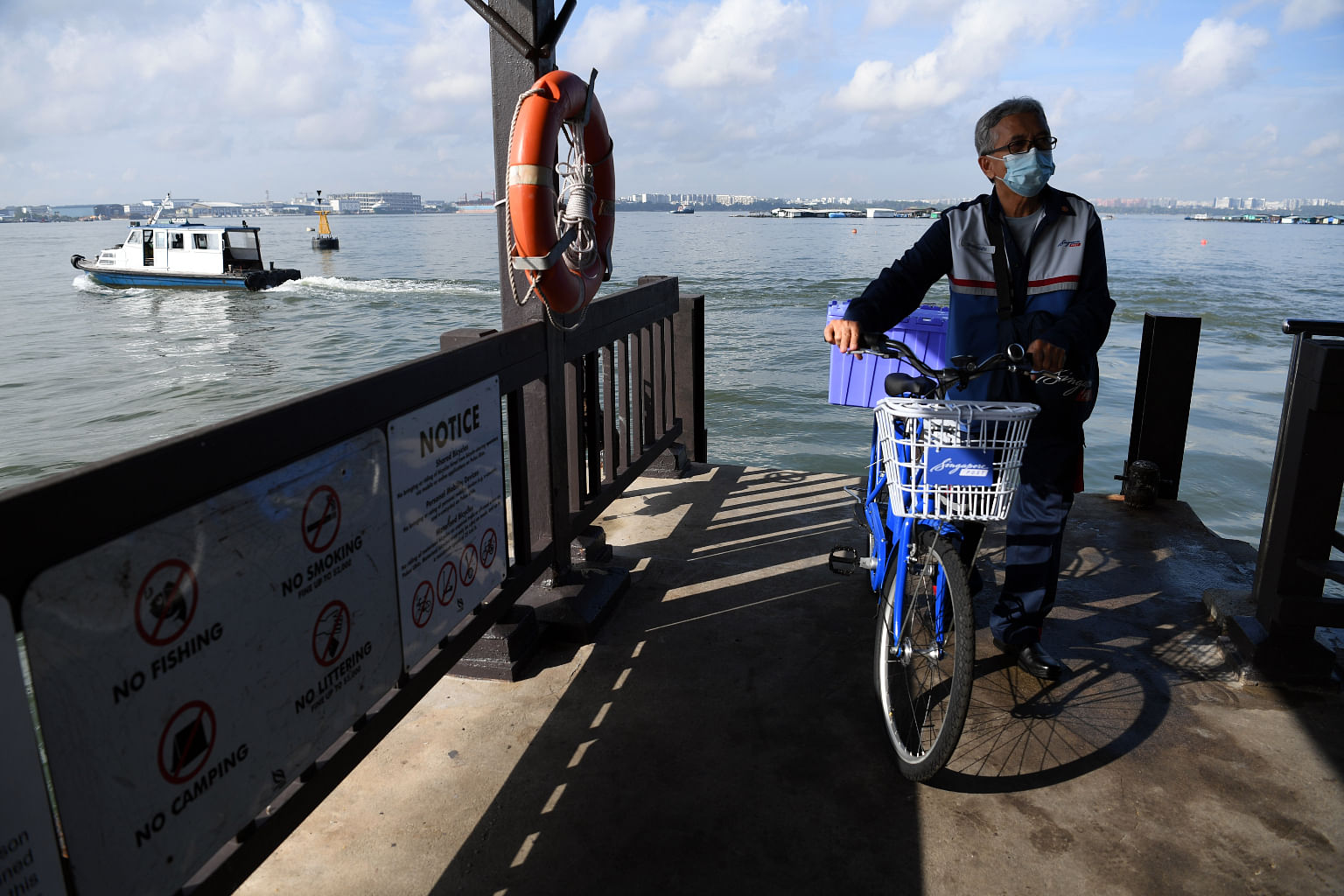 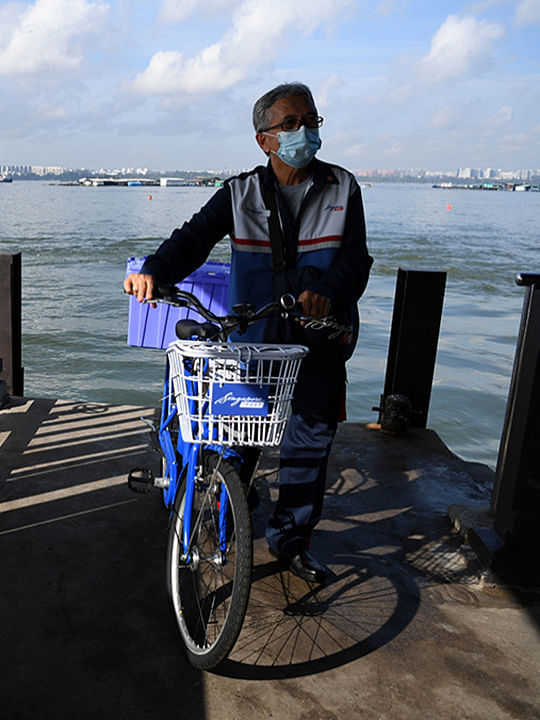 SINGAPORE - Mr Shahruddin Datok, 66, stands with his trusty bicycle on the pier, ready to begin another day. He has one of Singapore's more unusual commutes, one that includes a bumboat ride.

But then, Mr Shahruddin has an unusual job: He is Pulau Ubin's only postman.

His workday begins in the morning, when Mr Shahruddin sorts through mail at the Singapore Post regional base in Tampines. There, he will collect all the mail bound for the island. There are usually two or three trips to the island every week depending on the volume of mail received.

Mr Shahruddin then sets off to catch a 15-minute bumboat ride to get to Pulau Ubin. He does this two to three times a week, covering around 30 or so addresses scattered around the island.

He has been delivering mail to this area for about three years, so he is known to the islanders and knows the trails there better than most.

As he gets on the boat with his bicycle, he makes a final check that the mail is secure and says with a laugh as perspiration runs down his forehead: "Not much mail today but I really look forward to going over to the island - it's such a great way to escape the mainland and get some fresh air and exercise."

Mr Shahruddin is one of the few postmen at SingPost who does offshore deliveries. In one of his first stops for the day, he hands over a letter to a recipient at the Season Live Seafood Restaurant.

Even if there are only a handful of letters to be delivered, that will not stop him from making the trip to the island.

He knows the residents well and tries to personally hand them their mail but most of the time there won't be anyone around to receive them.

Delivering letters to Ubin presents different challenges compared to delivering to homes on the main island. For one thing, the roads aren't always in good condition. Here, Mr Shahruddin pushes his bicycle through a rocky stretch in a relatively untrodden area of the island to deliver his mail.

He then takes a brief rest from the scorching midday heat and has a drink.

In the busiest part of the island, often known as the 'Orchard Road' of Pulau Ubin to locals, Mr Shahruddin double checks the mail again to help him to plan his route for the day.

For the last part of his job before he departs back for the mainland, Mr Shahruddin opens a mailbox by the jetty - the only one on Ubin - cleans it thoroughly and checks if there is any mail to be carried back to the SingPost Tampines Regional base to have them sorted for delivery.

Ubin isn't the only place outside the main island that SingPost has to deliver to. Today, SingPost delivers to three offshore islands: the other two are Sentosa and Jurong Island.

Sentosa, with its modern luxury residences and facilities, stands in stark contrast to the rustic Pulau Ubin mail route.

Two postmen deliver to Sentosa - Mr Yugendran Sanmuganathan, 22, covers Resorts World Sentosa and the various leisure and food and beverage businesses on the commercial side of the island while Mr Mohamad Hisyam Selamat, 25, tackles the residential areas there.

Here, Mr Hisyam is seen riding past along the coastline of Sentosa Cove in his fully electric three-wheeler.

He then delivers a stash of mail at Imbiah Road with the cable car seen in the background.

Mr Yugendran makes his way over to Siloso Beach.

SingPost's roots go back to 1858, when the post office became an independent department during colonial rule.

Its service areas in the past included islands which were inhabited then. But as islanders relocated to the mainland over the years, postal service to most islands stopped as well.

SingPost accepts mail to Pulau Tekong but does not physically deliver it to the island itself as it is a restricted area. It delivers such mail to the guardroom at the SAF Ferry Terminal in Changi.

Some people who live on islands not covered by the service apply for post office boxes on the mainland to receive their mail. Mail addressed to other islands is returned to the senders.

At the general post office in Eunos,a pile of mail marked as 'Post Restante' awaits to be collected. Poste Restante is a free service for a limited period - usually three months - for the delivery of travellers' mail over the counter. Poste restante is an address on mail indicating that it should be kept at a specified post office until collected by the addressee.

Mr Shahruddin says being one of a handful of "overseas" postmen is something special.

"I get to enjoy the sea breeze on the boat ride, interact with the inhabitants and more importantly, get to cycle with almost no traffic around an island that's unique in our fast-paced world."