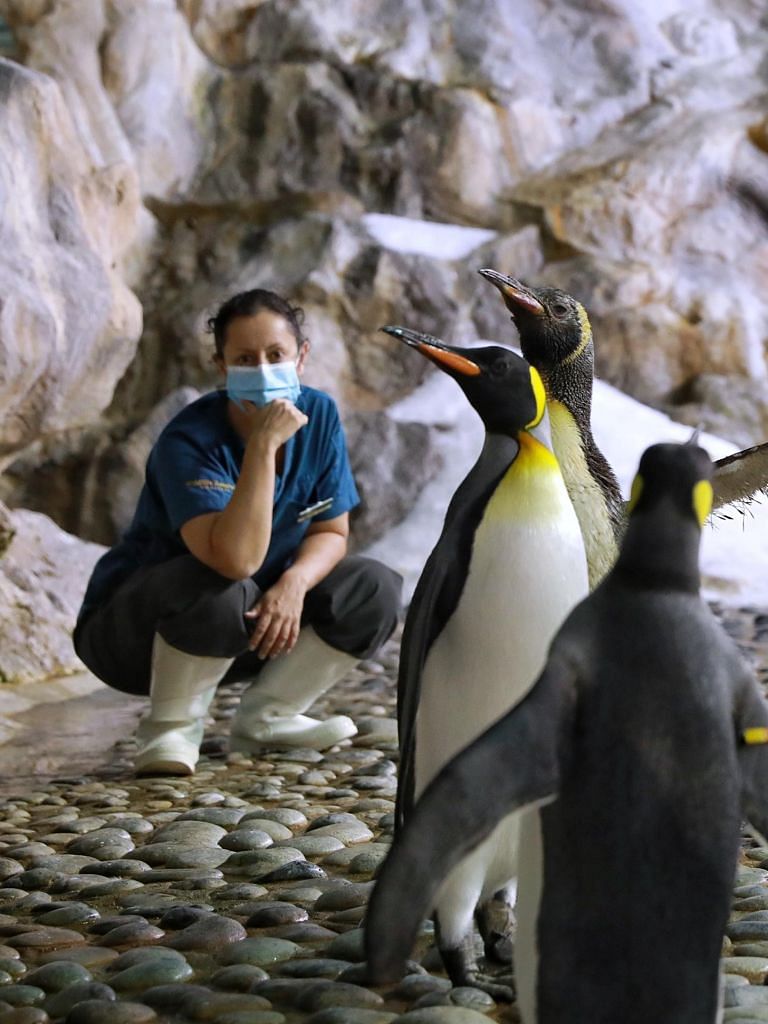 SINGAPORE - Looking dapper in their classic black-and-white "tuxedos", they strut down the walkway in their distinctive Charlie Chaplin waddle.

These penguins in Jurong Bird Park are strutting their stuff not for fashion but for their health.

They are geriatric - at the wildlife park, birds that have reached 75 per cent of their expected lifespan are considered as such. This is roughly equivalent to retirement age in humans.

Humboldt penguins, for instance, are geriatric when they are 15 years old and above, as they have a reported lifespan of about 20 years under human care.

Keeping a close eye on them is Dr Ellen Rasidi. The veterinarian, 40, assesses the ageing penguins' gait for mobility issues due to arthritis, hip and joint problems, as well as other age-related ailments.

She is one of four veterinarians at the Jurong Bird Park Avian Hospital, which was set up in 2006. There are eight other staff, including nurses, keepers and technicians.

The facility is one of the most established wildlife hospitals specialising in avian care in the region, and its veterinary team conducts research projects that advance avian medicine and surgery; provides training to local and overseas veterinary professionals; and participates in international rescue and rehabilitation efforts with conservation partners for threatened bird species.

It ensures the health and well-being of a large patient base - the park's 3,500 birds across 400 species.

The team is also responsible for maintaining a regime of screening and vaccinations to prevent occurrences of zoonotic diseases such as avian influenza. It also conducts quarantine tests to ensure animals are free from disease before they join the collection.

Routine health checks, medical treatment and surgery are provided for the birds under the wildlife park's care, which includes its older residents.

The veterinary team works closely with the keepers to conduct more health checks and observations for the older birds.

"Like humans, animals face similar ageing health issues such as arthritis, muscle atrophy, vision and hearing loss as they get older. There are many changes that occur in the body during the ageing process. Some are normal changes, like the loss of fat or muscle mass, but some are diseases such as arthritis or cataracts. There is little information about these processes in many of our bird species, so often we might be managing cases which may not have been seen before," says Dr Rasidi, who is in charge of the park's geriatric programme.

The veterinary team also cares for birds from elsewhere as the hospital is one of the designated centres for rescued birds. The team treats and rehabilitates rescued native and migratory birds brought in by the authorities, partners like wildlife rescue group Animal Concerns Research and Education Society, and the public. Last year, about 400 such birds were admitted.

Dr Gabrina Goh, who is in charge of the rescued birds, says: "While some of the birds under our care have become used to human presence, they are still wild animals with instincts.

"Raptors have claws that kill rodents or even bigger prey species, and parrots have the ability to break nuts that humans use machines to break... I have been clawed, bitten and almost poked in the eye on occasion, but it is part and parcel of the job."

The 31-year-old junior veterinarian, whose father worked at the Singapore Zoo, said she grew up around people who loved animals and is fulfilling a calling.

"Many people are scared of birds, so they don't give them much of a chance but if people took the time to observe and appreciate them, they are amazing creatures and have unique personalities. There is a lot of satisfaction with working with wildlife, especially seeing birds come in sick or injured that would have otherwise probably died in the wild be treated and successfully released back into the wild," says Dr Goh.