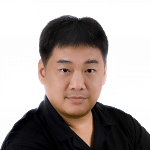 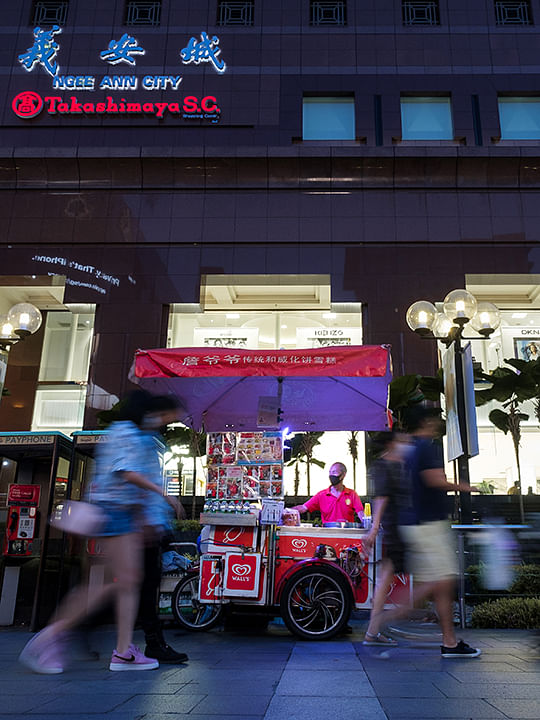 The sound of a bell ringing fills the air from below a Housing Board block where a motorcycle with a sidecar is parked. A man stands next to the sidecar under a bright red umbrella which shelters him from the blazing sun.

Mr Chieng Puay Chui, 73, who is more fondly known as Uncle Chieng, is peddling ice cream in Bukit Merah and the surrounding estates.

The grandfather of six has been selling ice cream for 56 years, 27 of which was spent parked outside Ngee Ann City in Orchard Road.

He is instantly recognisable among locals and tourists alike, always seen in a red polo tee, shorts and sandals. He has had pictures taken with Hong Kong actor Nicholas Tse and former Thai prime minister Thaksin Shinawatra.

Covid-19 made Mr Chieng leave his comfort zone and venture into HDB estates. During the phase two (heightened alert) restrictions, there were hardly any customers in Orchard Road.

"People were not allowed to eat outside. There was also no one in Orchard. So I decided to bring the ice cream to them."

The tighter restrictions in the community, which began in mid-May, meant that people were not allowed to eat out. The public was also asked to stay at home as far as possible.

"It is definitely more tiring travelling from place to place compared with being stationary in one spot", said Mr Chieng. "As long as I can sell ice cream, I will be happy."

The grandfather, who started selling ice cream when he was 16, was bored when he had to stay home last year during the circuit breaker.

Mr Chieng starts his day around noon and for five to six days a week he stops at about seven locations, spending about an hour at each one. He usually packs up to go home at 9pm.

After a few weeks, residents are familiar with his routine. There is more often than not a short queue, and some customers even bring their own containers to buy ice cream in large quantities.

Daily takings have increased slightly although Mr Chieng says he now earns only about half of what he used to.

Almost every afternoon, his wife, a retired machine operator, brings him tea for his break. She takes over the manning of the stall while her husband looks for a quiet place to rest.

In the middle of last month, as Mr Chieng was finishing up his baked muffin and teh-o kosong, he received a phone call from his supplier. Another ice-cream seller he knows had just been placed under quarantine.

Covid-19 is never far from Mr Chieng's mind. "Of course I am afraid. If I have to be quarantined, I also have no choice," he said.

As dining in resumed last month, Mr Chieng immediately headed back to his favourite spot in Orchard Road even though he was slightly injured. He was limping and walking slower than usual, as a result of an accident on a rainy day in the same month.

Recounting the incident, Mr Chieng said he and his wife were caught in the rain near Alexandra Road while they were travelling between housing estates.

His motorcycle would not start. As he tried to push the 300kg deadweight down a wet road, he slipped and fell. "It wasn't that bad. I still can walk," he said.

People did walk by the sidecar every evening but only a few regular customers spotted him and welcomed him back to the shopping district. They bought one or two bars of the old school ice-cream sandwiches - a crowd favourite.