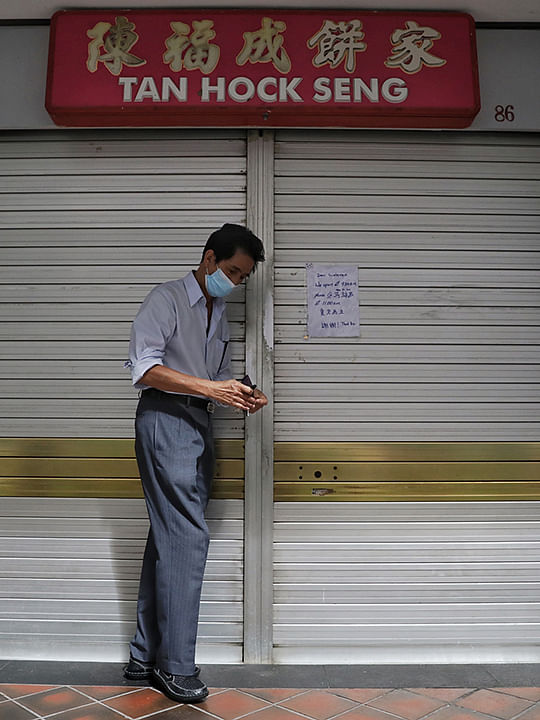 SINGAPORE - When Mr Tan Boon Chai shutters his 90-year-old bakery for the last time this month, the third-generation owner will step back from shouldering his family's legacy after 51 years.

But to the 71-year-old, Tan Hock Seng is more than just the Hokkien pastry business that his grandfather started in 1931, for it was at its original location in China Street that Mr Tan met Madam Yeo Ah Suei, his wife.

It was the late 1960s. Mr Tan was 19 and doing national service, while Madam Yeo was 16 and working part-time in the shop for six months.

"Sparks flew," said Mr Tan in Mandarin during an interview in early October (Oct 5) at the shop's current location in Telok Ayer Street. "It was love at first sight."

Even after more than 40 years of marriage, the couple still talk about their meeting fondly. Both also suggest the shop had a part to play.

A faded photograph of that old shop, dated with a marker pen, hangs in the Telok Ayer St shop.

"Marriage requires both to be committed and patient, these are skills that are honed over time," added Madam Yeo.

Committed and patient are the same words that one would use to describe Mr Tan's dedication to his craft, which he began picking up in earnest at the age of 20.

"Fresh from the army, it just seemed like the natural thing to do since I was helping out in the shop from a young age," he said.

Since then he has worked for five decades, only pausing for a day or two per year during Chinese New Year to take a breather.

Given how big a part of his life the shop has been, Mr Tan keeps a lot of old photos of the bakery.

"Others have time to go abroad during public holidays, but not me," said Mr Tan. "In this line I don't just bake for customers, I bake for the gods, so there's a responsibility to keep going."

Soon after, a customer placed an order that proved his point.

Kuehs for prayer are dotted with red dye, using a simple instrument of bamboo chopsticks held together by rubber bands. It is dipped in a dye-soaked sponge, and then used to mark the huat kueh.

"For prayer it's more presentable with the marking," she said.

Mr Tan's craftsmanship is evident in his response to a question about his recipe book.

"We have one, but what is the point? You learn how to bake by doing, not reading," he said.

Watching Mr Goh Soon Huat, a 55-year-old kitchen staff who has spent 37 years working for Tan Hock Seng bakery make beh teh saw (malt-filled pastry) and it is clear the process is now second nature to him.

They have bought some modern equipment but a lot about the shop has remained unchanged over the years. Look around the space in this 360-degree video and you will see the kitchen is cluttered. Only the Tans and their long-time employees know their way around.

Customers though swear by what comes out of it. A queue forms outside the shop when the morning's first batch of beh teh saw is ready for sale at 11am.

The snaking queues began in late September after a customer posted online that the bakery's closure was nearing, said Madam Yeo.

Customers were reminded to keep a one-metre apart in the queue as part of safe distancing measures.

Among those in the queue was Mr Peter Tan, a retiree, who had grown up eating pastries his parents brought home from the shop.

"I myself have been purchasing pastries from the shop for about 40 to 50 years," said the 80-year-old, who added that he was not aware of the coming closure.

"I can still buy tau sar piah (mung bean pastry) in Balestier but it won't be the same, I'm used to the taste of those here."

Others like Ms Mary Law, 69, made a deliberate trip down from her home in Tampines to get a final taste of what used to be an office snack for her.

"I worked in the area about 30 years ago, we would come down quite often to get pastries as it was convenient," said the receptionist.

Ms Ginny Gordon, a secretary in her 50s, and other customers interviewed in this video, had similar stories.

Ms SL Yeoh, a finance professional who hails from Penang, had high praise for the quality of Tan Hock Seng's bakes.

"Penang is also known for such pastries, but I feel none can compare with this," said Ms Yeoh, who declined to give her age.

"When you bite into the beh teh saw, it's not too sweet, it's fragrant, the texture is soft, it melts in your mouth," she said, adding that the pastries she used to bring home to Penang in bulk was a highlight for her family every Chinese New Year.

To allow as many to purchase beh teh saws as possible, a cap of 10 pieces per purchase was in place. But Mr Tan's pastries were so sought after that some rejoined the queue after making their first purchase.

Those who stayed the longest left after three rounds in the queue, 30 flaky pastries in hand.

Besides the popular beh teh saw, customers have also flocked to pick up traditional goodies such as soft peanut candy, sachima, cow ear cookies and huat kueh from Tan Hock Seng bakery on Nov 4, 2021.

Although the Covid-19 pandemic has affected business, Mr Tan insists it is not the reason for the shop's closure.

With the shop's lease coming to an end after being extended for a year and age catching up with him and his long-time employees, he said it was the right time to retire.

Some customers pleaded with Mr Tan to continue operating, saying it is a waste to let go of the longstanding business.

"Even if I continue it will only be for a few years, sooner or later I'll have to stop given my age," he said.

"I have no regrets, it's just a decision that has to be made at some point and I've decided for it to be now.

"Some have told me retirement will be testing, that it'll be difficult without a goal in life.

"Previously our goal was to come here, bake pastries and go home. Now I'll help take care of my grandchildren."

"It is just my grandfather's legacy," he said in a matter-of-fact tone, adding that recent media interest in the shop was overwhelming. "Frankly, I'd rather not have it."

But a quick scan around the shop said otherwise - old newspaper clippings and award certificates line the walls.

Another question on what heirlooms the shop holds prompted Mr Tan to break out of his apparent nonchalance.

"This ang ku kueh mould is at least 50 years old," he said. "You can see our name engraved on it - Tan Hock Seng."

He then proceeded to bring out a set of sugar moulds used to create figurines for temple prayers.

"Look, they come as a set of five - a phoenix, dragon, elephant, lion and a pagoda," he said.

"They are antiques, some have wanted to buy them but I refuse."

The last heirloom is seen by few, but one that Mr Tan passes under every morning after parking his car.

Above the shop's rear entrance - in an alley painted a deep red - hung an engraved wooden sign bearing the shop's name in Chinese characters.

"This belongs to my grandfather from the original shop, it's been around since I was born."

So precious is the signboard that it was among the first items from the shop to be removed for safekeeping with the impending closure.

Here, the wooden sign is seen hanging at their first shop that was in China Street and Mr Tan (second from left) chats with a customer together with his mother Madam Loh Kim Lian (extreme left), who passed away in 1997.

While Mr Tan did not rule out restarting the business after a break, especially if his children were keen on helping him with it, he said a potential buyer is waiting in the wings.

"Whatever happens, if I sell the shop, the buyer will have to retain our name Tan Hock Seng," said Mr Tan, who added that he will also mentor the buyer, imparting techniques needed for the pastries and confectionery in his repertoire, which number more than 50.

He estimates that the brand and recipes are worth a million dollars, but is open to negotiation.

"What matters is the heart and the passion of the buyer, perfecting skills takes time," said Mr Tan.

"I hope anyone who takes over doesn't change the recipes too much, it's the traditional tastes that we are known for."

Here, Mr Tan makes mian cha(savoury flour gruel) in the kitchen for the last time on Oct 3, 2021. According to Mr Tan, the entire process - from the preparation of ingredients to packing the eventual granule mix of wheat flour, ground sesame seed, ground fried shallot, sugar, sesame oil and vegetable oil which have been stirred in a heated wok and thoroughly sifted - takes about five hours. Mian cha is commonly consumed as a dessert paste by adding hot water to the granules.

After his lease was extended by a year last year, Mr Tan said in an interview with ST that he would work for as long as he can.

He certainly lived up to his promise, with passers-by pleasantly surprised that they could still get their hands on freshly-baked beh teh saws last Thursday (Nov 4), a day after what was to be the shop's last day.

Among them was housewife Seah Miew Siang, 48, and her daughters Anna, Alyssa and Audrey, aged 9 to 12.

Ms Seah said: "We know of the shop because my husband works in the area, but I thought they were closed so this is a surprise."

The family's pastry haul did not last for long, with the girls digging into the beh teh saws almost after they got them. But a picture they took with Mr Tan and Madam Yeo should last a lifetime.

The shop's lease will end on November 30, and Mr Tan said his ovens will likely be fired up one last time at the end of the week.

But it seems Mr Tan will not be out of the kitchen for long.

A handwritten sign in the shop, recently put up over the cashier's counter, said he will be selling kueh bangkit, love letters and green bean cookies for the coming Chinese New Year.

Details of the sale will be posted on Tan Hock Seng's Instagram page, managed by a family member.

Said Mr Tan: "I may be retiring but baking for the festive season is tradition, it's part of me."