After entertaining Singapore audiences for 39 years, the final curtain fell on the iconic Yangtze Cinema at the soon-to-be-demolished Pearls Centre last night.

Known for playing R21 movies - films restricted to viewers 21 years and older - the Chinatown cinema was forced to shut as the 23-storey Pearls Centre will be demolished so that the area can make way for the Thomson MRT line and be redeveloped.

Dank and musty, the two-hall, 425-seat cinema is known for playing raunchy titles from Japan, South Korea and Europe. 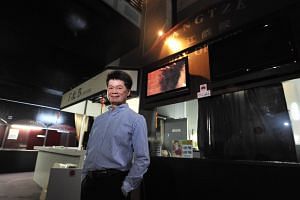 But the cinema did not always have a seedy reputation - during the 1970s and 1980s, it was a flourishing theatre that played family-friendly fare, such as popular Hong Kong flicks starring the likes of Andy Lau.

It was only in the mid-1990s that the cinema's owner, Mr Mono Chong, rebranded Yangtze as a R21-speciality cinema in the light of fierce competition from emerging modern multiplexes.

Although Mr Chong, 63, is sad to see the place close, he is in talks to source a new location to reopen Yangtze in the coming months.