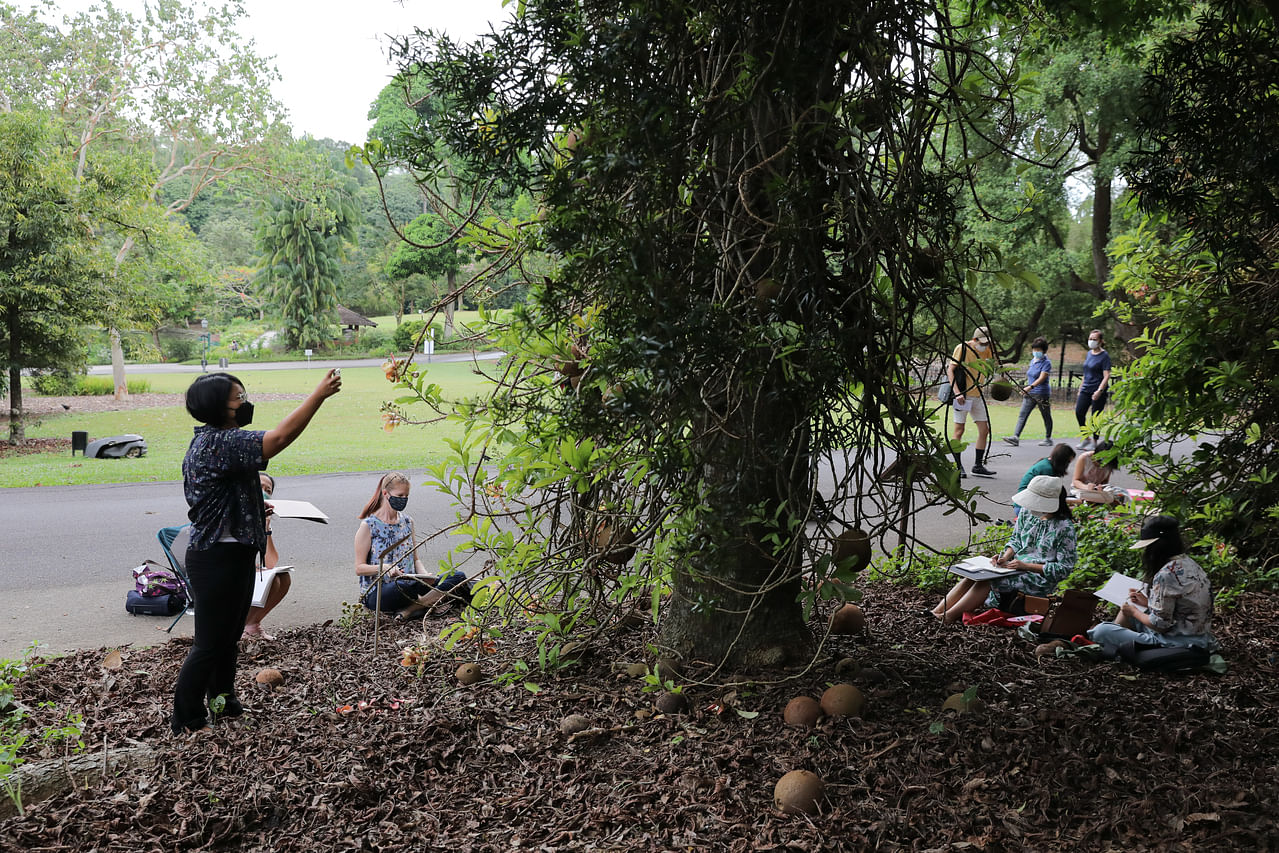 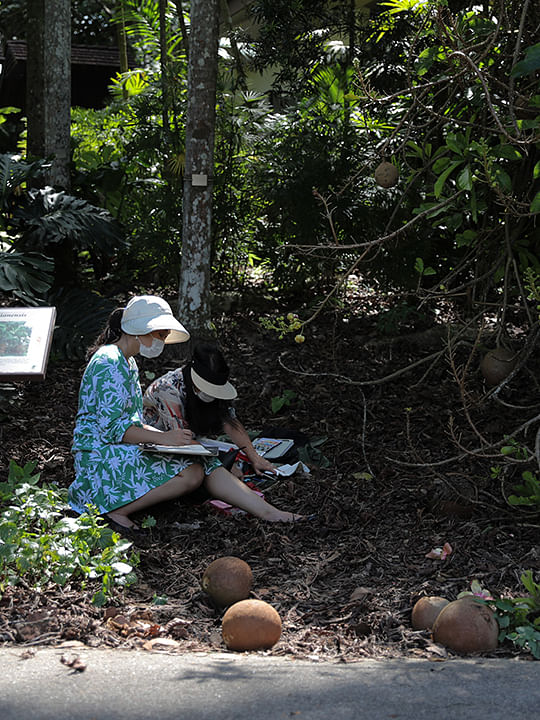 SINGAPORE - A group sits around two cannonball trees - so named because they bear fruit that resembles cannon balls - with sun hats and safari chairs, looking ready for a picnic.

But no food is in sight after they unfold their groundsheets and empty their tote bags.

Instead, nine members of the Botanical Art Society (Singapore) take out watercolour palettes, writing instruments and other types of stationery.

One of them, artist Madeleine Vinuya, 38, uses a pigment liner for her sketch.

"Botanical art is the coming together of art and science," says Ms Carrie-Ann Lee, president of the society that was formed in June 2019. "When there was no photography, botanists used to travel the world with artists, who would document samples on their journeys - that's how botanical art came about."

"Today it is done in a more leisurely manner," adds Ms Lee, 47, who works in marketing.

Their works may be for pleasure, but the group's artists and enthusiasts make no compromise on the one quality that distinguishes their craft from other floral paintings - accuracy.

"Botanical art needs to be very botanically accurate in terms of colour, size, proportion, and the various parts of the plant," says founding member Sunanda Widel, who is in her 60s.

Most whip out rulers or dividers. With an outstretched arm, they hold the tool between their eye and the object they are about to document. With one eye closed, scientific botanical illustrator Loh Xiang Yun uses a divider to capture proportions of a cannon ball tree fruit.

Other tools like scalpels are brought along but unnecessary on this occasion, says Ms Loh.

She uses them for commissioned works, which sometimes involve dissecting plants, observing them under a microscope and drawing them for scientific journals.

She is seen here with a pen and ink illustration of Dioscorea tenuifolia Ridl., commissioned by the Singapore Botanic Gardens. The plant is native to Singapore and was previously recorded as extinct but was rediscovered and assessed as vulnerable.

Besides bringing like-minded enthusiasts together, the group aims to promote interest in botanical art and greater understanding of what it is.

Their Friday morning meet-up is just like their meetings in pre-Covid-19 times - almost. For this article and the short video feature at the end of it, the group of nine people has been issued a filming permit by the National Parks Board. Members have to keep within Covid-19 guidelines, which allows for masks to be removed only for photography.

Curious passers-by look on, some stopping to observe as the members go about their sketches.

Among the onlookers are football coach Rosman Senin and his four-year-old daughter, Hanna Safiya.

He says he brought Hanna to the gardens to draw, and was pleasantly surprised to find others doing the same.

The 42-year-old points at the members, coaxing his daughter to sit down and join them but she is hesitant.

After some deliberation, Hanna gives in, and the father-daughter duo begin to put graphite to paper.

"I want to teach her to slow down more," says Mr Rosman. "Life is too fast-paced and we don't often set aside time to sit down and focus on something."

He tries his hand at sketching part of the cannon ball tree, but Hanna has other ideas - she draws her mother with her, standing in the rain.

"I didn't know this group was going to be here but what they are doing is great, we are lacking an art culture in Singapore," says Mr Rosman.

Ms Lee says the society comprises members of diverse backgrounds. In the group of nine are a lawyer, a scientist and an engineer.

Scientist Franck Ernult says he enjoys the mix of art and science in botanical art because it requires one to accurately represent the plant, but also allows for artistic sense to make sure the completed work is beautiful.

Away from the rest of the group, the 45-year-old and Ms Widel have a conversation as they draw.

More than a hobby

For some in the group, botanical art is more than a hobby.

The 43-year-old was diagnosed with carpal tunnel syndrome in 2013.

"I couldn't use my hands anymore, I couldn't even hold chopsticks without them going numb," said the freelance visual artist and swimming coach.

She did not regain full mobility in her hands even after surgery.

"It really helped to stabilise my hands."

Having read botany as an undergraduate and art for a master's degree, it is no surprise that botanical art became her go-to art form.

She adds that the meet-up is a relief from the stress of the pandemic.

"When you can still do art for yourself or for leisure, it means that we can still cope," says Ms Teo.

For Ms Melissa Tang, a lawyer, botanical art is an escape from the rat race and a chance to be successful outside of work, on her own terms.

"We chase success in our art, but in a different manner than from work," says the 42-year-old.

"As I learn to draw and improve there is satisfaction that doesn't depend on what others think, it's for myself."

It is obvious that members enjoy not just drawing nature, but being intimately close with it.

Seated in a pool of dried leaves, Ms Vinuya is oblivious to two insects crawling on her leg, as she continues stippling - using small dots to create an image.

Even members who prefer not to be outdoors have something to look forward to. The society regularly conducts workshops where members can pick up new skills and techniques.

Some are run by the society's members like Ms Widel, who conducted this colour mixing and swatching workshop for both members and non-members last month.

"If you love plants and if you love painting or drawing, our society will help you from the very basics, we have members at all skill levels," says Ms Widel, a fellow of the United Kingdom-based Society of Botanical Artists.

Her drawings often include little notes indicating the name of the plants and where she saw them. Next to her drawing of the spiral ginger, she writes "growing in a very large clump in a shaded, forested, hillside in moist, sandy loam soil.

"It's wonderfully enjoyable, brings us out into nature - you get to enjoy sunshine, fresh air, birds, cicadas - it's really a great pleasure."