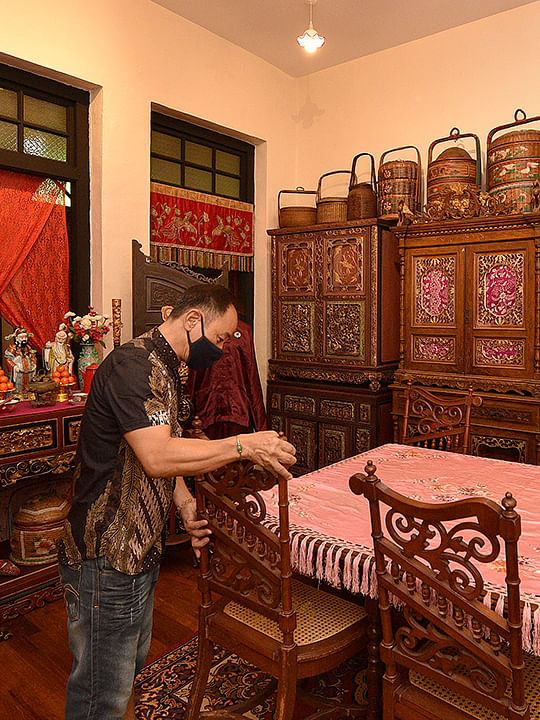 Katong, home to some good Peranakan eating places, is also where the Katong Antique House can be found.

The private museum, in a two-storey shophouse in the area, is home to 100 years of Peranakan history, with antiques that date back to the 1800s.

The artefacts are so loved by visitors that some would fly to Singapore to ask if they could buy them.

Ms Angeline Kong, 54, a volunteer who also helps to run the museum, said: "Many people have asked us if we are selling the things here... but no, we are not selling anything at this moment because the intention is to pass on the culture and be able to share their stories, which is uncle Peter's wish."

Uncle Peter is the late Peter Wee, a fourth-generation Peranakan who founded the museum.

He was passionate about keeping Peranakan heritage and culture alive among the younger generations. Peranakans are the descendants of immigrant traders who married local women, and settled in the British-controlled Straits Settlements of Singapore, Penang and Malacca, as well as Indonesia and Phuket.

Its halls are filled with heirlooms and artefacts that include intricately beaded slippers, colourful enamel tiffin carriers, and ornate cabinets and chairs.

Mr Wee, a descendant of philanthropist Tan Keong Saik, inherited the East Coast Road shophouse from his maternal grandfather in 1966 and turned it into Katong Antique House in 1979.

The museum's new guardians are Mr Eric Ang, 60, Mr Wee's former assistant, and Ms Kong, who was a close friend of Mr Wee's.

Both share the late founder's goal of keeping the stories and memories of Peranakan culture alive, so they maintain the private museum and run tours by appointment. Admission is $15.

Ms Kong says: "Friends came, visitors came, until Covid-19 came. We took the opportunity to renovate the place, which has not been renovated for almost 40 years."

They redid the wiring and lighting, resurfaced the walls, and reorganised the museum so it is more accessible for the public.

Mr Ang cleaned up the museum and sorted out some pieces in Mr Wee's collection that were previously kept in cupboards, so they can be displayed to the public.

The museum reopened in May after nine months of renovation.

Ms Kong, who is a Peranakan, says of the mission: "We want to keep the legacy alive."