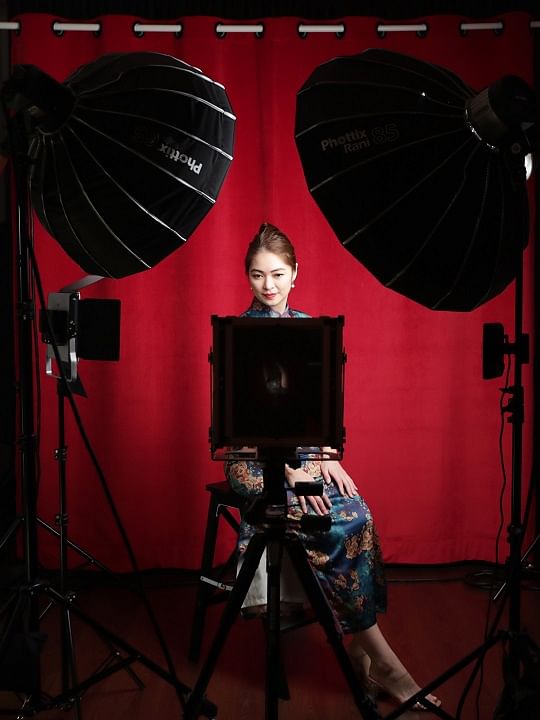 The instant gratification from shooting dozens of digital photographs is not his cup of tea - instead, his preferred medium is wet plate photography, an arcane process that predates even threading rolls of film into a camera.

While it is about as old-fashioned as anything can get in the digital age, it reminds Mr Lee of family, childhood and longstanding traditions.

Going to a studio for family portraits was a highly anticipated event when he was a child. His late mother would carefully select the outfits and pick out the "cheesiest" props and backdrops.

When Mr Lee was getting married in 2013, he wanted wedding photos taken on film, like those of his grandparents, parents and relatives stored in family albums.

But time had moved on and he could not find a studio here or in Malaysia that took such photos.

He eventually shot the photos himself, and the process bred an idea.

"I thought that one day if I got the chance, I would start my own analogue photo studio," says Mr Lee, 39.

He founded Hip Xiong Photo Studio in Geylang last year, after spending more than a decade in creative roles in various companies.

The studio, whose name is a nod to the Hokkien term for taking a photo, specialises in wet plate photography, a technique invented in 1851.

This involves a chemical process that turns a metal plate into a film-like medium that can capture an image.

The procedure - which can be observed by customers in a darkroom - is quick, and produces a rustic, blackened plate that can last centuries.

Witnessing this alchemy is part of the experience.

SPH Brightcove Video
With a fascination with photographs shot in the studio, Ryan Lee set up Hip Xiong Photo Studio and grew interested in wet plate photography when he realised that not many knew of this old form of taking photos.

Mr Lee was thrilled a year or so ago when he produced his first wet plate photo, a self-portrait.

"When the image appeared, and it was well exposed and in focus, I was so blown away.

I felt this excitement, and I really wanted people to experience that."

Besides portrait sessions, he also runs workshops where participants take part in the shooting and developing process.

Ms Fairli Poh, a customer, says the appeal of wet plate photography lies in its timeless nature and unique process.

"When I saw my image appear on the plate, it was amazing," says Ms Poh, 30, who runs home-based business Su Nougat. "Initially, it is just a metal plate, and then you slowly see the outline and the photo. It's like magic."

Mr Lee, whose wife Jessica Koon is self-employed in the visual merchandising industry, feels that by his keeping wet plate photography alive, one more generation can get to experience what he did while growing up.

The father of three sons, aged six months to five years, says: "Hopefully, this technique will be sustained and my kids will get a chance to take pictures in the studio as well."