ST Scroll Back takes an unusually close look at the usual: Today, it’s about Grinch-like Christmas conversations, such as the trouble with ‘Xmas’

Do you have a Grinch coming over to steal your party’s cheese and spirits?

Or are you meeting up for drinks with a warrior fighting against a “war on Christmas”?

(Maybe neither, since you could be enjoying the festivities the happy loner way.)

We’re Curious about whether what they say ruins Christmas or livens up the chat.

From “Christmas isn’t in December” to “The word ‘Xmas’ isn’t respectful”, these subjects can be conversation enders if guests turn into rage machines when they’ve guzzled too much mulled wine.

Should such subjects be taboo? I think they can be conversation starters if everyone keeps the mood merry and bright.

Come on in. Pick up a fork (or pitchfork), help yourself to an hors d’oeuvre, and join in the conversation.

Careful how you text your invitation to a Christmas warrior. Type “Xmas” and he may text back in all caps that it is a lazy, disrespectful and newfangled abbreviation of “Christmas”.

In the United States and other countries, anger about the religious day being allegedly attacked partly focuses on how the use of “Xmas” makes the religious season seem more secular.

Not so fast. Experts say the symbol X, representing the Greek letter “chi” of Khristos or “Christ”, was claimed by early Christians as their own. Before “Xmas”, there was “XPmas”, according to assistant editor of etymology at Oxford English Dictionaries Inge Milfull. She found references in the Anglo Saxon Chronicle as far back as 1021, and says the P was probably dropped later.

��I think secularists are trying to do this, to take Christ out of the Christmas.”

- Evangelist preacher Franklin Graham speaking to CNN about those who use ‘Xmas’.

- Mr Bill Purdue, an Open University historian and author of The Making Of The Modern Christmas, speaking to BBC.

GRINCH CONVERSATION NO. 2:
SANTA HAD A BROKEN NOSE?

Spoiler alert. Cover the eyes of children and the young-at-heart who want to believe���

The remains of the real Santa - St Nicholas, the Greek bishop who lived in the third and fourth centuries - are in Italy. National Geographic said when the Basilica San Nicola crypt was repaired in the 1950s, his skull and bones were carefully documented. The data was used in modern software simulations put a face on the saint. 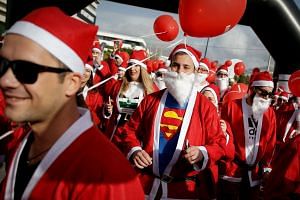 He probably had a broken nose, olive-toned skin, brown eyes, and grey hair. One view of his appearance is seen via forensic facial reconstruction in a BBC project entitled The Real Face Of Santa.

What hadn’t changed over the years was that people thought he was kind. If you want to believe in something, believe in Santa’s kindness.

Oh, another thing to ruin Christmas: Santa died again in 2014.

Mr John Moore’s giant beard, big eyes, and long white hair shaped public perception of what Santa looked like as he appeared time and again in Coca-Cola’s holiday advertisements for years. He died of cancer at the age of 86, but his friendly image will live on.

GRINCH CONVERSATION NO. 3:
WHAT DO YOU MEAN, NOT IN DECEMBER?

Adam Ruins Everything - The Raucous, Pagan Origins of Christmas

Before you cut into that log cake, before you gather around that tree, can you tell how these traditions came about? Hold your horses and reindeer, Jesus may not have been born in December? Adam Ruins Everything on the pagan origins of Christmas.

22
Number of years Christmas was banned by Christians on what would later become US soil. In 1659, the Puritan lawmakers of the Massachusetts Bay Colony followed the example of their brethren in England by outlawing the observance of Christmas (and other “superstitious” holidays). The Puritans found feasting, gift-giving, and wishing one another a merry Christmas ungodly and sinful.

$4.1 million
Value of  sales the owner of a UK toy shop chain faces losing after deciding to close his stores on Christmas Eve this year. Mr Gary Grant, boss of The Entertainer, is giving 1,700 workers at his 149 shops a day off because it falls on a Sunday. This wonderful move ruins Christmas only for last-minute toy shoppers, but makes it great for his employees who can spend time with loved ones. He said: “As a Christian, I believe in families.”

GRINCH CONVERSATION NO. 5:
SOMEONE RENAMED CHRISTMAS... OR DID THEY?

Once upon an inclusive time, a British city council ditched “Christmas” and called it “Winterval” in a bit of political correctness gone mad... except it didn’t do so.

This podcast episode by The Allusionist explores how the urban myth persisted for years, with the word “Winterval” used in Britain as shorthand for the war on Christmas.

GRINCH CONVERSATION NO. 6:
NO KISSING, PLEASE

Little Jimmy Boyd’s song, I Saw Mommy Kissing Santa Claus - in which a young boy catches his mother smooching his Santa-costumed father - may sound innocent and wholesome to us. But Boston church leaders tried to get the song banned as they objected to the suggestion of physical intimacy. Boyd, who was 13 when he recorded the 1952 song, met with church leaders and convinced them that the song was okay.

It’s a religious-friendly greeting at its root; “holiday” stems from the Old English for “holy day”, but some see saying “happy holidays” as a push against Christmas. Whatever your preference is, we’re sure your wishes are happy and warm.

How would you greet someone during the Christmas holiday?