Singaporean actress Ase Wang had dinner with film executive Harvey Weinstein, but declined to continue to party with him in a suite

Actress Ase Wang says men such as disgraced Hollywood studio head Harvey Weinstein are "just the tip of the iceberg".

Her own brush with Weinstein happened when she and a few other actresses were invited to dinner with the powerful film executive during his visit to Thailand.

But it was another encounter with a Hollywood player that had real consequences for the career of the 35-year-old Singaporean.

Some years ago - she declines to tell The Straits Times the date or location, except to say that it happened in Asia - a team from Los Angeles came to the region to cast a movie.

"He had the capacity to make your career," she says of the director.

Despite the presence of her manager, a woman, in the room, he asked her what kind of men she preferred to date, then propositioned her by saying that she "should try white guys".

She did not respond to what was clearly an advance and was not picked for the movie.

She is angry at how she was viewed as not much more than a sex object.

"At that point, all the practice you put into the script has gone to sh**. All that work, crushed in two seconds," says Wang, a graduate of the Lee Strasberg Theatre & Film Institute of New York.

She was also a judge on reality television show Supermodelme (2014).

The Weinstein scandal continues to rock the industry after an expose in The New York Times published earlier this month detailed three decades of his alleged sexual misconduct.

More than 30 actresses, including Angelina Jolie, Gwyneth Paltrow, Daryl Hannah, Rose McGowan and Annabella Sciorra, have accused him of assault and rape.

Weinstein has been sacked from The Weinstein Company, which he founded, and the police in Los Angeles, New York and London have opened investigations on him.

In 2010, Wang and a handful of others were invited to dinner with the movie mogul when he was in Thailand on a business trip.

"Within five minutes, I knew I made a mistake. He was loud and obnoxious. He knows he has a lot of power and it is obvious by the way he talks to people," she says. 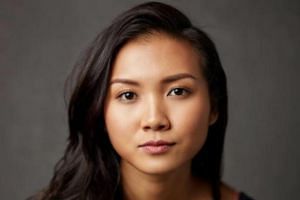 She thought the dinner would give her the chance to rub shoulders with the best in the business, but felt insulted by how she and the other actresses at the table were treated as not much more than "a meat show" for the boss.

She declined an offer to continue the party with Weinstein in an upstairs suite.

Men such as Weinstein, who treat women as disposable objects, are rampant, says Wang, who is due to appear in upcoming Toggle show Intercept.

"Along with the glitz and the glamour, there's a lot of bad... There are plenty of Harveys out there and it's all coming out now," she says.