On a hot night last July, I walked into a bar appropriately named Loves Me Not, expecting my first date not to show up.

We'd made plans to meet here more than a week prior, but when I opened dating app Hinge earlier that day to confirm, our conversation was missing.

Though grabbing a drink with Andrew was on my calendar, my list of matches no longer included anyone by that name.

Had he unmatched me as a way of cancelling? Or was it some kind of technical goof and he was still planning to show up?

Or had I simply imagined those plans, like a mirage in a wasteland where follow-through and basic human decency are scarce?

In such a climate, it's easy to get thirsty. I had no idea. In today's dating culture of extreme flakiness, people "ghost" at any and all points: Right after you've matched on an app, after a few texts are exchanged, after a few dates, even after months or years of dating.

Though it was plausible that someone would make specific plans and then cancel without actually cancelling, I'd never experienced this particular disappearing act, where someone actively makes plans and then cuts off all methods of communication. 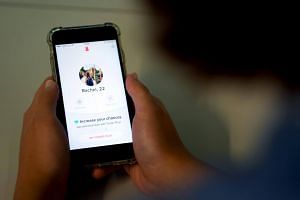 Dating apps: Paradox of choice or the way to meet Mr Right?

Andrew did not walk through the doors of Loves Me Not that night. I ordered a pizza and dirty martini anyway and savoured them while wondering what to call this particularly confusing experience.

Nearly a year later, I have an answer. Ms Rachel Thompson, a single woman in London, coined the term "cloaking" to describe it.

"Cloaking is when a person doesn't just stand you up for a date, they also block you on any app that you've previously communicated on," she describes in a video for digital media website Mashable.

It's as if your date is donning a Harry Potter invisibility cloak. Not showing up would be ghosting. But cloaking involves taking steps to hide yourself even more - leaving someone no way of contacting you. (Simply unmatching on a dating app qualifies.)

"It's a really humiliating thing to go through," Ms Thompson said in her video. "But it's also a really common thing."

She's been through it herself. She also met a guy on Hinge. They hit it off, exchanging flirty messages about their shared love of pasta and burrata - and making plans to go for Italian later that night.

But once she sent him a WhatsApp message to say she was on her way, he didn't respond. She didn't even get the standard read receipt WhatsApp usually sends.

When she clicked over to Hinge, their conversation was gone. She tried sending him an iMessage. No response.

I'd been through a similar period of silence and confusion with Andrew.

We'd made plans, but hadn't exchanged phone numbers, so I couldn't text him. I had his first and last name, so the day our date was supposed to happen, I sent a Facebook message to see if we were still on. No response.

At this point, just a few hours before our supposed date, I probably should have made other plans for the evening. But even though most people on dating apps seem to be total flakes, I am not. I would show up just in case he did too.

Ms Thompson also stuck around for a drink just in case her date showed up. Eventually, she gave up and joined her friends for Chinese food instead.

She didn't want this person to get away with his bad dating etiquette.

"While I was putting highlighter on my face and getting excited for the date, he was busy blocking me on every single app. I was so frustrated because, obviously, I wanted to say something and just be like, 'That is not cool. Like, what are you doing?'"

But with no way of contacting him, she couldn't even do that. Instead, she created a word for this weird, humiliating experience.

After she took to Twitter, she found out many people have been cloaked too.

"I feel like having a word for it helps to unite people and helps validate those experiences," she said.

It sure does. And like her, I found a way to salvage the evening.

After finishing my pizza and martini, I walked to my new favourite ice cream shop and picked up several pints - one for myself, another for my friend who was having a miscarriage that day and a third for friends who were adjusting to life with a newborn.

• Lisa Bonos is a writer and editor for Solo-ish, a Washington Post blog about single life.

A version of this article appeared in the print edition of The Sunday Times on May 19, 2019, with the headline 'When a date goes beyond ghosting and 'cloaks' himself'. Subscribe
Topics:
More
Whatsapp Linkedin FB Messenger Telegram Reddit WeChat Pinterest Print Purchase Article Copy permalink