Sim Ann: The art of tidying up runs in the family

Ms Sim Ann, 44, used to dread a childhood chore that was part of her “domestic goddess” mother’s routine.

Married to retired university lecturer Sim Hock Kee, 79, Madam Choo would scold Ms Sim and her younger brother and sister if they did not pull their weight.

Ms Sim, Senior Minister of State, Ministry of Communications and Information, and Ministry of Culture, Community and Youth, says: “I used to think, ‘So what if the house is a bit messy? We can live with it, why can’t mum?’ I told myself that I would never do that to my kids and go into cleaning frenzies.”

But Ms Sim, an MP for Holland-Bukit Timah GRC, changed her tune when she grew up.

“I found it’s pretty hard to stomach a messy house. Sometimes, I see my children pulling long faces when I mobilise my own clean-up operations,” says Ms Sim, who is married to hospital administrator Mok Ying Jang, 51.

The couple have two sons, aged 15 and seven, and a 12-year-old daughter.

Ms Sim says her mum values family relationships because of her own difficult childhood. 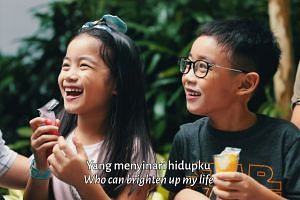 Time for mums to cut themselves some slack

Between the ages of three and 13, Madam Choo, her elder brother and their parents were banished from Singapore to China, where the children were separated from their parents for some time.

Madam Choo’s father was viewed by the colonial authorities as a leftwing activist. He died in his late 40s after a brief stint in a labour camp near the Siberian border.

Now, Ms Sim, her siblings and their families spend several hours every weekend with their parents.

“My mum is the focal point of the family and she shaped our views (on spending time together),” she says.

Mother and daughter also have a shared understanding of the pressures faced by working mums.

Ms Sim says: “When I was a young adult, I met some of my mum’s former colleagues, who told me how my siblings and I were always on my mother’s mind. She would berate herself if she missed the start of the school holidays and hadn’t taken leave to spend time with us.

“I hadn’t known that. Some things about your parents, you find out only later, through other people.”

Madam Yong Yuit Ngoh, a 67-year-old housewife, was Ms Tin’s main caregiver, confidante and constant companion when she was growing up.

Madam Yong is married to Mr Tin Chew Hong, 72, a retiree who used to run a coffee shop. Ms Tin is their only child.

Ms Tin, a mother of two, says she has learnt, among many other things, “the importance of education and the need to be socially mobile” from the family stories her mother told her.

“It’s useful to understand the environment in which my mum grew up, which helped me appreciate what I have, and why she was doing what she did, for my education,” says Ms Tin.

Madam Yong’s father died when she was a baby and her mother, a construction worker, raised Madam Yong and her three older brothers alone.

Resources were scarce: Madam Yong’s mother used to pick up vegetables dropped by others at the market.

Although Madam Yong does not speak English, she ensured that Ms Tin kept on top of her school work and made her write English notes repeatedly in a jotter book as a child. Even in pre-school, she was concerned when she realised that Ms Tin did not understand the teacher’s instruction to queue up.

Ms Tin is similarly mindful of the value of education and languages for her children, though she says she is more “perfectionistic” than her mother.

“The differences are also generational. My mum was more worried about my English, while I’m more concerned about my son’s Chinese.”

Ms Tin is the chief executive of Business China, a non-profit organisation spearheaded by the Singapore Government and the Singapore Chinese Chamber of Commerce and Industry.

She has taught her elder son to recite poems from the Tang dynasty since he was two years old. The poems have themes such as filial piety and resilience, values that she hopes to impart to her offspring.

Rahayu Mahzam: Getting a head start, with mum’s help

When it comes to her attitude towards early childhood education, Ms Rahayu Mahzam, 39, an associate director at a law firm, says she is largely influenced by her mum.

The MP for Jurong GRC recalls how her mother scrimped and saved to send her and her two younger siblings to a good kindergarten.

“It gave me a boost, I feel, in terms of having exposure to subjects like music and dance,” says Ms Rahayu, who is married to a 42-year-old deputy public prosecutor.

She enrolled her only child, two-year- old Muhamad Ayden Muhamad Imaduddien, who has Down syndrome, in early intervention classes when he was four months old.

Ms Rahayu says: “I think I’ll never stop being dependent on my mother, who is raising my child. Maybe it’s part of our family culture. My grandmother took care of us as well.”

“She was a dancer who actually learnt to dance under Mrs Bhaskar,” says the 39-year-old dancer, referring to Mrs Santha Bhaskar, wife of Mr K.P. Bhaskar, who founded the Indian performing arts school Bhaskar’s Arts Academy.

“She taught my younger sister and me how to dance when we were young and later sent us to the school to learn it as well. She was always there for our classes and almost all of our performances.

“She would even write the moves on paper for us to practise.”

Mrs Gayathri’s mother died in 2017, after years of being bedridden following a major stroke in 2011.

Mrs Gayathri’s son is nine and learns the classical Indian drums while her daughter, seven, is learning to dance. Both are at the Bhaskar’s Arts Academy.

“Because of her, I’ve aspired to be more involved in my children’s activities and their learning process.

“I want to invite my children into the arts. I hope that they will love it and learn to appreciate the discipline it takes to be good at an instrument or a form of dance.

“I admired my mother’s passion for dance. She never got her chance to do her Arangetram (the solo debut performance for a student of Indian dance) because of financial constraints.

“I think because she never got to complete her dream, she always encouraged us to pursue our passions and what we love.”

Joan Pereira: ‘We discipline, but with very different styles’

When parliamentarian Joan Pereira, 51, was about 18 years old, she went to a home disco and broke her mother’s 10.30pm curfew.

The MP for Tanjong Pagar GRC recalls getting home at around midnight and opening the door to a big scolding from her mother, retired secretary Florence Tan Siok Cheng, 79. They did not speak for several days.

The director at philanthropic organisation Temasek Foundation Cares says that while her mum and her both inculcate similar values such as honesty and respect for the elderly in their children, their disciplinary styles are very different.

Ms Pereira has two daughters aged 23 and 20, and when the elder daughter was in polytechnic, she, too, broke her curfew, coming back at 2am instead of midnight.

Although the MP conveyed her displeasure, talking to the girl about responsibility and staying safe, there was “a lot more dialogue”, says Ms Pereira, whose 54-year-old husband works in the shipping industry.

“My mother’s parenting style was acceptable for her generation but would not go down well with my children’s generation. They don’t want you to judge them; they want to know that you are on their side.”

Entrepreneur Norfasarie M. Yahya confides in her mother all the time.

“She was a housewife so she was always with us,” says Ms Norfasarie, the eldest of three children.

The 35-year-old, who runs a spa, beauty salon and a mother-daughter shoe label, says her mother Zaliha Rawi, 56, “placed emphasis on being open and honest – she wants to know what is going on with us, whether it’s good or bad”.

"So whenever anything happened, I would share with her. Even till now, although we do not live together anymore, not a day goes by without us talking on the phone.”

Ms Norfasarie is married to national footballer Baihakki Khaizan and has three children – sons Mika and Muaz, 10 and three respectively, as well as daughter Moza, eight.

She aspires to be the kind of friend her mother was to her children: “I run my own business so sometimes my time is very tight, but I make it a point to ferry my children to and from school.

“It is a precious time for me to bond with them, ask them how their day is going and how school went. I listen to their stories and I tell them the same thing my mother told me – that they can come to me for anything.”

Chen Xiuhuan: Passing on the value of perseverance

Local actress Chen Xiuhuan grew up with a disciplinarian of a mother. Her mother, Madam Lim Geok Kee, now 77, was “very strict” to her six children. Chen is her second youngest.

“When she got angry at us, she would tell us exactly what we did wrong. So when I became a mother, that’s what I learnt as well – I always told my kids why they were being disciplined,” says the 53-year-old mother of three, who is married to a businessman.

Chen has three daughters – Shanisse, 21, Shalynn, 18, and Shavinne, 15. She instils in them the values of perseverance and family that her mother practises.

“My mother was a very perseverant woman. She ran a provision shop every day and still had to wash clothes and take care of us. But she was also a family woman – she doted on us and loved us very much.

“It’s something I’ve passed on to my daughters. I tell them they have to work hard and persevere, and that family is a priority.”

And unlike typical Asian families, Chen is committed to showing love for her children, much like her mother did.

“My mother and I are very close. We still hold hands when we go out and we kiss goodbye too. I do the same for all my children.”

Professor Lim Sun Sun, 46, learnt “not to be wasteful” from her 78-year-old mother, a housewife and seamstress.

The head of humanities, arts and social sciences at Singapore University of Technology and Design, who is also a Nominated MP, saw how her mother, Madam Chew Geok Toy, used scraps of fabric to sew different outfits for Prof Lim and her three older siblings.

Even today, Madam Chew, who is married to an 80-year-old retired book-keeper, swims five times a week with a swimsuit she sewed herself.

Prof Lim is married to a 49-year-old law professor and the couple have a 15-year-old daughter and a 12-year-old son.

She has imparted similar values of thrift and frugality to her children, which also extend to conserving environmental resources.

Her son, for example, is the first to switch off lights that she has left on, she says.

A version of this article appeared in the print edition of The Sunday Times on May 12, 2019, with the headline 'What I learnt about parenting from my mum'. Subscribe
Topics:
More
Whatsapp Linkedin FB Messenger Telegram Reddit WeChat Pinterest Print Copy permalink