Happiness is not a laughing matter, at least not in Bhutan.

Happiness is serious business for the people there. It is so serious, they have even established a Gross National Happiness (GNH) Commission, which ensures that everything the country does contributes to the overall well-being and happiness of its people.

The pursuit of GNH is enshrined in the country's Constitution, and when you ask Bhutanese if they arereally happy, most would say yes.

Having lived and worked in Bhutan for almost a year now, what I have learnt about happiness is that it is not an end goal. It is the journey and mindful pursuit of happiness that leads to fulfilment in one's life, and contributes to a peace of mind.

Here are some lessons on happiness I have learnt during my time here.

MONEY DOES NOT EQUATE TO HAPPINESS

Analytics and advisory company Gallup ranked Bhutan 97th in its 2018 World Happiness Report. The happiest countries in the world, according to the report, happened to be some of the richest ones too, such as Finland, Norway, and Denmark.

But becoming a wealthy nation is not the ultimate pursuit of Bhutan. In the 1970s, the fourth king of Bhutan, Jigme Singye Wangchuck, famously said that "Gross National Happiness is more important than gross domestic product". And with that, the Bhutanese started pursuing this national goal.

Bhutan is careful in the steps it takes to development. Decisions and policies must adhere to GNH guidelines of cultural preservation, protection of the environment, good governance and sustainable socio-economic development.

Studies have shown that money does not make one happy.

Here, the average monthly salary of an employee in the government sector ranges from $400 to $600. After deducting financial commitments such as rent, there is barely enough left to save.

Yet the Bhutanese trudge on, content and grateful for everything they have. Perhaps it is also due to the Buddhist mindset of living in the present that the Bhutanese live their life a day at a time - despite the lack of financial security - and with a lot of gratitude for their kings, their work, the beauty of their country and their family.

HAPPINESS IS NOT ABOUT HAVING A PROFITABLE BUSINESS

In Bhutan, there are many small businesses that have been set up to empower or assist the marginalised. Rather than falling to the two extremes of purely profit-driven businesses and non-governmental organisations, local businesses have sought to set up social enterprises, giving back to society and the environment.

They are contributing to many areas, from waste management to rural development to empowering women.

These initiatives show that the Bhutanese are not intent on making a profit, but rather to help their fellow citizens. An example is Nazhoen Pelri Eco-Friendly Initiative, Bhutan's first waste paper-recycling unit that produces on average 20,000 egg trays a week from waste materials and employs recovering drug-dependent youth to reintegrate them into society.

Another is MAD Bhutan, a Singapore-based tour operator that channels its profits to benefit the rural school children in Bhutan.

HAPPINESS IS ABOUT BELONGING TO A COMMUNITY

At about 735,000 people, the entire country is the combination of three mature estates in Singapore. What this translates to is a tight-knit community where everyone knows one another. Someone is always somebody's cousin, in-law, relative or work associate.

A small community helps to foster kinship and harmony, unlike populations that live in large, globalised cities. A lot of time in Bhutan is spent on kindling those relationships, and cousins are usually hanging around with one another, over a beer or a cup of buttered tea huddled around the bukhari (local wood-fire stove used as a heater), or playing sports such as archery, darts and football.

Neighbours know one another and stop to chat in the middle of the road, relatives are always available when you need them to help with family rituals and, if you need help in procuring a nice silk kira (traditional costume for women), there is someone who knows a weaver somewhere. With a close community like this, help is always there when you need it.

HAPPINESS IS ABOUT BEING KIND AND HAVING COMPASSION

Compassion is an integral trait of the Bhutanese and you can witness it in the way they treat animals, specifically the multitude of stray dogs here.

Stray dogs roam the streets in droves - along the roads, napping at your doorstep and even entering shops at times - but you will rarely see a Bhutanese chasing a dog away or hitting it. These animals have become such an essential part of the daily lives of people living here that some locals feed the dogs on a regular basis.

The Bhutanese love to do picnics and leftovers are always given to the dogs. I have been told that "it's better to feed the dogs than to waste the food". Now, that is good food waste management.

Compassion is also seen in the people's collective support as well as words of encouragement you see on social media, during times when there is a tragedy or when someone is in need. The outpouring of solidarity and compassion is always encouraging and inspiring. 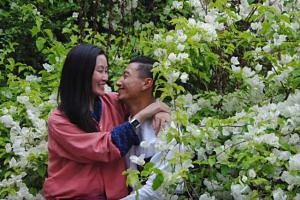 I have also witnessed elderly beggars entering the office seeking alms and they are never turned away. Instead, everyone reaches out for his wallet to give money to the elderly.

Compassion is also exemplified in Bhutan's Prime Minister Lotay Tshering, who is a trained urologist surgeon and treats patients for free, often working after hours and on weekends to tend to the sick.

It is clear that in Bhutan, a Buddhist nation, the cultivation of compassion for all beings is the goal for a life well lived and for society to flourish. And when that happens, it translates to happiness.

BEING CLOSE TO NATURE MAKES ONE HAPPY

It is no secret that being close to nature instils a sense of contentment and happiness to many. This is why for urbanites, a trip to somewhere with beautiful surroundings is always a great way to reset from city lives.

Bhutan is mostly made up of forests and mountains that roll on forever, with dense growth of pine trees that look like broccoli. Conserving and protecting the environment is so important to the Bhutanese, it is mandated in the Constitution that at least 60 per cent of Bhutan must be covered by forests for all time. This has resulted in Bhutan being the only carbon-negative country in the world.

Bhutan may be small in size, but big on ideas, and when people live in an age where the world's most powerful countries are slow to take action against climate change, Bhutan's foresightedness sets it apart from most countries.

• Karen Lim is a former editor at online news portal AsiaOne who married her Bhutanese guide.

• This an excerpt from Lessons I Learnt From Living In The World's Happiest Place, which was first published in Her World Online. For the full article, go to https://bit.ly/2UVD9Ha

A version of this article appeared in the print edition of The Straits Times on March 25, 2019, with the headline 'What Bhutan taught me about happiness'. Subscribe
Topics:
More
Whatsapp Linkedin FB Messenger Telegram Reddit WeChat Pinterest Print Purchase Article Copy permalink