"Seeing the Northern Lights" is a common item on many people's bucket lists, but predictions that a peak period to see the lights is ending this month have sent Singaporean travellers scrambling to Nordic countries such as Finland, Norway and Iceland over the past year before the lights dim.

Scientists say solar activity peaked in 2014 and is now heading towards a lull, when there will be fewer solar storms and less intense solar winds reaching the atmosphere, and hence weaker lights.

This month, specifically, marks the end of an 11-year cycle of heightened solar activity, after which the lights will diminish in the next few years. The next peak of solar activity is not expected till 2025.

With more and cheaper flights to Nordic countries, many Singaporeans have been jumping on the lights bandwagon - some going more than once in the closing window of time to catch a glimpse of the aurora borealis in its glory.

Lightfoot Travel received 150 per cent more inquiries about its Northern Lights and Nordic destinations and bookings for these destinations have tripled in the first quarter of this year, compared with the same period last year. 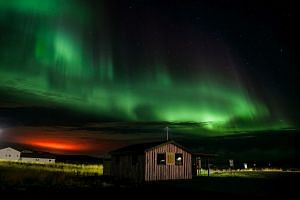 Nature dazzles in all its glory in Iceland, land of fire and ice

She says: "More travel companies are pushing out competitive packages with more choices for these travellers and airfares are also getting very competitive."

She adds that airfares to Iceland, especially, have dropped significantly, compared with traditional Northern Lights destinations such as Alaska. Flights from Singapore to Reykjavik on Finnair start from $1,300 and are less than $300 return from London to Reykjavik. Tickets can be even cheaper through some travel agents.

It is one of the reasons why recently, of the Nordic countries, Iceland is the hottest destination. For the first time last year, the country of about 330,000 people had more than 1.2 million tourists, almost double the 650,000 tourists who visited it in 2012.

The best time to see the lights is during winter, between November and March, but there is also a case for going during the warmer months from June to August.

Although the nights are shorter and Northern Lights sightings much rarer, the roads are free of snow and tourists can use the longer daylight hours to drive around the country and experience its otherworldly landscape of grassy plains, jagged cliffs and milky blue thermal lagoons.

Iceland's tourism bureau says that 40 per cent of its international visitors arrived in summer, while only 29 per cent arrived in winter last year.

Another benefit of the warmer weather is that activities such as caving and whale-watching are more viable.

Like Iceland, Finland and Norway have also become popular destinations for theNorthern Lights and their unique activities such as reindeer sleighs and ice fishing.

Singaporean searches for hotels in Finland went up 132 per cent on Hotels.com last year and Dynasty Travel's Finland itineraries had a 40 per cent increase in bookings in March this year, compared with the same time last year.

Mr Nico Heath, director and co-founder of Lightfoot Travel, says that while seeing the lights is usually the aim of holidays to Scandinavia and Iceland, it is important to create itineraries that do not solely depend on them.

"Mother Nature can be fickle and there is no guarantee you will be able to see this stunning phenomenon," he cautions.

Advertising creative Candy Kang, 41, visited Iceland with her boyfriend in March last year and failed to see the Northern Lights.

They drove "far from civilisation" to no avail. "We endured the cold, saw a million stars, even shooting stars, but no Northern Lights. It was disappointing. It felt like false advertising," she says.

Seeing the lights depends on a variety of factors, including the strength of the solar winds, the light of the moon or nearby cities and the amount of clouds in the sky.

Determined, Ms Kang made another trip last month, this time to Norway, and booked a four-night cruise along the Norwegian coast to the Arctic town of Tromso, where she joined an inland Aurora Safari. It was rainy and cloudy for most of the trip, but on the night of the safari, the sky cleared and there was a bright solar storm. "The green lights were doing a slow waltz in the sky," she says. "I forgot the minus 15 deg C temperature and my painful, frozen feet.

"It was magical, but the tours before and after ours didn't see anything."

Management consultant Eva Chan, 28, also missed the lights on her first trip to see them in Finland in February 2014, so she went to Iceland with friends last November.

To increase their chances, the group made daily checks of local meteorological websites and apps such as Aurora Forecast, More Than Aurora and Aurora Alert.

Over nine nights, they saw the lights thrice. One of the sightings was a strong solar storm which flared in stunning waves of green across the night sky for three hours.

"We were screaming, it felt so amazing," she says.

Whether Singaporeans will continue to book Nordic tours for the coming winter remains to be seen, as travel agents say these tours are typically booked in June and July.

But the summer itineraries are selling well, including those to see the Midnight Sun, a natural phenomenon that occurs north of the Arctic Circle, when the sun is still up at midnight. Around the time of the summer solstice, the sun can be visible for 24 hours.

Dynasty Travel has seen a 15 per cent increase in bookings of its Midnight Sun itinerary and Trafalgar's newly launched Iceland summer itinerary has outsold the five new itineraries to other countries it released for this summer.

Ms Jane Chang, head of marketing communications for Chan Brothers Travel, says agencies are capitalising on the greater awareness of the lights to expand their itineraries to Nordic destinations.

Ms Karen Chan, 38, who works in sales, joined Chan Brothers' 10-day Iceland Aurora Hunt (starting from $3,988, including airfare) in February and says the trip was worth it, even though after hours of searching each night, she saw only faint hints of green once.

"We went horse-riding and on a glacier hike and to see the Blue Lagoon," she says. "Iceland is one of the most spectacular countries I have been to. I have no regrets."

In fact, she hopes to return, in the summer this time, when she can do a self-drive tour and catch the Midnight Sun.

What creates the Northern Lights

A version of this article appeared in the print edition of The Sunday Times on April 24, 2016, with the headline 'Drawn to the lights'. Subscribe
Topics:
More
Whatsapp Linkedin FB Messenger Telegram Reddit WeChat Pinterest Print Purchase Article Copy permalink