While tourists did not let the flood dampen their mood, locals were concerned about the damage to the city's centuries-old buildings

VENICE (Italy) • Last Wednesday, Venice's lagoon subsided and revealed the damage a violent storm had wrought on the city earlier in the week, one of the worst episodes of flooding in decades.

Wind-blown tides reaching 154cm above sea level had submerged more than 70 per cent of the city. The water returned again the next day.

Some tourists frolicked in the filthy water and dined in restaurants as it lapped at the calves of their rubber boots. Locals instead worried about the saltwater eating its way through the city's treasures.

"Here, it's solid," said Mr Pierpaolo Campostrini, a member of the board responsible for managing St Mark's Basilica, as he knocked on the marble facade of the structure, as if listening for a secret passageway. "But here, it's empty. We have a splitting here in the brick and the plaster. The water did this."

He explained that "unlike an earthquake where you see the damage right away", the constant water infiltration, accentuated by dramatic events like last week's flood, would reveal itself only over time.

The building's bricks sponged the water up, and as the water rose, the danger became more acute to the 8,450 sq m of fingernail-sized mosaic tiles that give the basilica its stunning golden shimmer.

The water had already taken its toll on the marble columns, brought from Byzantium centuries ago. 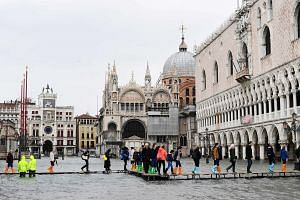 Mr Campostrini pointed at one base, now a corroded green crumble next to an empty cup of pink strawberry gelato.

"It's not just global warming," he said. "But the episodes are more severe and long."

After about 1,000 years, Venice is imperilled by its sinking foundations and rising waters as well as the hordes of tourists arriving on cruise ships and low-cost flights.

They clog the narrow streets and have pushed out residents in favour of Airbnb apartments.

Flooding, though, is the existential danger.

Earlier last week, for only the fifth recorded time in St Mark's nine-century history, the water reached the marble floor inside, submerging the area around the altar of the Madonna Nicopeia.

Last Wednesday, the floor was dry but a yellow sign reading "Attention: Wet Pavement" stood ready by the entrance. Outside, though, the water still filled St Mark's Square.

Last Thursday, high tides brought the water back all across the city, flooding the narrow streets up to people's ankles and shins.

The thumping sound of rolling luggage was replaced by the sandpaper scratching of the plastic bags that tourists bought to cover their shoes and ankles.

Mr Toto Bergamo Rossi, a noted restorer and director of the Venetian Heritage Foundation, called the rising waters "a tragedy" for the monuments he had dedicated his life to protecting.

With ancestors who include some of the most powerful figures in Venice's history, Mr Rossi said he now felt "powerless" in the face of the rising waters.

He mourned the damage done to his restored garden, one of the city's treasures and featured in Gabriele D'Annunzio's 1900 novel, The Flame Of Life.

The city historically became rich from the salt trade, Mr Rossi said, and now the salt had returned with a vengeance as "our big enemy".

A version of this article appeared in the print edition of The Straits Times on November 08, 2018, with the headline 'Tourists frolic as Venice worries about flooding'. Subscribe
Topics:
More
Whatsapp Linkedin FB Messenger Telegram Reddit WeChat Pinterest Print Copy permalink