From the accessible to the luxurious, private islands offer a sense of exclusivity and the cost may not be as astronomical as one imagines

Imagine waking up on a private island, surrounded by glistening white beaches and tranquil blue waters. Fewer than 20 people are around.

There is no TV and the smartphone will struggle to find a connection.

You can swim, do yoga or sit under a palm tree. Sip a cocktail or read a book in splendid isolation. Bliss.

In the movies, private islands are the abodes of the rich and famous. But these days, ordinary people are staying on them too, lured by their remote locations and the chance they offer for relaxation.

Do a Google search and pages of private islands - usually owned by a corporation or individual and hosting one solo resort - from Cambodia's Song Saa Private Island to Indonesia's Pulau Pangkil Kecil pop up.

Experts say private islands are increasingly coming up as holiday destinations because more people are learning about them through the Internet, especially the young or those seeking to visit the unexplored.

Private equity professional Charmaine Goh, 25, visited Telunas Private Island in Indonesia with her boyfriend Terence Chew, 28, who works in a bank as an investment banking associate, in August last year.

The couple spent three days on the island swimming, lounging by the pool, strolling along the beach, doing yoga and going for massages, among other relaxing activities.

Ms Goh says: "We have visited many beach resorts and wanted something less crowded. Something away from the city's hustle and bustle. A private island was a natural choice."

To reach the island, they took a ferry to Batam and then a wooden longboat for 90 minutes to the resort.

She recalls: "During the boat ride to the resort, the scenery changed from one of oil rigs and shipyards to fishing villages to uninhabited terrain."

During her stay, the 12ha island, which can accommodate a maximum of 70 people, housed only about 10 other travellers and she saw them only at meal times and on guided group tours.

Everyone seemed respectful of his surroundings and of one another's privacy. The sea-facing villas were also spread out evenly to ensure everyone can experience his own private moments.

Each villa, Ms Goh recalls, had no air-conditioning or Wi-Fi, but the island had a central generator that provided for essentials such as lighting and hot water.

Her favourite memory of the trip, she says, was sitting on the balcony of her villa in the evening watching the sea with Mr Chew.

"It was therapeutic listening to the sound of the waves. An occasional lone fishing boat would return home with the day's catch," she says.

"The starry sky was also a sight to behold. In brightly lit Singapore, we rarely get to see the sky at its grandest."

The total bill for their stay came up to $755, which includes all meals.

While not inexpensive, the cost of staying on a private island may not be as astronomical as one imagines. 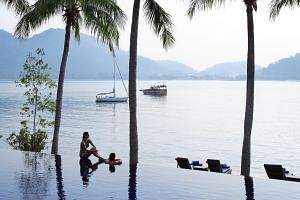 Unplug and unwind on Pangkor Laut private isle in Malaysia

Some islands have been known to cost from $200 a night for two people, excluding meals and transfers.

The cheaper costs may be because more private islands have been mushrooming as holiday destinations within the region in the past decade.

Dr Sin Harng Luh, 34, from the National University of Singapore, says: "Many new islands have come up in the Riau archipelago in the last 10 years after private developers saw them as business opportunities and began developing them into tourist destinations."

The assistant professor, whose research includes tourism, adds that the draw of such islands is the sense of exclusivity they offer.

"You get the sun, sand and sea without having to share it with hordes of people. It's the business class version of staying in a beach resort," she says.

Dr Michael Chiam, 54, a senior tourism lecturer at Ngee Ann Polytechnic, says private islands were previously available only to an exclusive group, who knew about them usually through word of mouth.

"With the Internet, more people are beginning to learn more about these islands and some may be adventurous enough to try them out. Many Singaporeans are well travelled and they are always looking for new destinations and experiences."

But privacy, says Dr Andy Nazarechuk, 58, a tourism expert at Taylor's University in Malaysia, has its price.

He recalls that on a trip to a private island in the Philippines four years ago, his wife's toe was caught between the dock and the boat upon arriving at the island.

He says: "The island's clinic was basic at best, no more helpful than a first aid kit."

Mrs Nazarechuk spent her vacation looking at the beach because she could not go into the water.

Dr Nazarechuk advises: "The same could happen to someone who gets a major sunburn or a stomach virus.

"Because these islands are hard to access, safety and medical attention can be an issue. A small inconvenience can be troublesome on a private island.

"Before visiting, you should think through typical accidents or illnesses that might happen and prepare yourself for them."

And for all the growing popularity of such islands, Ms Alicia Seah, 50, director of marketing and communications at Dynasty Travel, feels they remain a niche segment in the market, appealing mainly to couples on honeymoon or those wanting a romantic weekend.

She says: "Private islands are usually a world without TV, Internet connection and the comfort of amenities.

"Not everyone can enjoy the 'quietness' and 'non-activity' on a private island."

•Next week: Life of luxury on the private island of Pangkor Laut in Malaysia.

Song Saa Private Island, billed as the only private island resort in Cambodia, was founded three years ago and has received several accolades.

It was listed among lifestyle magazine Tatler's 101 Best Hotels in the World in 2013 and was named one of the best hotels in the world by travel guide Fodor's last year.

The resort is spread over two islands - one is 3.5ha wide and the other 5ha wide - in the Koh Rong Archipelago.

To get there from Phnom Penh Airport, take a 31/2-hour car transfer provided by the island to Sihanoukville Port. From there, a speedboat will take guests to the island in 30 minutes.

Accommodation: Twenty-seven villas, with designs inspired by Cambodian fishing villages, can accommodate up to 70 guests.

For example, a one-bedroom jungle villa with a pool is fully air- conditioned and comes with high-speed Internet, TV and hot water.

It also has an outdoor shower and a sundeck.

Facilities: A restaurant and lounge bar that offer views of the sunset, seascapes and starry nights; a swimming pool, spa and wellness sanctuaries; and a yoga and meditation centre on the shoreline.

The island country of Fiji in the South Pacific Ocean is made up of more than 300 islands.

One of them is Laucala Island, a 12 sq km resort where talk-show host Oprah Winfrey reportedly stayed at in 2010 with her partner Stedman Graham. Supermodel Elle Macpherson also reportedly got married to billionaire Jeffrey Soffer on the island in 2013.

In October last year, it became the first resort in the world to include a ride in its own two-man submarine called DeepFlight Super Falcon.

Accommodation: Twenty-five villas, which can accommodate up to 72 people. Each villa is a glamorous version of traditional Fijian dwelling, with a private garden, an infinity-edge pool and a yoga deck. Villas have air-conditioning, hot water, TV and Internet and come with a buggy so guests are free to explore the resort at their leisure.

Facilities: An 18-hole golf course, bars and a jetty.

With more than 17,000 islands, Indonesia abounds with choices for those who love private islands. Among the more well-known islands are Nikoi Island and Pulau Pangkil Kecil.

Telunas Private Island opened in July last year. Located within the Karimun region of the Riau Islands, the 12ha island is three hours from Singapore by boat.

To reach the island, take a ferry from HarbourFront Centre to Sekupang International Ferry Terminal in Batam. There, a Telunas Resorts team member will meet you and guide you to a domestic transfer in a traditional wooden longboat to the island.

Accommodation: Fifteen sea villas, each with an area of 90 sq m, with a maximum occupancy of five people. Each villa includes a sitting room, a private balcony, a king-size bed and a children's loft.

Facilities: A freshwater infinity pool, private beaches and a telescope which islandgoers can use to gaze at the night sky.

If you want to find private islands owned by Hollywood celebrities - from singers Beyonce Knowles and Jay Z to actors Johnny Depp and Eddie Murphy - the Bahamas is the place to look.

Located off the coast of Florida in the United States, it consists of more than 700 islands, most of which are not available for rent.

Those that can be rented include the 283ha Musha Cay, owned by illusionist David Copperfield.

Mr Sergey Brin, co-founder of Google, was said to have married biotech analyst and entrepreneur Anne Wojcicki on the island in 2007. Actress Penelope Cruz also reportedly married actor Javier Bardem there in 2010.

Accommodation: Five guesthouses - each with its own private beach - can comfortably accommodate up to 24 guests. For example, one of the guesthouses, Highview, has a private sauna, two full kitchens, air-conditioning, hot water, TV and high-speed Internet.

There is also a 360-degree view of Musha Cay and its 10 uninhabited neighbouring islands.

Facilities: Tennis court, a beachfront gazebo, a heated pool, a billiards room with Houdini's pool table and memorabilia and an outdoor movie theatre with a two-storey screen.

Made up of more than 7,000 islands, the Philippines offers plenty of options such as Ariara Island. It lies 260km south-west of Manila and features 50.5ha of tropical paradise, with 600m of white sandy beaches.

A staff of more than 35 will tend to your needs and a yacht, with air- conditioned cabins and manned by a crew, is at your disposal for island-hopping and expeditions.

Accommodation: Eight villas, cottages and suites that can accommodate up to 18 guests in total.

Each of the four beach cottages has a large bedroom with a vaulted ceiling, a four poster-style bed, a walk-in wardrobe, an open-air shower and bathrooms with marble floors.

Each also has air-conditioning, hot water, TV and Internet. It is surrounded on two sides by wide verandahs with ceiling fans, as well as a private terrace with a secluded pocket garden.

Facilities: A lodge consisting of a dining hall, a lounge, a shaded terrace and a games area. There is also an infinity pool surrounded by sundecks.

Activities: Water sports such as windsurfing, snorkelling, scuba- diving, water-skiing, wakeboarding and jet-skiing. You can also fish and go island-hopping.

Boasting some of the best beaches in the world, the Maldives in the Indian Ocean comprises about 1,200 islands.

One of them is the 20ha Velaa Private Island, which opened in 2013 and is north of the capital Male. Its calling cards include a golf academy designed by Spanish professional golfer Jose Maria Olazabal and a restaurant featuring menus created by Michelin-star chef Adeline Grattard from France.

Accommodation: Forty-seven villas, houses and residences, which can accommodate up to 130 people altogether.

A beach pool villa, for example, has two bathrooms - one indoor and one outdoor - an outdoor terrace, a gazebo-covered daybed, a swimming pool and an alfresco dining area. It also has air- conditioning, hot water, TV and high-speed Internet.

Facilities: A golf academy, a spa with six treatment rooms and a cloud-shaped reclining treatment pod.