BINTAN - The waves dance, the wooden beams creak, and the kelong sways.

I am at Banyan Tree Bintan's kelong villa, newly launched in July. Located about 800m beyond the shore, it is the most private out of the property's 68 villas.

It takes a two-minute ride on a small wooden boat to get to the kelong, which bobs non-stop on the waves. Experience manager Muhammad Yusuf says it may take an hour or two for my body to adapt, and suggests that I lie down if I feel unwell.

The kelong seems well designed for that. Beanbags adorn the living area, and waterproof cushions line an outdoor sunbed, where I have a clear view of the private beach shared by the Banyan Tree, Angsana and Cassia properties, all part of the Laguna Bintan Integrated Resort.

The water is clear, the sand soft and fine. There are kids playing in the shallows, teens riding banana boats, couples nudging their toes in the shoreline.

To join them, I could text Mr Yusuf for a boat pickup with the villa's smartphone, but decide instead to row there in the kayak provided.

The integrated resort's marine centre offers recreational activities such as wakeboarding, snorkelling or stand up paddle boarding, as well as educational ones such as nature walks and talks on sea turtle and coral reef conservation efforts.

Passing guests stop to peer into the tank of baby hawksbill turtles, tiny creatures nibbling at fish chunks from their afternoon feed. The endangered turtles, born in the marine conservation lab, will be released when they are about three months old to give them a better shot at survival.

I head out to sea on a jet ski, which offers a different view of my temporary abode. The two-storey wooden structure, made from timber and meranti wood, is modelled after fishing kelongs - one of which is located nearby. 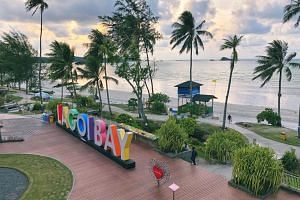 Bintan's new cool: Three new hotels to check out over the next long weekend

Why The Residence Bintan is the ultimate outdoor classroom

I also catch a glimpse of Kampong Bahru, a community of about thirty families I visited earlier that day. The village, which has been around since the 1970s, is just 10 minutes by car. Most residents are fishermen, and women supplement the family income by selling handmade flower brooches made from the dried scales of parrotfish.

Afterwards, I watch the sun blaze its way past Banyan Tree's hillside villas, then catch an amber moon rising from behind Kampong Bahru. It is my first glimpse of moonrise, a rare phenomenon because one has to be low enough to see the horizon, and be facing the same direction as the moon.

There is no television in the villa, although Wi-Fi and a collection of board games such as Scrabble and Monopoly are available. But the constant rocking makes me queasy when I stare at my phone for too long so I go to bed at 9.30pm, the earliest I have slept in a long while.

Ten hours later, I wake up refreshed. Instead of air-conditioning, ceiling fans and sea breezes have kept me cool. Translucent privacy screens block out the morning sun. By the time I check out, I have still not found my sea legs, although I've enjoyed the peace and quiet.

The next kelong villa will be launched by the end of the year, right next to the current one. If you value solitude, now is the best time to go. But those with weak stomachs should steer clear.

Banyan Tree Bintan is about 15 minutes' drive from the Bentan Telani Ferry Terminal. Prices start at $840 for a night in the kelong villa, including return land transfers, breakfast, tea, dinner and a massage for two as part of the launch offer.