Explore an active volcano, soak in a sand bath and dip into hot springs while crossing the island in south-west Japan on a scenic train journey

As the powerful steam locomotive rumbles and roars through the rustic Kumamoto countryside in Kyushu, a party of four grey-haired ojisan (Japanese for uncles) clumsily clutch their beer cans with one hand - and wave the other excitedly at some middle-aged women.

The women - one with rollers in her hair - are sitting on the wooden veranda of a traditional Japanese house just 10m from the track. They return the gesture, giggling like schoolgirls.

My host leans over and urges me to do the same. The locals call this cordial gesture "tewofu-rail", where passengers and people along the railway track wave at one another as the train passes by.

"Don't be shy," she says, as the jet-black SL Hitoyoshi chugs down the line from Kumamoto to the former castle town of Hitoyoshi, filling the sky with clouds of coal smoke. For the rest of the 144-minute ride, locals stop in their tracks to wave at us.

I wave back. After all, a ticket for the train, one of the few steam locomotives still in service in Japan, is not easy to come by, requiring a reservation weeks before a trip.

From my window, Kyushu's scenery unfolds. The emerald green waters of the Kuma River - one of the fastest waterways in Japan - and the majestic mountains in the distant horizon slowly come into view to the clickety-clack soundtrack of the old-fashioned carriages furnished with classic wood interiors.

It is my fifth day on a week-long rail adventure and I can see why some city dwellers go on train getaways to find the rhythm of life.

During my trip, dubbed the "crazy train lover's itinerary" by my guide, Kyushu reveals itself as one of Japan's best-kept secrets, with none of the frantic rush of tourist hot spots like Tokyo and Osaka.

The most southwesterly of the country's four main islands is blessed with rolling grasslands, active volcanoes, cherished heritage sites and plenty of hot springs.

Our jaunt starts on the north shore in Fukuoka, birthplace of tonkotsu (pork bone broth) ramen, or Hakata ramen, as locals call it.

We pause by Hakata Issou, a modest ramen shop run by two brothers which has long lines on most days. 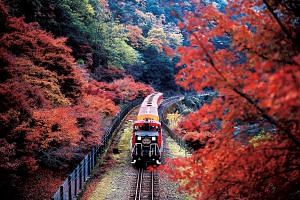 Like most places, ramen here is ordered and paid for at a vending machine at the entrance. A bowl of ramen, topped with locally sourced pork belly, green onions and soya sauce, costs from 600 to 1,000 yen (S$7.30 to S$12.15).

When we have our tickets, a staff ushers us to the counter seats in front of three large stock pots filled with the creamy white pork broth.

Later, I learn that the rich and frothy soup, which fans aptly call "tonkotsu cappuccino", is continuously moved between the stock-pots and slow-cooked for hours.

And like the coffee, it leaves our jet-lagged and sleep-deprived bodies craving for more.

For tourists, Fukuoka is the ideal launchpad to the rest of Kyushu.

The next morning, after a two-hour train ride south-east from the island's most populous city, our host brings us on a fast march up the main street of idyllic hot spring resort Yufuin.

Never mind that we are distracted by the soft-serve ice cream stalls, artisan bakeries and chic cafes lining the walking route.

Our aching - and hungry - bodies are soon rewarded with dramatic views of Lake Kinrin, whose calm waters reflect the tree-covered mountains towering over the valley town. The lake is known for its morning mists during the autumn and winter months.

Picturesque scenes like this play on repeat from our front-seat views when we journey on the Aso Boy!, travelling south from the coastal city of Oita to Aso, best known for Mount Aso, the largest active volcano in Japan.

In the carriage behind ours, a wide collection of picture books and a pool filled with wooden balls keep restless children occupied. The train has a cafe with a low counter for kids to buy goodies.

A nearly two-hour ride takes us through verdant rice paddies and sunlight-dappled forests unspoiled by tourists.  But the views do not end there, as we get on board the bus that carries us up magical woods to Kusasenri, the spreading prairie at the foot of Mount Aso. A one-way bus trip costs 650 yen.

We get off half an hour later only to find ourselves running from the cold winds and drizzle.

Kusasenri is where Mount Aso, one of the world's largest active volcanoes, can be seen in its full glory. We seek shelter inside a cafe at Aso Volcano Museum, admiring the smoking crater of Nakadake not far from us. Lovers of the outdoors can pick up a hiking map at the museum and go on routes to various peaks like Mount Eboshi.

The next day, we embark on a 50-minute bus ride from Aso to Kurokawa, a laid-back onsen village located at an altitude of 700m.

Here, it is not uncommon for visitors to go onsen-hopping. Plenty of bathhouses dot the small town on the hillside, along the river or overlooking waterfalls.

Hot spring seekers may choose to pick up an onsen-hopping pass, which lets them dip in three different outdoor baths for 1,300 yen.

We set foot in Ikoi Ryokan, which costs 500 yen a person.

It is 10 deg C outside. With a tiny "modesty" towel, I hastily enter the outdoor bath with a grand view of a nearby waterfall and several men in the buff.

"Slowly, slowly," utters a smirking, young Japanese man as I step into the almost unbearably hot waters and attempt to look relaxed.

After a few awkward minutes, I sit back, make a pillow of a nearby rock and soak up the autumn colours.

It is believed that the waters help relieve fatigue and smoothen the skin. Some hot springs are also said to treat rheumatism, anaemia and skin issues like acne.

The pampering is followed by a punishing rail journey up mountains and over seas.

In a span of seven hours, we are on three trains - the SL Hitoyoshi, Isaburo/Shinpei and Hayato no Kaze - taking us south from Kumamoto to Kagoshima, a seaside city with views right out of a movie set.

Famous for using that stunning scenery are the Sengan-en gardens, with the active Sakurajima volcano and facing Kinko Bay as the backdrop in their design.

The sprawling Japanese-style gardens were built in 1658 by the influential Shimadzu clan, which ruled Kagoshima for about 700 years. Their presence is marked by a circular crest with a cross in the centre.

At 5pm, we are probably the last to enter the attraction, which includes bamboo groves, shrines, small ponds and a stately home. And thankfully so, as we manage to bask in the warmth of the evening sun with the gardens all to ourselves - if only for the 20 or so minutes till closing time.

Sengan-en and the adjacent Shoko Shuseikan museum, where visitors can learn about the history of the Shimadzu family and its efforts to modernise Japan, were designated a Unesco World Cultural Heritage Site in 2015.

Those with more time may want to tour the house that received important dignitaries back in the day and explore the rooms the clan lived in.

Kyushu may be a haven for those looking to have a dip in bathhouses. But at Ibusuki, at the southern end of the island, you can soak in naturally heated sand.

At Sayuri Natural Sand Bath, a 20-minute drive from Ibusuki station, we change into yukatas (light kimono-like robes) before heading out to dug plots of gravelly, black sand waiting for us.

"Here," says an employee, pointing to a bed of sand. The hot sand, heated by steam from below, is said to improve blood circulation and relieve neuralgia, asthma and anaemia.

He wraps a towel around my head - leaving my face exposed - and shovels sand until the rest of my body is covered. "Fifteen minutes," he advises, pointing at a large clock in front of me.

I try to nod, but my head is immobilised by the mountain of sand heated to 55 deg C.

I start to perspire and feel my legs and arms pulsating under the weight. I take deep breaths - half regretting the heavy lunch of cha shu ramen and fried gyoza I had earlier.

After shaking off the sand, I enter the regular bath for a more familiar onsen experience.

For those who prefer a dip in traditional hot springs, there is Tamatebako Onsen just a few minutes' drive away.

The spot offers an unparalleled view of Mount Kaimon and the East China Sea. Imagine settling back in a heated infinity pool that stretches towards the sea in the horizon.

In Kyushu, no rail adventure is complete without a commute on the shinkansen (bullet train), an engineering marvel that can reach speeds of more than 300kmh. It takes us back up from Kagoshima-chuo station to Fukuoka in 75 minutes - just in time for dinner.

We stumble upon some yatai stalls scattered along the streets of Tenjin. These makeshift food stands, offering simple fare like Hakata ramen, oden (Japanese-style yong tau foo) and grilled skewers, pop up as dusk falls and disappear quietly before the sun is up.

We stop at street-side Yatai Kisa, manned by three cooks - two are former customers - who take orders, mix drinks, cook, wash and still squeeze out time for a chat.

At 8pm, the place is packed. I find myself shoulder-to-shoulder with others on long benches enveloping the modest stall, which is about the size of a mini-van.

I look up from my plates of pan-fried gyoza, braised beef tendon and mentaiko chicken wings to find many of the stall's 14 patrons - strangers a while ago - in deep conversation.

Soon enough, they learn that there are Singaporeans among them and proceed to talk animatedly about their escapades on the island, notwithstanding the language gap.

A cook, wiping his greasy hands on his already grubby apron, gestures for my phone and takes a few photos of us at the stall for us as a keepsake - without us having to ask for one.

About a dozen more dishes and a few whiskey highballs later in the too-close-for-comfort quarters, I realise it is not the unspoiled landscape or the efficient transport system of Kyushu that leaves an indelible impression on foreigners, but the authentic and warm hospitality, or omotenashi, that the locals are known for, that I will cherish.

When you are touring a few areas in Japan, commuting by rail is recommended. Besides being cheaper than getting individual tickets, the Japan Rail Pass, commonly known as the JR Pass, offers savvy foreign travellers unlimited journeys on various forms of transportation run by the Japan Railways Group.

It can be used on most trains operating on the nationwide railway network, including bullet trains, as well as other means of transportation, such as buses and ferries. Klook is giving a $60 voucher for every JR Whole Japan Rail Pass bought through it.

ST readers can get a $10 discount when they use the promo code KLOOKST. Terms & conditions here.