The Nordic country offers natural splendours such as the Northern Lights, waterfalls and geysers

This article first appeared in the March 2015 edition of The Life digital magazine from The Straits Times with the headline "Nordic grandeur".

As the stunning Northern Lights dance across the starry skies, an orange glow from the erupting Bardarbunga volcano illuminates the background.

In the midst of this spectacular show by nature, shooting stars blaze across the sky.

To gaze on all these wonders in the same moment – aurora borealis, fiery lava and falling stars – is such a rare phenomenon for my city eyes. I feel small as I marvel at the wonders of the universe and blessed to be a spectator at this splendid show.

It is about 2am outside Hotel Reynihlid, in the Lake Myvatn region, about a six-hour drive from Iceland’s capital Reykjavik.

My partner and I are here with four other friends. For over an hour, we park ourselves outside in the biting subarctic cold, hoping to catch a glimpse of the elusive aurora borealis.

A part of me is doing so grudgingly. Leaving our toasty rooms to wait in the cold, with the temperature hovering around zero, does not sound like a great idea. The sceptic in me is also not hopeful – it has been six days into our eight-day trip, but the lights evade us because the skies have been overcast, a grey blanket that obscures the prize.

But the Northern Lights top our to-see list, which also includes Iceland’s waterfalls, glaciers and the Blue Lagoon geothermal spa.

The Nordic country is a place of rejuvenation, an escape from the hectic urban life. I also hope to push my unfit self, lining up treks and hikes for the trip.

So we head out anyway, even as unforgiving winds numb our faces. Thankfully, our patience is rewarded when the aurora borealis makes its entrance: The night sky is streaked faint green.

Gradually, the lights grow in intensity and envelop the heavens. They dance across a black canvas dusted with sparkling stars, then evolve into different hues of mostly green but with hints of pink.

When the fickle mistress that is the aurora borealis finally shows up, she is unforgettable and totally worth the wait.

Rooted to the ground, we watch the impressive display in awe for the next hour or so, shoving thoughts of the cold to the back of our minds.

The ephemeral, gentle stream of colours in the sky is a stark contrast to the ferocity of Iceland’s waterfalls.

The country’s collection of waterfalls comes in all shapes and sizes, from cataracts that slice through hill ranges, to towering ones.

Over our eight days, cascading waterfalls are a beguiling staple.

We see them at least twice in a day with our guide-cum-driver, Orri Ragnar Arnason Amin, 46.

The very first two we see are on a tour of the Golden Circle, a popular loop among tourists. It covers the Thingvellir National Park, the majestic Gullfoss waterfall and the Geysir geothermal area.

Gullfoss is one of the most famous waterfalls in Iceland. It consists of two waterfalls – the upper is 11m and the lower one 20m.

It throws mist at its admirers, creating rainbows whenever the Icelandic sun peeks out.

At times, the flow can be so rapid that it can fill 60 shipping containers in one second.

In Iceland, many waterfalls are also hidden beauties that reward the physical climb to a vantage point.

At the Seljalandsfoss, where water drops about 60m over the cliff, we climb a slope to get behind the waterfall for a different view – and immerse ourselves in the therapeutic sound of gushing waters.

We also hike for about an hour in the Vatnajokull National Park to see the Svartifoss, a waterfall surrounded by dark lava columns.

While Svartifoss is like the prize at the end of the trek, the walk itself is its own reward. We pass a serene and picturesque forest, and walk along tracks that abound with nature and are edged with wildflowers.

On the whole, the trail is gentle but it is interspersed with uphill slopes that may require stamina.

One of the most memorable waterfalls is the 12m-tall Godafoss, waterfall of the gods.

It derived its name in the year 1,000AD. It was the year that the chief of a district ruled in parliament that Icelanders should adopt the Christian faith. He went home and threw his statues of pagan gods into the waterfall.

But though waterfalls seemingly appear at every other turn of the road in Iceland, the country is called the land of fire and ice – and for good reason.

We visit the Jokulsarlon glacier lagoon one afternoon and it feels like I am in another world altogether.

Upon arrival, we gear up, wearing layers of clothing for protection from the freezing waters, a lifejacket as well as a pair of snowshoes over our winter boots.

We take a boat out to the lake with our guide, and the tranquillity of the place and undulating waters engulf us. It is the perfect winter playground: vistas of ice stretching endlessly and shrouded in mist, as we slowly sail on the deepest lake in Iceland (around 250m).

We are surrounded by innumerable icebergs, some possessing a bright blue colour, caused by the interplay of light and ice crystals.

Our guide later pauses in the middle of the lake, and scoops up a breakaway piece from an iceberg. “Try it. This is the purest form of water you will taste,” he says. It tastes like extremely cold mineral water.

In Iceland, encountering the out-of-this-world landscapes is a humbling experience. Often, we are the only people in the various locations while there is an abundance of land and endless volcanic rock and land as far as the eye can see.

A version of this story first appeared in the March 2015 issue of The Life e-magazine in The Straits Times Star E-books app, with the headline "Nordic grandeur".

Finnair flies from Singapore to Helsinki, Finland, taking about 13 hours. From Helsinki, take a one-hour flight, also on Finnair, to Oslo, Norway, followed by a 21/2-hour flight to Iceland’s Keflavik International Airport on Icelandair.

This reporter’s eight-day trip – excluding the arrival and departure days – is customised by Discover Iceland (www.discover.is) for about $3,350 a person.

The price covers accommodation, a guide who doubles as a chauffeur, the use of a vehicle and most of the activities in Iceland (such as snowmobiling, a Jokulsarlon glacier lagoon tour and a trip to the famous Blue Lagoon geothermal spa). Meals are not included.

Icelandic krona (100 krona = S$1) is used and there is a currency exchange at the airport. Credit cards are widely accepted.

Discover Iceland’s itinerary for this trip stops at a different hotel every night. Some good hotels are:
Hali Country Hotel (www.hali.is), located 12km from the Jokulsarlon glacier lagoon. Guests have a choice of its guesthouse, apartment or hotel; some rooms face the Atlantic Ocean. The hotel is also located in a good spot to catch the Northern Lights. A double room costs about $265 a night.

Hotel Reynihlid (www.myvatnhotel.is/en/home-reynihlid) in the region of Lake Myvatn is where this reporter saw the aurora borealis, with the erupting Bardarbunga volcano in the background. Rates are about $204 a night for a double room.

The Saeluhus apartments (www.saeluhus.is) is located in Akureyri, Iceland’s second largest urban area and a fishing port. This reporter stayed in a three-room apartment overlooking the quaint town and a lake. There is a jacuzzi in the balcony, where one can see the lights while soaking in the hot tub. Prices start from about $352 for a three-bedroom house with a hot tub.

This article first appeared in the March 2015 edition of The Life digital magazine from The Straits Times with the headline "Nordic grandeur". It appeared in the Life section of  ST on April 5, 2015. 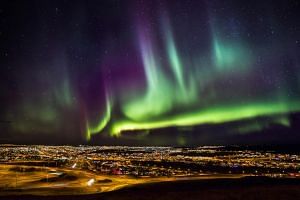